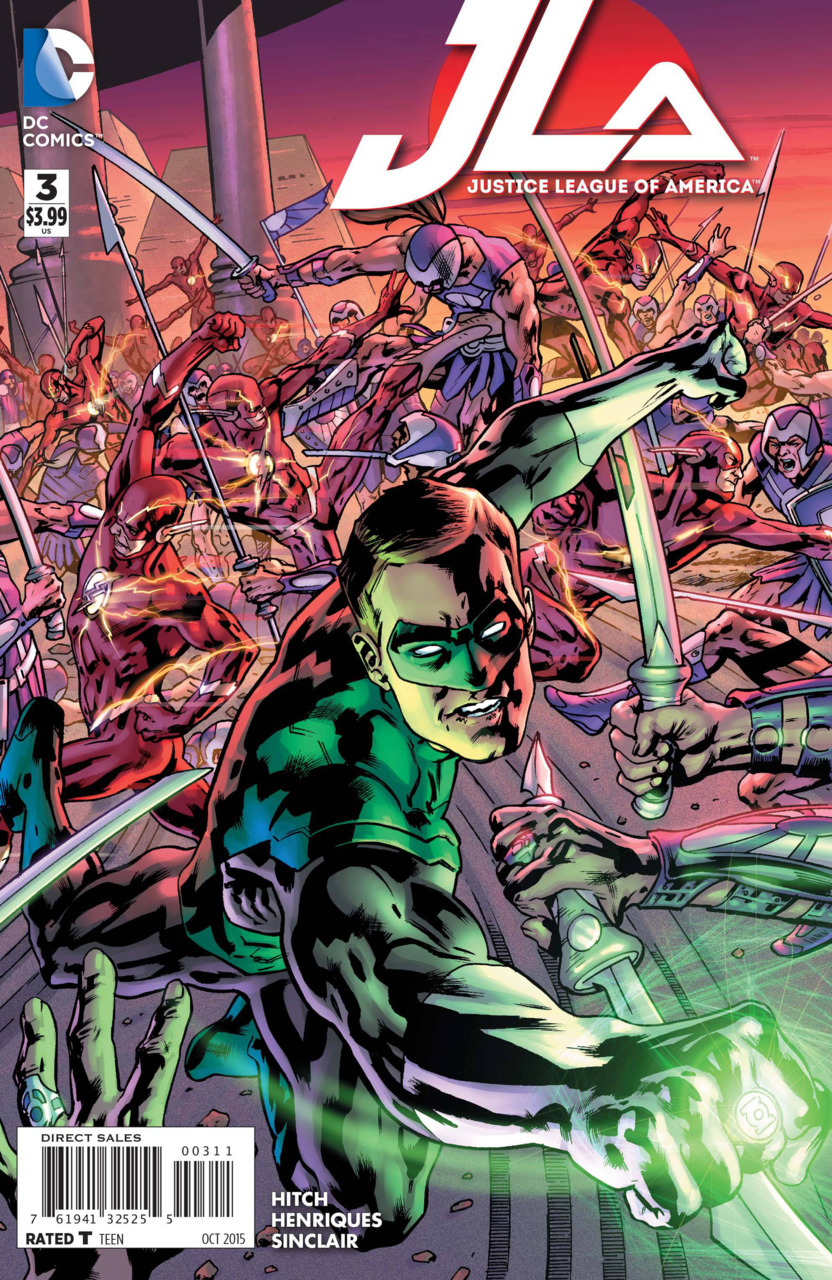 As this issue opens, we see Flash and Green Lantern expelled onto the ground amidst a massive battle. Attempting to determine where they are, Flash causes a distraction which holds back the two opposing armies as Hal charges up his ring by making the Oath. Once charged, GL knocks out all the opponents with a multi-boxing gloved punch. Attempting to stand, GL finds that the gravity is much heavier than that of Earth and asks his ring where he is. After some calculations, the ring states that they are on Krypton…approximately 250,000 years before their departure date. It is eventually determined that opening the wormhole with the ring, mixed with Barry’s Speed Force energy caused them to time travel to the not destroyed Krypton.

Cutting to the remnants of Olympus, Wonder Woman comes across an Oraculum (a divine announcement, turned into a creature for the purposes of the story). Wonder Woman questions what happened to Olympus and to the other gods, the Oraculum states that they fled due to fear “the end of everything.” Wonder Woman then learns that whatever destroyed Olympus has also trapped her within its destructive void.

Back on Earth, Rao continues to astound the world and sway many to his cause. Via a news report, we learns that almost all major hospitals are empty as Rao and his disciples continue to heal the sick and dying. Arriving at a famine relief shelter, Rao takes the people to Africa where he creates a paradise to help the less fortunate eat and prosper. He then goes around dismantling every warlord and corrupt regime across the continent. Arriving at the UN, Rao speaks with the delegates who seem concerned about his actions…Rao states that he will not be stopped in his work, and will become more forceful if necessary.

Meanwhile, Batman and Superman discuss the sudden arrival of the Kryptonian god. Batman seems hesitant to trust while Superman seems to have thrown all of his trust into Rao. Batman ultimately wants Superman to question Rao’s choices and make an informed decision…Batman departs that he wants to believe in Superman again.

We then cut back to the strange room seen at the beginning of issue #1, where the multiple versions of the future Supermen kept showing up. As the group discusses the events, the Flash is suddenly transported to them…having disappeared from Krypton after distracting the warring armies. Back on Krypton, Green Lantern is approached by one of the armies and the issue ends as he speaks with them and they state that they will bring him to the city of Kandor to meet the great Rao.

I have to say that I was a little disappointed in this issue. I liked that we got a little bit of explanation in regards to where Diana is and what happened to Olympus…as well as where Flash and Green Lantern ended up. But, ultimately nothing really happened in this issue.

We get to see Rao once again helping out the world (which we have seen) and we see Batman questioning Rao’s actions (which we have seen). Our only new points come from Superman and Batman’s discussion which I found interesting…instead of attempting to prove his point against Rao, Batman appeals to Superman’s humanity and his inherent need to seek the truth. In addition, Green Lantern ending up on Krypton in the distant past is pretty interesting…I assume we will see origins of Rao’s plans and possibly his motivations for whatever he seems to be trying to accomplish on Earth.

Overall this was kind of a stale issue with only a few moments of excitement…and almost no action whatsoever. Although I feel this issue may prove integral in the overall story, this is definitely a low point in the series thus far.