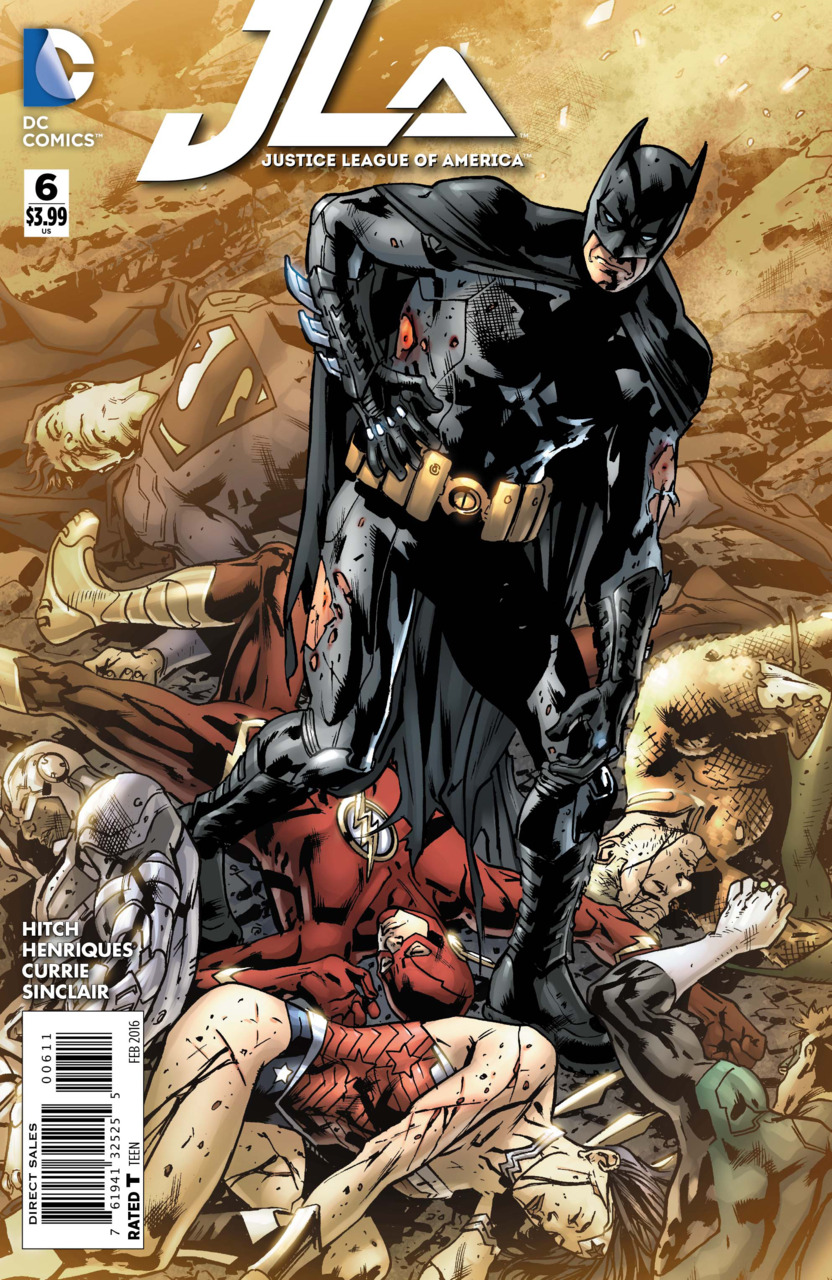 After too many months of waiting for this issue, we resume with Aquaman confronting some of Rao’s prophets at The Temple of Poseidon in Atlantis. Arthur has just returned to find that the Atlanteans have given their lives to Rao, making him their king. He attempts to take on one of the prophets but is trampled by a group of his former people.

In Themyscira, home of the Amazons, it appears as if more of Rao’s prophets are fighting Amazonians while some of them are seeking coordinates for Atlantis. This scene concludes with a prophet stating that “triangulation is complete” and there is a strong signal and preparations for transfer are commencing.

At the Fortress of Solitude in the Arctic, Superman defeats all of Rao’s prophets. Confident and seemingly victorious, he faces Rao himself, questioning, “Best you got?” We, then, see Rao owning Kal El for nearly five speechless pages, wrapping up with Rao staring over a defeated Superman, wishing Clark would’ve only turned and believed in him.

At the Infinity Corporation Building, Flash wakes up in 1961. He quickly scans throughout the building, finding the stones of forever. Vincent and his team race to the room, knowing Barry would end up there. After admitting that Vincent sent Barry the invitation to fight the Parasite (see issue #5), Vincent shares with the Flash about the coming crisis that may “destroy forever.” He shows Barry how the stones are revealing small glimpses of this to them. The Flash resolves that he needs to go back to the future to gather the rest of the League because they are better together.

In Olympus, while Wonder Woman is processing what happened in the Parasite battle with someone else, she turns over her right shoulder and asks, “What’s that?”

Back in Atlantis, Aquaman demands that Rao’s prophets tell him their master plan. They respond, stating that they will “ensure that Rao is the one true God on earth.” While Aquaman attempts to stop one of the prophets, he hears a familiar voice: Wonder Woman. Traingulation appears to have brought Atlantis, Themyscira and Olympus together. As Aquaman and Wonder Woman try to catch each other up on what’s been happening, one of Rao’s prophets commands the others to give their lives to Rao. Simultaneously, they do so, completely destroying the planet they were on.

The issue concludes in Krypton 250,000 years ago. Green Lantern is traveling with Rao and his prophets to a citadel to discover what threatens the peace of the Kryptonians. Rao and Green Lantern enter the citadel alone. As they step inside, they stare upwards at what appears to be an immense and towering structure.

Overall, I enjoyed this issue and this series so far. It’s unfortunate how many complex storylines are running at the same time. Each calls for my attention but I am unable to engage each one as well as I’d like due to 1) the fact that there are almost too many to understand in one book and 2) the wide gap in between each issue that we’ve seen thus far due to Hitch’s inability to meet deadlines.

Although Batman is the main character highlighted on the cover barely standing battered over his seemingly defeated fellow League members, he nor Cyborg are included in a single panel of this issue. Even with Superman receiving a cinematic seven-page battle with Rao, Hitch only gave them two lines of dialogue. Essentially, this issue is about Aquaman, Wonder Woman, the Flash and Green Lantern. I do find the numerous storylines to be interesting but hope for everyone’s sake that they start connecting and resolving soon, preferably in the next issue or two. It seems at the end some items are already intersecting although I find myself with more questions than before.

For the most part, I found the art to be incredible. Hitch and his art team of Henriqeus, Currie and Sinclair delivered two breathtaking fight sequences: one between Superman and Rao that climaxes with a two-page spread of Superman being blasted through a mountain and the second being Aquaman and Wonder Woman battling Rao’s prophets on what’s left of Olympus. This second fight sequence builds to another fantastic two-page spread of Olympus exploding after Rao’s prophets give their lives to Rao.