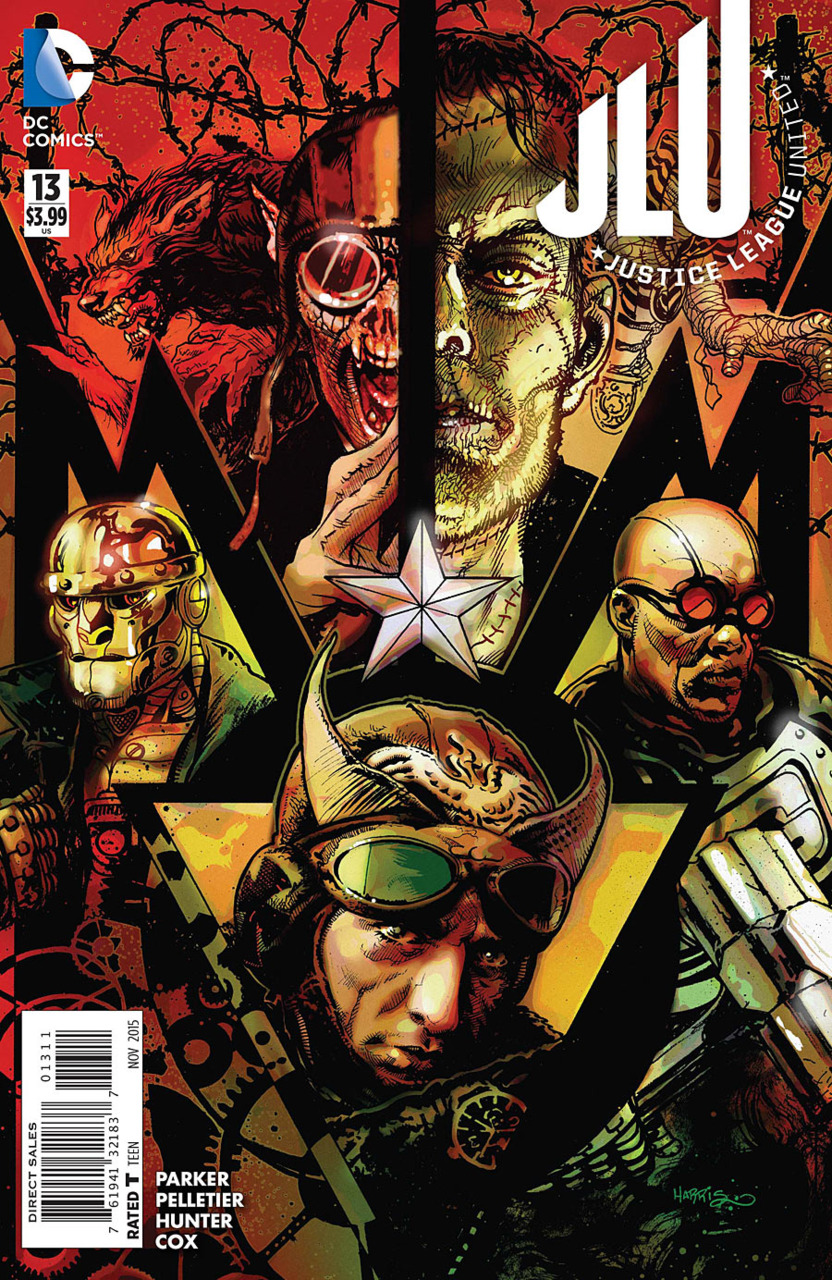 This issue opens upon a battlefield in Arracourt, France during the year 1940. Leading Easy Company, Sgt. Rock orders his men to search the town for locals and meet at a point in the South End. Entering a home, Rock finds a young man who seems to be patiently waiting for the German soldiers to arrive. Identified as Vandal Savage, Rock accosts Savage for his choice to align his town with the Germans. Explaining that he chooses to align himself with the victor of war and wait for the fighting to end. Promising that if he ever met Savage on the battlefield again he would be history, Rock leaves.

Cutting back to the present, Animal Man and Alanna Strange are busy trying to apprehend Savage as he is required to aid the JLU in their next mission. Using a zeta beam to teleport away, Alanna brings them to the resting point of Adam Strange. Explaining that her husband became trapped within a the beam, he can now see breaker points in time/space and is able to see which heroes/villains will be needed to complete the mission and take down the enemy. For this mission, Strange has assembled Batgirl, Robotman, Steel and Equinox alongside the newly arrived Vandal Savage.

Arriving in Arracourt, France, the JLU witnesses a convergence of space/time around the town…seemingly uniting several points of war and battle throughout history. Charging into the fight, the JLU begin battling against the many combatants and enemies. Launching himself in front of a tank’s barrage, Robotman manages to save Batgirl from destruction. However, he is quickly incapacitated by an alien tripwire that causes Steel to reboot his systems. Scouting ahead, Batgirl and Stargirl realize that the different realities aren’t necessarily fighting each other, but their original enemies. Flying higher to ascertain where the breaking point is, Stargirl is knocked out of the air by Enemy Ace…realizing she is a woman, Ace catches her.

Stating that they will have to split up in order to save Stargirl and accomplish their mission, Vandal Savage is suddenly hit from behind. The issue ends as it reveals that Sgt. Rock and Easy Company have returned, and Rock intends to make good on his promise.

Premiering within the pages of “G.I. Combat,” this story sees the return of the famous WWII comic hero known as Sgt. Rock. The infamous leader of Easy Company, where nothing is ever easy, this issues shows an encounter during the war between Rock and the immortal Vandal Savage. Used as both a segue to Savage’s presence in the JLU mission and a setup for a confrontation which we will see next issue, I really liked Rock’s inclusion within this story as he is a character that I have only seen and read during the “Futures End” storyline several months back.

As for the Justice League itself, I have only managed to read the first storyline in this series…but I definitely like the idea of shorter stories with different variations on the team. In the previous story, it was shown that Mera, Swamp Thing, Poison Ivy and Equinox came together in order to seal a breaking point…and now we have Batgirl, Savage, Steel and Robotman joining up with Stargirl. I think it’s a great idea to include different characters from various “families” as it can unite the fans in order to read the book. Likewise, it also helps people to see different characters that they might not normally read about. As for the appearance of Batgirl, she seemed pretty well represented in this story…teaming with the younger Stargirl and having the same attitude as has been displayed within the “Batgirl” series recently.

Overall I liked the change in direction for this series, and I will definitely go back to read exactly how Adam Strange became trapped within the zeta beam. I think it’s an interesting twist for the character to become an almost prophetic or precognitive oracle…somehow breaking through the space/time barrier to see which characters are needed to accomplish the task at hand.