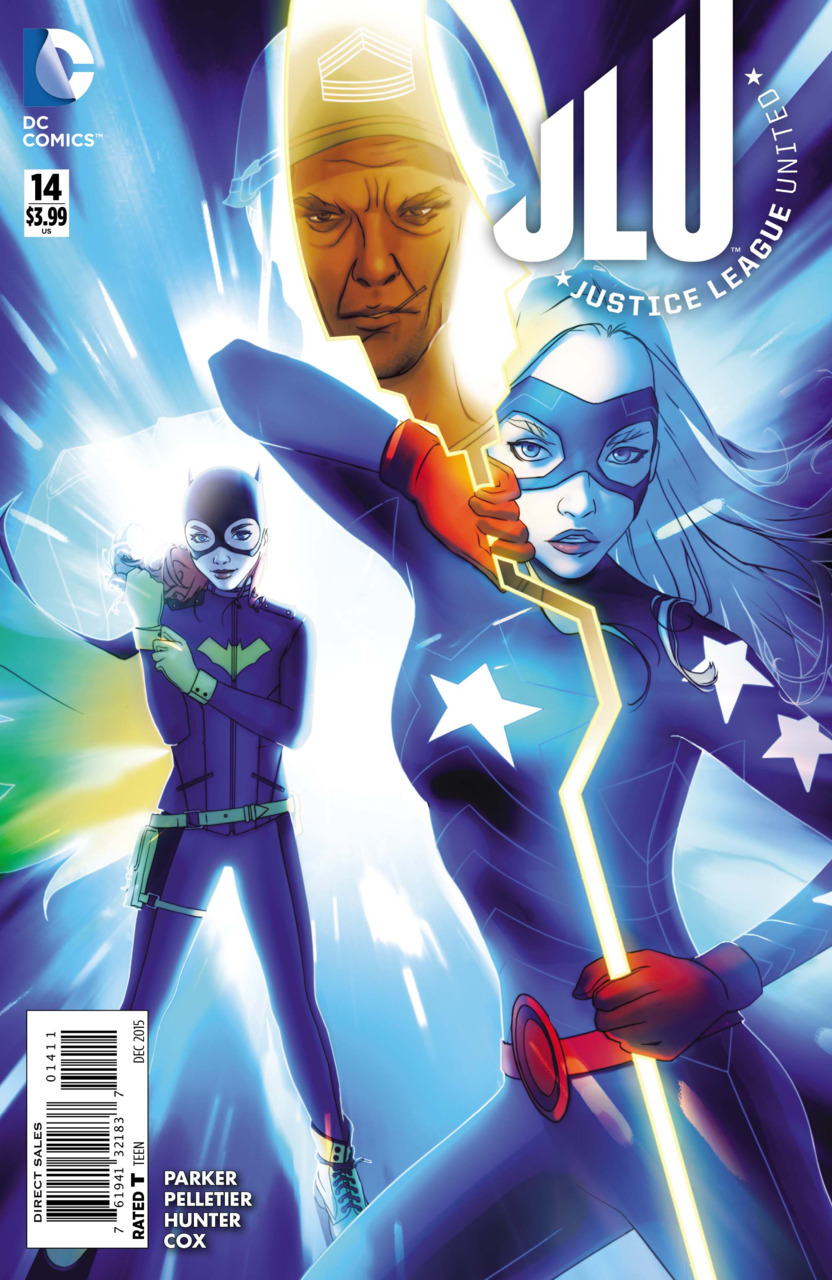 Opening up where the previous issue left off, the first panel shows a soldier after he has been impaled by Stargirl’s falling cosmic staff. As Easy Company calls for a medic, the heroes of the JLU continue to fight against the onslaught of soldiers. After taking a direct hit, Steel and Robotman plummet to the ground…meanwhile; Sgt Rock holds Vandal Savage at gunpoint as Batgirl looks on from the shadows.

Taking Savage to the cafe where he was previously seen last issue, Rock interrogates the villain as to why he ended up turning on his Nazis allies…Rock explains that they found documents and other bits of information left behind after Savage’s departure. Vandal comments that the his former allies broke their deal and then attempts to explain the time loop that has them all trapped. Suddenly Batgirl drops onto the soldiers and frees Savage.

Elsewhere, Enemy Ace offers Stargirl some water in an apology for shooting her out of the sky…realizing her staff is missing we cut back to the battlefield to see the impaled soldier is none other than the GI Zombie – a member of the Creature Commandos. As Batgirl and Savage are running down an alleyway, they stop quickly as Nazis soldiers approach…coming to a hidden tunnel (that Savage originally used to escape) the two arrive outside the city but are quickly ambushed by soldiers…a mine goes off suddenly that engulfs them as Batgirl looks on horrified.

As Enemy Ace and Stargirl continue to walk through the forest, the pilot explains how he continually finds upgraded ammunition and food at a certain point near the village. In the distance, a bandaged soldier can be seen following them. Back on the battlefield, Robotman manages to take down some of the commandos as Steel revives from the fall. As Irons wonders how they were able to shoot the pair of them down, the issue ends on the final panel revealing OMAC to be the one to have done so.

Another action packed issue of Justice League United finds our heroes (and villain) deep within the battlefields pitted against enemy soldiers, the Creature Commandos and OMAC. Although the story was action packed, I liked that Jeff Parker manages to have some good story woven in throughout the fighting, I find the WWII story with Savage and Easy Company really interesting and I am looking forward to the showdown which is definitely going to happen in the next issue.

I’m also wondering who the bandaged soldier is that is following Stargirl and Enemy Ace around…could this be someone that will help out our heroes to take down the breaker point? My guess is that this character is either the Unknown Soldier (fits with the theme) or Negative Man from the Doom Patrol…simply due to his bandaged visage.

I also like Batgirl’s action within the issue, she holds herself up well against Easy Company when she rescues Vandal Savage and the look of absolute horror on her face when the soldier steps on the landmine is spot on her character – does she believe she caused him to step there due to her thrown batarangs?

Overall I am really enjoying this series change of direction…having gone back and read some of the beginning of JLU, I rather enjoy the alternating team ups that see different groups of characters appear throughout the series. I will be rather sad to see this book leave come December due to it’s cancellation.