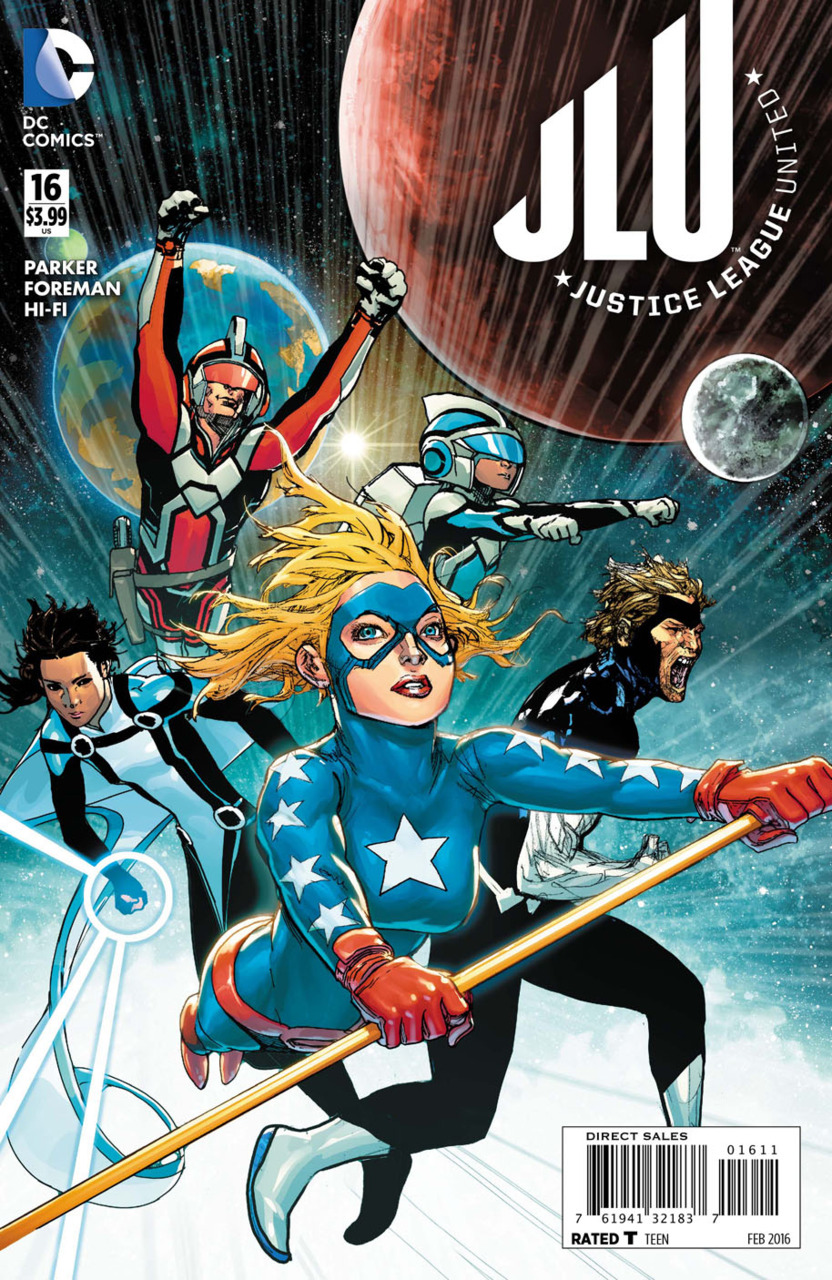 As we open on the final issue of “Justice League United,” Alanna Strange is thanking an unknown group of people for joining her. She tells them that she is ready to let them know how Adam (her husband) became trapped within the Zeta Beam.

Flashing back to two months ago, Alanna and Adam Strange are talking to Sardath (a Ri-Level Thinker, Prime Technigog of Rann) and they are discussing the occurrences of the breakers on Earth. The usage of the Zeta Beams has apparently attracted their enemies and they have targeted Earth itself. Back on Earth, the Breakers have launched an attack on western Connecticut and the JLU is on the scene in order to help.

The Stranges arrive but Alanna becomes trapped within the force field placed around the town alongside the other members of the JLU. Leaving his wife, Adam begins blocking the roads into the town to stop others from getting trapped inside. Searching around for the mysterious Breaker, Alanna and the Justice League United discover a house that didn’t seem to exist prior to the confinement. Entering the domicile, the League begins wondering through the house and meet Abel who identifies himself as the caretaker of the house. Traveling through the house, the League begins opening doors which Abel warns will also open secrets that the house has been keeping. Equinox witnesses a bizarre ritual, Stargirl sees the death of Boston Brand, while Animal Man watches the Kents rescue a baby Kal-El from his spaceship.

Realizing that the house is the source of the force field, Adam is led to believe that Alanna has somehow left Earth via the Zeta Beams. Charging into the house of secrets, Adam finds the JLU deep in battle with the house itself. Telling Alanna that he loves her, Adam kisses his wife and activates the Zeta Beam within the house…destroying it in the process.

With her husband now missing due to using the Breaker controlled beams, Alanna searches for Adam through the beams. Eventually she finds his consciousness which has achieved an almost omnipotent status. He tells Alanna that they should have recruited Detective Chimp, the Riddler, Katanna and Professor Zoom in order to properly stop the house of secrets and the Breaker.

Back in the present, Alanna finishes her story to the other three members of the JLU as Sardath arrives in the room. Alanna then tells of the secret that she witnessed in the house which revolved around Sardath himself and the revelation that he is Alanna’s father. Sardath had setup Adam as a test subject for the Zeta Beams and purposely trapped him within. In a deus ex machina moment, Sardath reverses the beams and suddenly Adam Strange is returned to Rann safe and sound. The issue closes with Alanna and Adam embraces amidst the Justice League United.

Well as much fun as this series was intended to be, and that it was interesting that we learned how we learned Adam became trapped within the Zeta Beams…this issue was a real let down.

Overall this series had hoped to rally random heroes and villains and force them to work together to battle against a mysterious group of beings known as Breakers. In the end, we received an undersea adventure and a time travel amalgamation before the series was promptly cancelled. I will give a nod to Jeff Parker for ending the series by explaining how Adam became trapped and then reuniting him with his wife…but as with all cancellations, everything seemed abrupt and unplanned.

Unfortunately we got no real explanation on what the Breakers were or why they were targeting Earth. I was also hoping for more unique team ups that saw our heroes uniting with villains…even the one described by Adam in the book seemed interesting. But sadly, this is something that won’t come to pass.

In the end, we get a revelation about Sardath being Alanna Strange’s dad (who cares), and we somehow rescue Adam from the Zeta Beams by pushing a few buttons (too convenient). Overall this ending was a real let down and can be skipped all together…not to mention there isn’t a Batman related character in sight. Sad to say but I will not be missing this series.