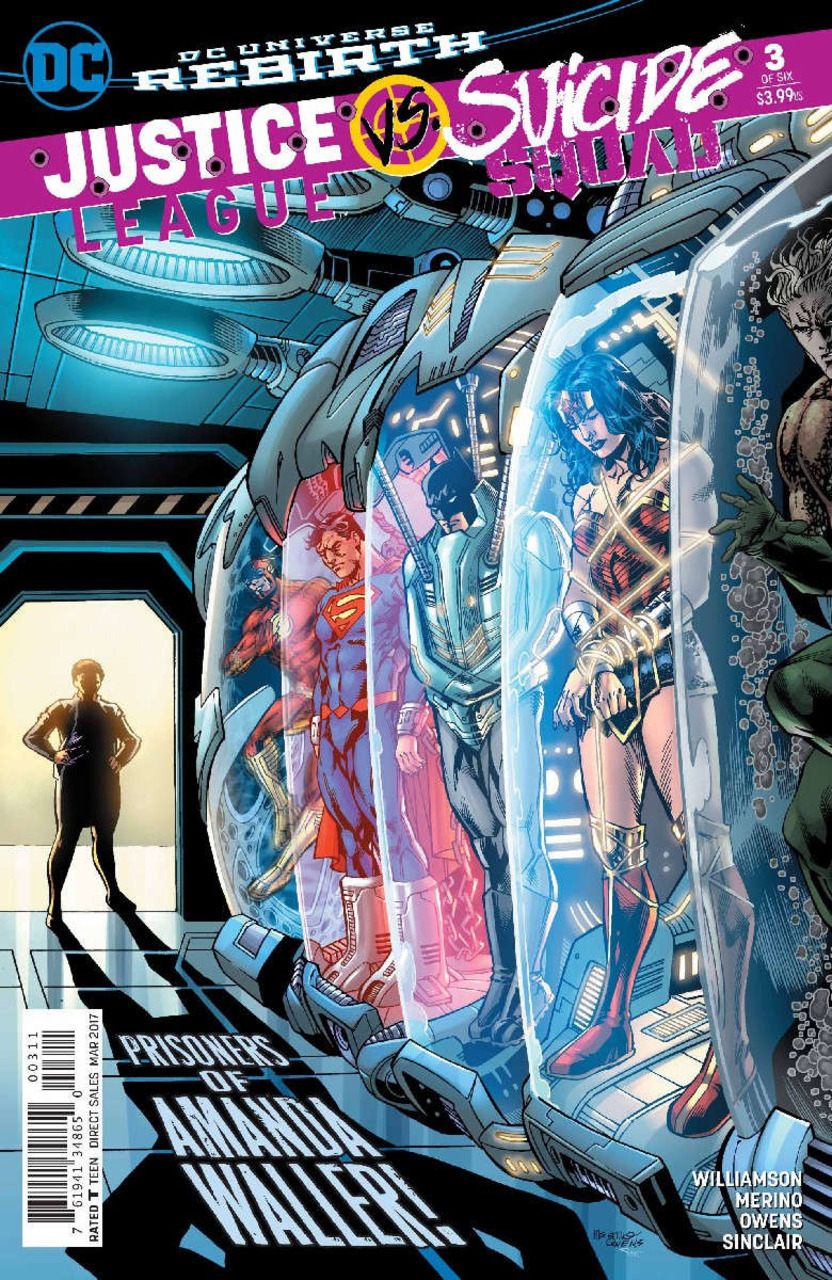 Chapter Three opens with Flag and Katana in the Catacombs. Neither have heard of this place and Katana can smell blood in the air. She sheaths her sword saying that the Soultaker will not be necessary. Flag shines a light on the dead bodies of the massacred guards. Flag and Katana are the only living souls in the Catacombs. The two surmise that the place used to be a prison, but with only a handful of cells. Katana guesses that this place was more about hiding the inmates than holding them. The two are here to retrieve the security black box and after retrieval they head back to Belle Reve. Waller may need help with her guests.

In Belle Reve, the guards are transporting a bound Batman on a dolly. Batman says that the strait jacket he is strapped in will not hold him. He quickly escapes the guards and goes off in hunt for Amanda Waller. Waller chides Batman for taking too long to escape. Batman demands that she release the League and Waller says that they are safe. Batman was being taken to the infirmary where Waller shows him the device she uses to inject the explosives into the brains of the Squad. She could have used it on the League but she did not as a sign of trust between the two teams. Batman knowing that Waller is in serious trouble demands that she give him the truth.

The Squad, unsure how they got to Belle Reve are ushered down a hall. Killer Frost says that she froze both the League and the Squad to stop Waller from blowing them up as she threatened. The Squad is ushered into the room holding the Justice League.

Superman asks where Batman is and Deadshot says that he is probably meeting with Amanda Waller about the fate of the free world. El Diablo mocks Cyborg and Harley tells Wonder Woman that she will write her every day. Boomerang meanwhile finds the Flash who goads him into touching the glass and is shocked for his effort. Flash could feel that there was an electromagnetic pulse in the glass that would give a non lethal shock.

Superman asks Frost why she hesitated touching him to drain his power. Frost recounts the first time she ever saw Superman in Metropolis and just seeing him flying overhead gave her the courage to stay in college. Frost is glad that Superman survived her draining his powers. Superman insists that the world can learn to trust the Squad. Deadshot retorts that the world does not care about them and the Squad is not a team.

We move to a story of an island in the South Pacific. It is protected by a group of shamans who will protect the island’s secrets to the death. We find that Lord’s team of Emerald Empress, Johnny Sorrow, Lobo and Rustam have taken out the shamans. Meanwhile Max Lord is with the high priest. The priest insists that “he” cannot be unleashed again. Lord says that the world is going to hell and someone has to stop it. We find that Doctor Polaris has impaled the Shaman’s arms and legs with swords as a form of torture and Lord is trying to manipulate his mind. Polaris and Lord exit saying that the high priest gave him what he wanted. Now it is time to go after Amanda Waller.

In Belle Reve, Batman and Waller arrive to the holding cells and the League is released. Batman says that there is something the Justice League and the Suicide Squad needs to see. They all gather with Rick Flagg and Katana for a briefing. Waller recounts the prison break from the catacombs and she shows the security footage of the inmates murdering the guards. In between shots, she gives a brief bio on Emerald Empress, Rustam, Doctor Polaris, Johnny Sorrow, and Lobo. All are efficient killing machines and they are the worst villains to ever step foot on any planet. She further says that the man who released and manipulated them is Maxwell Lord. Superman immediately recognizes Lord. Lord’s past is a mystery but he is able to manipulate people to do what he wants. Harley asks what is he after. Waller responds that he wants to kill her inciting the Suicide Squad to start laughing. Batman calls for order, Waller is not the only thing they are after. They are searching for a weapon that is being housed in Belle Reve. They are fully capable of invading Belle Reve to retrieve the weapon as a unified team. After all, they were the first Suicide Squad. Next issue Battleground Belle Reve.

This is the issue before the storm so to speak. The purpose here is an info dump and was devoid of any real action. We only see the aftermath of Lord’s team’s battle with the Shaman and that there is something or someone there that he wants. We do not get that reveal here but the big reveal at the end is that Lobo and company was the first Suicide Squad and they are headed for Belle Reve which is why Waller brought the League there.

We get some character development of Killer Frost who we have only recently met. She appears to have more of an admiration than fear of Superman. We get some comedy beats when the Squad mocks the incarcerated League, but I would like to know how she was able to hold them.

The issue was decent but its purpose here was more for exposition than action.