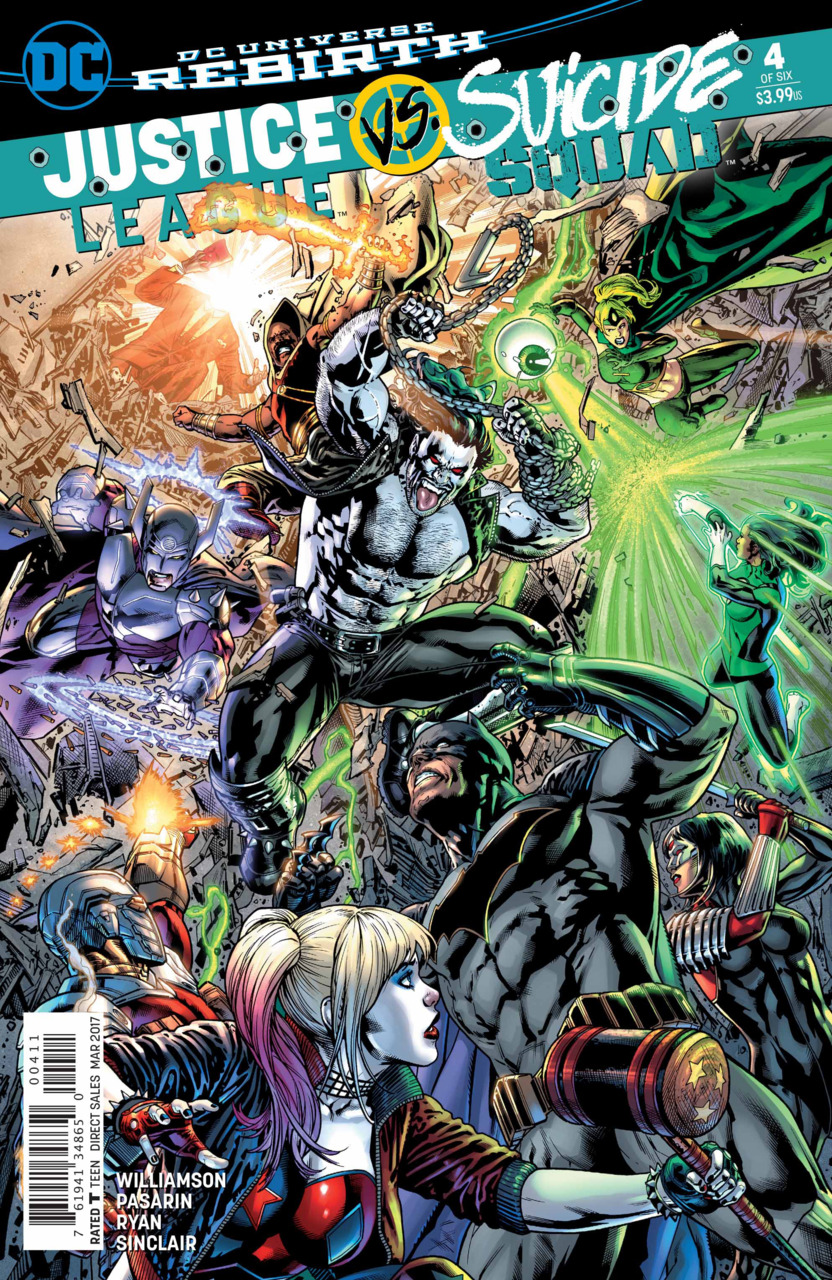 We’re past the build-up.  We’re past the initial squabbling.  The parties may still not like each other very much (or at all, actually), but they’ve agreed upon a common threat and the action is heating.  It’s time for Justice League vs. Suicide Squad #4, and the beginning of the end.  As Rebirth’s first quasi-large event begins the march towards its close, we pick up with the two teams on a temporary cease-fire as Waller’s original Suicide Squad bears down upon Belle Reve.

We don’t get a moment to catch our breath as the action picks right up, with the sides facing off while Maxwell Lord uses the chaos to make a grab for the as of yet unseen powerful object.  We don’t know what it is yet, but if Waller’s worried enough to involve the Justice League, everyone should probably be scared.  What follows is your basic fight issue.  The teams divide and chaos ensues.  At first, the OG Suicide Squad seems to have the brutal upper hand, but things eventually change.  Each grouping of characters gets a good amount of page time and the action doesn’t slow down.  Slowly, our heroes (and villains, I guess) take control of the fight and turn the tides.  The quality of the fights range from the great (Batman vs. Lobo) to the meh (everyone vs. Johnny Sorrow’s monster army).  I think unleashing the inter-dimensional monster army was a creative misstep, but it’s a minor gripe.  The interaction between all of the characters was enough for me, and the monster fights did little more than artificially raise the stakes.

I do have to say it is a little fortuitous the way the good guys eventually succeed against the odds.   The threat seemed significantly bigger leading up to this issue and it’s something of a let down to see it all end so quickly.  I’d have rather this battle been more back-and-forth, maybe spread across a pair of issues with more exposition between the scenes.  I’m not an advocate of stretching out stories, but I do make the occasional exception when I want more of something.  Also, it somewhat burns having the reveal of Lord’s object of desire effectively spoiled early on in the build up to this event through teaser images.  We knew Calypso would be part of the story in some manner, so when he wasn’t with Maxwell Lord’s team, it wasn’t much of a stretch to put everything together.

Fernando Pasarin and Matt Ryan (not that Matt Ryan) handle the art duties for this installment, and do a solid job.  This is a very large, very detailed issue but they keep everything clean and presentable, if not a little bland.  They could have easily found themselves bogged down by the scope of everything, but their approach saves the issue from being a quagmire.  Solid work on both the writing and artistic side of things keeps everything in order and makes for an enjoyable experience.  That’s really the best that can be said for an event of this caliber.  I’m looking forward to the next issue and what’s next to come in Rebirth.  I’m not even bummed that I’ll have to start picking up Supergirl to get my Legion of Super-Heroes fix.