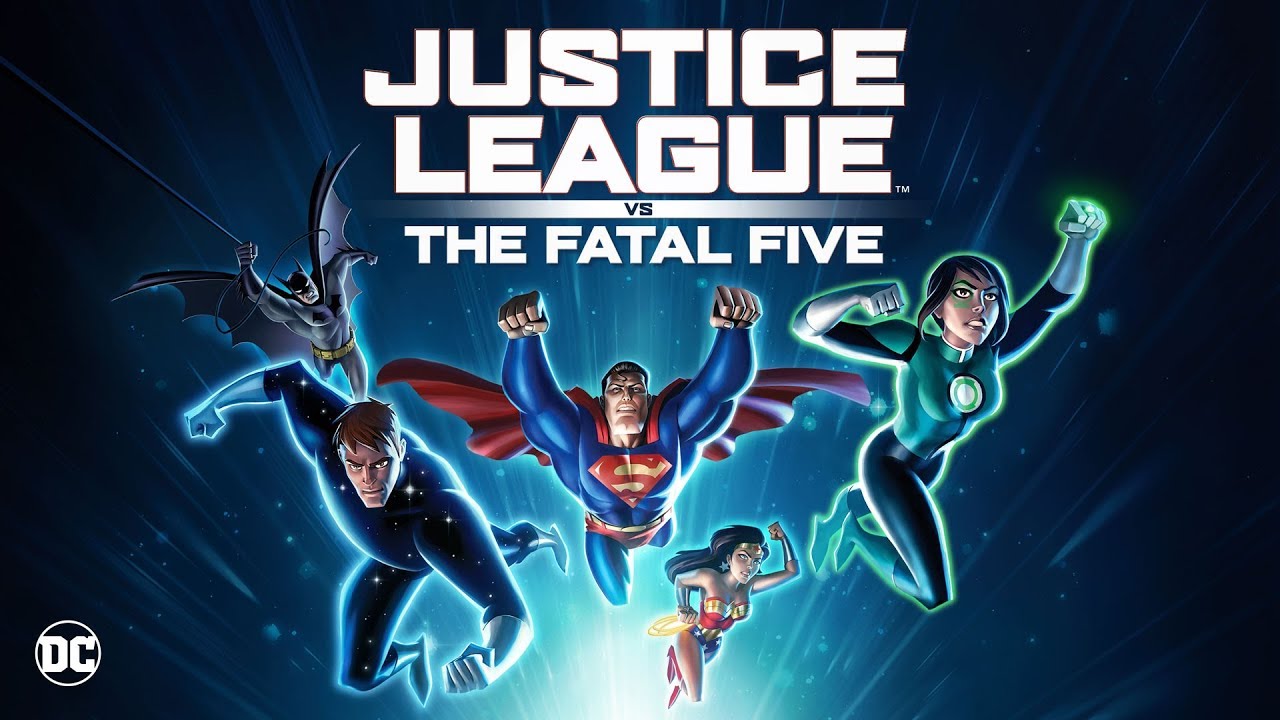 Synopsis (spoilers ahead): Legion of Superheroes member Star Boy travels back in time one thousand years to the twenty-first century to stop a group of villains, the Fatal Five, from freeing their leader, the Emerald Empress, but finds himself locked away in Arkham Asylum after he loses his supply of the medication that keeps his mental illness in check.

Meanwhile, new Justice League member and Green Lantern Jessica Cruz grapples with her traumatic past as she finds herself the target of the Fatal Five who believe her to be the key to releasing The Emerald Empress, who is locked up on the Green Lantern homeworld of Oa.

Analysis: Justice League vs the Fatal Five is something of a follow-up to the original Justice League Unlimited animated series and includes the big guns like Batman, Superman, and Wonder Woman, but keeps the focus on newer and lesser-known characters. While the big guns get plenty to do in the film, the focus of the film is on the newer characters, particularly Star Boy and Jessica Cruz, which I believe is very much keeping with the general tone of the original series, which was focused on the expanded roster of the Justice League and DC Universe.

The theme that runs though the story is characters that struggle with mental health. Star Boy has immense power, but is struggling under the weight of mental illness. Jessica Cruz is dealing with near-crippling PTSD following the brutal murder of her family.   The film even gives a quick few moments to check in with Two-Face at Arkham Asylum. I think that the film handles Jessica’s issues particularly well. I think this is a fascinating take on a superhero. A character that is dealing with trauma so profound that they have trouble getting out of bed every day, and yet they have been chosen to be a superhero. That’s an interesting idea and I think that the film does a great job of showing her struggle to rise above her issues. Star Boy’s mental illness is handled a little clunkier.   I appreciate the attempt to put real stakes on Star Boy’s increasingly tenuous grasp of his sanity, but I think that Star Boy was played a little too child-like and silly throughout the story and didn’t really feel like a genuine attempt to portray someone who is struggling with their grip on reality. I did appreciate the care put into the Two-Face cameo. While I prefer a Two-Face that is more motivated by rage then mental illness in interpretations like in Christopher Nolan’s The Dark Knight, I like that if the film was going to lean in to the more mentally ill version of the character, the filmmakers seemed to put much more thought into the highs and lows of what someone with a multiple personality disorder would be like then the quirk of just making up his mind with a coin.

While not the focus of the story, Batman gets a few fun moments throughout the story and I like the idea of pairing him with a brighter character like Miss Martian and the third act fight scene involving Batman referring to someone as “Skeletor”; which is frankly not surprising because there is really no reason to learn any of the villains’ names in this movie.

This brings us to where I think the film is a bit of a let down is in the choice of villains. The Fatal Five are a perfectly legitimate choice for villains, especially as the plot takes a lot of influence from the Legion of Superheroes. That being said, there really isn’t anything particularly interesting or memorable about this group of villains. I’m not someone with a deep knowledge of the Legion of Superheroes, and I found it difficult to keep names straight. Ultimately, I thought the Fatal Five were pretty unremarkable and forgettable. Considering the film has to spend time to establish Star Boy and Jessica Cruz, I can’t help but wonder if it would have been more effective to use a more established villain like the Legion of Doom or one of the other A-list villains, or to use an antagonist that is more of a force of nature that doesn’t require as much set up (like Starro or Doomsday).

The film does a fantastic job of capturing the look and feel of the Justice League Unlimited series. Series veterans George Newburn as Superman and Susan Eisenberg as Wonder Woman, not to mention Batman himself Kevin Conroy, slip back into their roll like a pair of well warn slippers.   I also appreciated little touches like the use of the musical cues from some of the original series music, such as the Superman animated series theme, that are sprinkled throughout that make this film feel like a natural extension of Justice League Unlimited.

I do however, feel that from a technical standpoint, the animation is something of a letdown. While the film does continue the Bruce Timm animation style, there was a rushed quality to the animation that I couldn’t help but notice. There are multiple scenes where you can feel the effort to get by with as limited animation as possible, filling the screen with static images saved for moving lips or other basic movements. There is also a choppier quality to the animation at points, as if the filmmakers cut down on the number of frames per second on certain scenes. Cutting corners like this gives the impression that this film was produced on the cheap, which is surprising because Warner Bros. Animation tends to set the bar fairly high.

Final Thoughts: While not without its flaws, this film was a fun return to the world and characters of the Justice League Unlimited and does an admirable job of keeping the spirit of the original series. Hopefully this will not be the last time we visit Bruce Timm’s corner of the DC Universe.

Editor’s Note: Justice League vs the Fatal Five is now available on Digital HD, Blu-ray and 4K. You can order your copy, and help support TBU in the process, by heading over to Amazon.