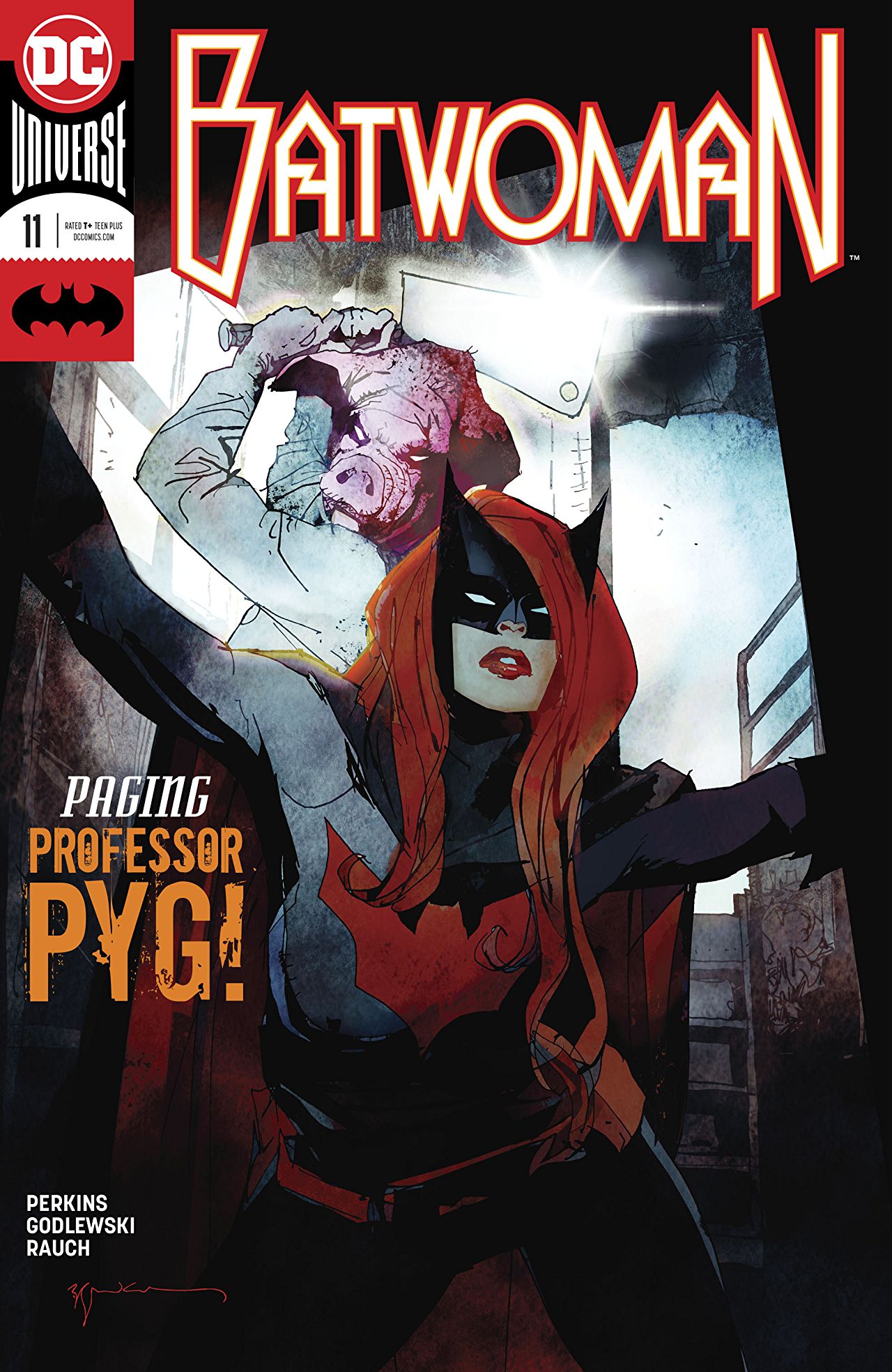 Overview: A little Pyggie took Julia, Kate beats the crap out of him and gets coffee (or maybe tea) afterwards.

Synopsis (spoilers ahead): Upon returning to the Sequoia after her last mission, Kate realizes that there was a struggle and Julia is missing. The only lead she has is an unknown piece of material.

By the Pyramids of Giza, two boys take photos and debate on whether they are able to pick up a girl at a bar. After being embarrassingly turned down, one of the guys enters an alley, and while using the bathroom, Professor Pyg’s dollotron’s (his weird minions) render the boy unconscious. They take him to Pyg’s lair, which is an old Stagg Industries boat.

While back on the Sequoia, Kate waits for the analysis of the unknown material to finish. She realizes that the object is a burned bone fragment with the DNA of the victim from the newspaper. She decides that her best course of action (since she has no leads on Julia) is to hit the streets.

Meanwhile, Julia is in a cage in Pyg’s lair watching him permanently bond one of his masks on a newly “created” dollotron. As Julia pleaded for this innocent’s life, Pyg turns to her stating that she will be the next volunteer.

As Kate searches the city for Julia, she berates herself for failing in her mission. She recalls the deaths of her mother and sister. She states that in her mission to help others as a person and vigilante, she has helped no one and is a failure.

Kate comes upon a few dollotrons protecting a hideout; she promptly defeats this group guarding the entrance. Just as Julia lays on the table with an approaching table saw right above her face (courtesy of Pyg), Kate comes in tossing the boat’s motor directly in the center of Pyg’s chest knocking him away from Julia. Pyg taunts Kate with the deaths of her mother and sister. She makes easy work of the dollotron’s and Professor Pyg; Julia is freed and the day is saved.

Instead of celebrating the win, Kate then wallows in the fact that her justice is not true justice; she is never there to help others, she is always too late to save the innocent. Wearing a pea coat and holding a coffee (maybe tea), she walks onto the streets of Brussels, where her mother and sister died, ready to confront her past and regain her edge.

Analysis: After the last arc where Kate faces the Scarecrow and his fear gas (with the accompanying hallucinations), you would think that she would have moved past her this “failing to be a hero” mindset. But, immediately after that cathartic mission, Kate enters this downward spiral of self-loathing again. It pains me to see her consistently default to this state.

Yet, this makes her entirely human. Often, we see heroes struggling after defeats or failures with Batman being THE expert on this (every major hero who interacts with him comments and/or jokes about his brooding personality). But, Bruce does not constantly get stuck in this downward spiral as Kate does.

After Nightwing, Kate is the only major member of the Bat-Family that will consistently be compared to Bruce. Bruce Wayne is almost the perfect human being; in theory, we, the average human, can be like him. In reality, the best we can be is Kate. We see her struggle. We see her fail. We see her staying stuck in this cycle.

I have often been stuck in this rut of self loathing and being stuck on my failures and inadequacies. It is extremely refreshing to see a hero struggle with normal human issues and be alongside her journey. With those who struggle with depression and being stuck in their failures, Kate Kane is an inspiration, for they know that they are not alone on this journey; every hero overcomes their struggles in times, this brings hope to those people who believe morning is never on the way.

Professor Pyg is by far one of the weirdest members of Batman’s rogues gallery; he brought back a slight bit of nostalgia. But, his main goal is to put masks on people. Weird guy. Plain and simple.

This issue had a new writer (stepping in for what appears to be only one month according to next month’s solicitations) and artist, who steps in for #11-12. Despite the change, I felt that there was absolutely no drop off from the previous arc.

Kate Perkins (Supergirl, Superwoman) did a fantastic job of giving Kate the same voice as before, specifically her inner monologue. Perkins wrote her internal struggle to perfection; as one who struggles with escaping the downward spirals of self loathing and focusing all of my thoughts on my failures, I appreciate reading a hero who struggles with the same things I do. Some may be fatigued with this overarching inner conflict and struggles, but I feel like her conflicts are relatable to many readers.

The art team, spear-headed by artist Scott Godlewski, did a fantastic job. Honestly, I have no complaints about the art, only praise. I specifically appreciate how the art team did the many action sequences in this issue, very crisp and precise.

Final Thoughts: It was a great individual issue with a little nostalgia (Professor Pyg), and the opportunity to be apart of a Kate’s journey from self-loathing failure to confidant hero. The first step in her journey is to confront the foundation of her downward spiral, Brussels.