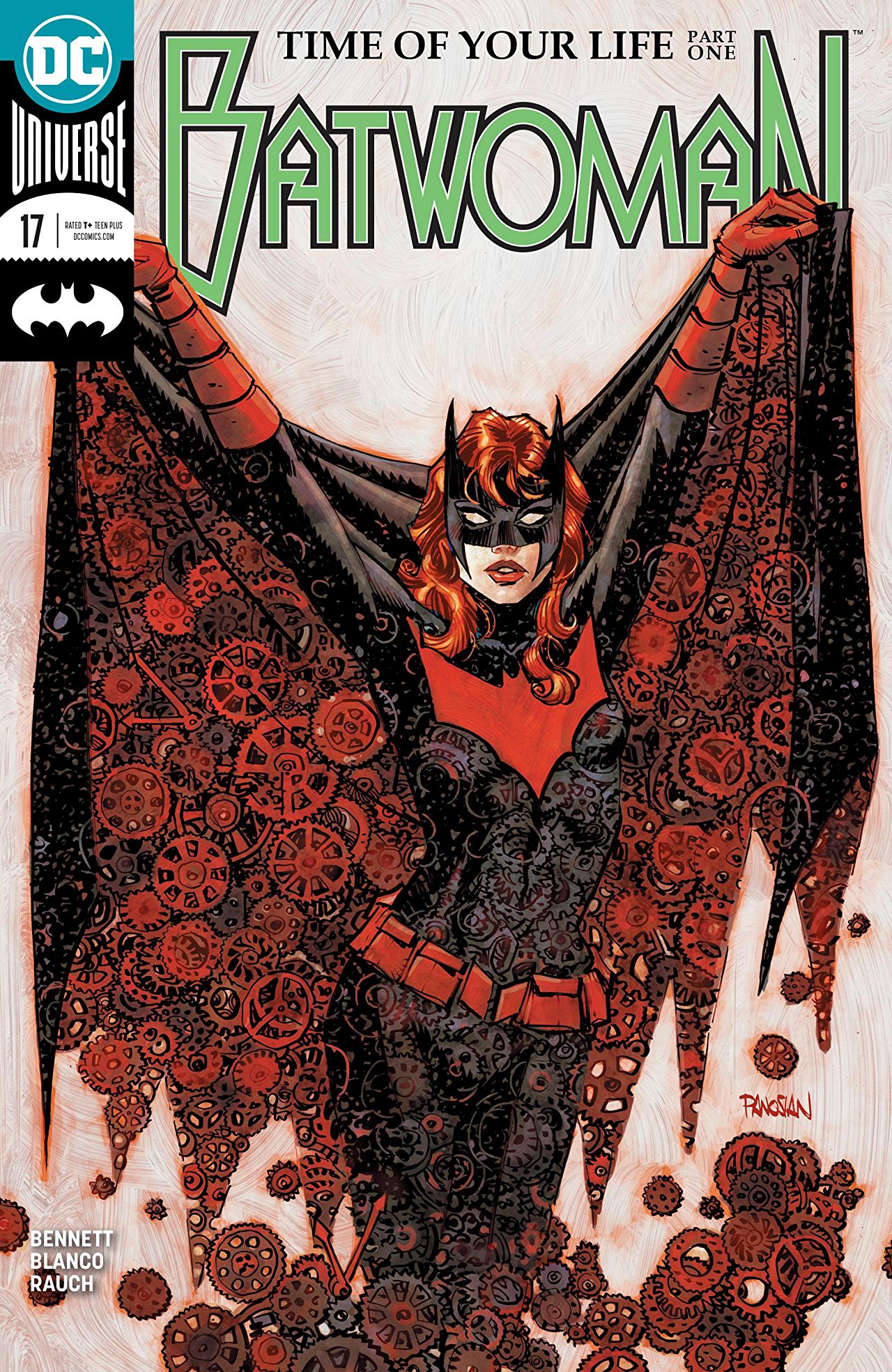 Synopsis (spoiler ahead): The story opens with Renee Montoya in an alley on a fire escape as a shadowy figure opens fire.  Montoya overpowers the figure, spilling a bottle full of pills as its revealed to be a clock-faced robot.

The story then moves to Kate Kane’s apartment where a series of panels sums up Kate’s year of traveling the globe and then cuts to Kate cooking breakfast for Julia Pennyworth and Kate’s sister Beth.  They talk about Beth’s alternate “Alice” persona and how busy they’ve become since returning to Gotham City when the conversation is cut short by a newscast that Gotham City Police Headquarters is under attack.

We then see Montoya ordering everyone out of the building as another clock-faced robot attacks.  Batwoman crashes through a window and attacks the robot.  Batwoman and Montoya work together to take down the robot.  Montoya then explains that the robots area new kind of drug dealer peddling a designer drug called “Kairos” which claims to give the user a sneak peek into the future.  Batwoman and Montoya agree to work together and Batwoman takes a gear from the robot to analyze.

Kate analyzes the gear and the story flashes back to the “Night of the Red Plague” three months ago with Kate going to visit Safiyah Sohail in custody.  Kate confronts Safiyah that Fatima is Safiyah’s daughter and then uncuffs Safiyah, freeing her.  Safiyah takes Kate’s hand asking Kate to go with her, and Kate walks away, stating that she doesn’t want to live in the past.

Back in the present, Batwoman traces the gear from the robot to matching an old pocket watch and to a masquerade at the Crystal Tower.  Kate and Renee go undercover dressed for the masquerade but find themselves surrounded by robots as the villain of this issue, the Clock King, reveals himself and orders his robots to kill Batwoman.

Analysis: This issue represents a new status quo and jumping on point for this title, with Kate Kane setting up shop back in Gotham after a year (since Batwoman # 1).  The story seems to tie up loose ends with Kate seeming to have exercised a lot of demons and put her past behind her and ready to set some roots down in Gotham City.  The book keeps the cast of supporting characters simple, keeping Julia Pennyworth and Beth around as Kate’s support team for her missions in Gotham and seems to be adding Renee Montoya back into the story as a potential love interest for Kate. It will be interesting to see if Renee sticks around in the title or if the creators realize that at some point they are going to have to have Kate and Renee cross paths and are getting it out of the way with.  I hope it’s the former. There’s a line of thinking that if you want to tell a good character-driven story that you can’t have a character in a healthy relationship (see Batman #50) and I think that it is much more interesting to have one of Gotham’s heroes balancing a personal life along with punching bad guys in the face.

As for the new status quo, I have to admit I like the more globe-trotting Batwoman as an international operative angle because it gave Batwoman a unique place in the Bat-Family as opposed to having her be yet another Gotham City vigilante.  I don’t have a problem with the new direction per say, I just feel its been done plenty of times before with other characters.

As for this storyline, I can’t say I was terribly surprised that Clock King turned out to be the villain…  I mean … clock robots… who else is that going to be…  Flavor Flav?  That being said, there’s a Batman: The Animated Series style straightforwardness quality to this issue that I appreciated.

The art in this issue by Fernando Blanco is a perfect match for the story and keeps the more fantastical elements such as the clock robots feeling grounded and not jarringly out of place like you’d assume they might seem.  There’s a Batman: Year One feel to the art that I appreciated.

Final Thoughts: While I miss the globe-trotting take on the character, this is a solid issue.  I’ll be sure to see where the next issue is going.  You should too.