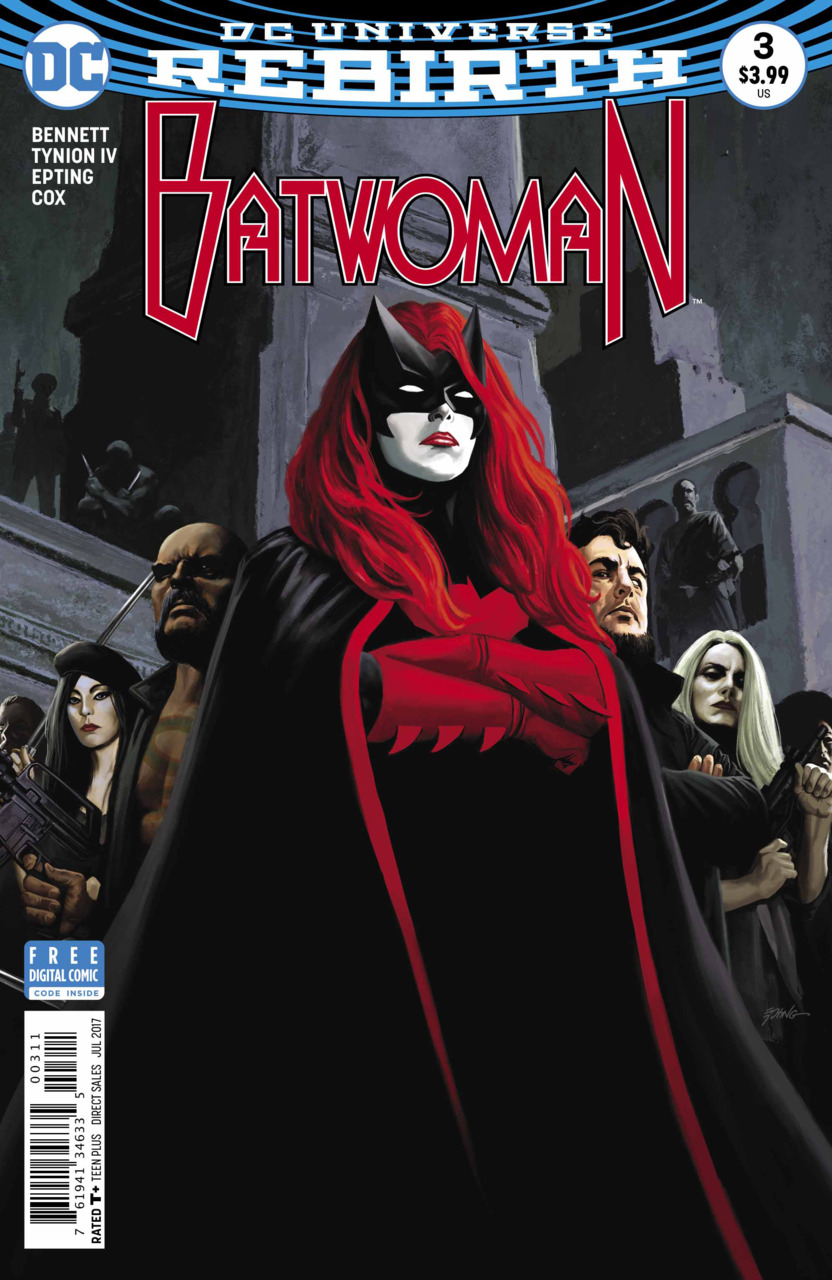 In Brief: Batwoman investigates the Kali Corporation and finds out what they have planned for Coryana.

Summary (spoilers ahead): The issue starts with a brief sequence showing us how Tahani (Knife) and Safiyah met. Back in the present, Kate is in the Kali Corporation branch in Coryana to meet the twins who run it. The passport she uses as identification is rigged to enter a hacking code into the corporation’s computer system when scanned so that Julia can have access to it.

As Kate enters the twins’ office she plants a device onto their table. Their aliases are revealed, the man being called Elder and the woman Younger. While they explain their relationship to Kate, Julia is marking her points on a “Creepy Twin Bingo” she has made herself.

To get the siblings’ attention, Kate brings forward her interest in buying the Desert Rose, Safiyah’s bar. The twins talk about it as if the previous owner were the “ceremonial leader” of Coryana. They are trying to establish themselves as the new leaders of the island, calling it a wild garden that needs maintenance. They also claim to have acquired the bar through Safiyah’s heir, whom Kate was unaware existed.

Meanwhile, Julia manages to break into the corporation system and finds out that they are planning on exploding Coryana. As she tries to communicate this information to Kate, Knife breaks into the meeting and rips Kate’s device off of the table. Knife helps the siblings get to a helicopter to flee as she confronts Kate, now fully dressed as Batwoman. Kate flees the scene, drones attaching to her to build a glider midair.

Kate informs Julia that Kali is a front for The Many Arms of Death, and Julia in return informs her that they have bombing sites spread throughout the island. Kate finds one of them, Knife hot on her tracks. Just as she strikes, Batwoman calls in the warlords of Safiyah to help her.

In Depth: This issue doesn’t move the plot forward all that much. Its two main purposes were clarifying that the Kali Corporation is indeed a front for The Many Arms of Death and showing what their intentions are with Coryana. Despite that, this is by no means a slow issue, its pace working very well, even better than the previous one.

Another change in storytelling was that Coryana was not as prominent in this issue as it was in the previous ones, in which the island was almost a character in itself. This change will probably not last long since in the next issue Batwoman will probably have to go on a hunt to find and disarm the explosives, which are all hidden in smuggler’s caves.

One of the greatest aspects of this arc is that it is being told and acknowledged as a “children adventure book.” There are pirates, hired killers, smugglers, all gathered together on an isolated island that is being investigated by a super spy. I hope we get to see more of those peculiar characters as the story unfolds, otherwise they will be a wasted potential.

In the art department, Epting seems to be getting better at illustrating action scenes. The characters movements are now looking much more fluid and real compared to his first issue on Batwoman, and her fight with Knife shows this improvement. The 9-panel layout for the flashback opening sequence has become a recurring theme, and it has been working greatly to keep a consistent narrative going. Special in this issue was the contrast built into this sequence, with a very tense text opposed to a very calm scene of Tahani (Knife) eating some exotic fruit. Also, Epting excels at conveying how borderline annoying the twins are. From the Elder’s plastic face to the Younger’s dimples, from their constant smiles to the symmetry of their movements. Everything about them is just discreetly telling us that they are wolves in sheep skins.

Overall: This issue is one step away from being filler, but it gets some threads on the right path for the conclusion coming in the next issue.