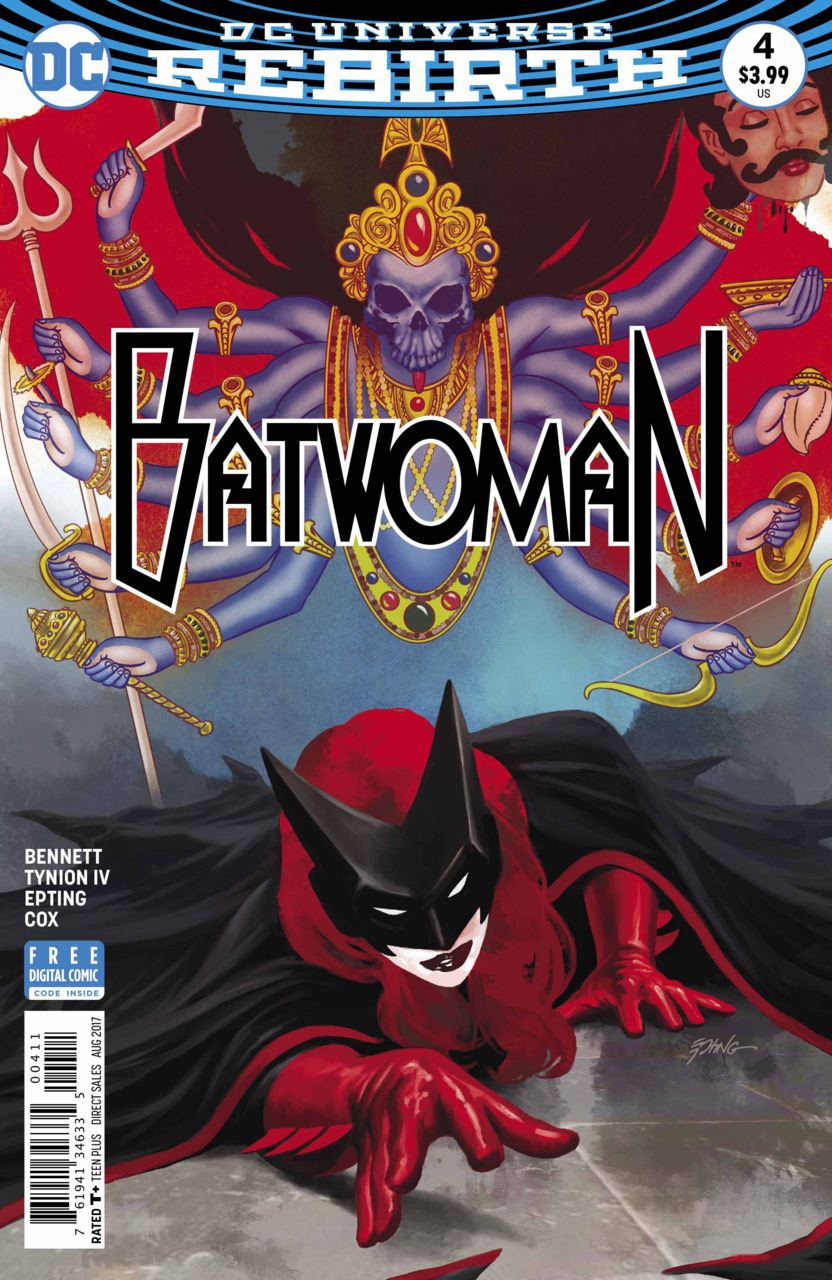 In Brief: The final issue of The Many Arms of Death. Kate and faces Tahani and together with the Warlords try to avoid the destruction of Coryanna.

Summary (spoilers): The twins flee the island as the explosives are about to be detonated. Meanwhile, Batwoman is still in the Smugglers’ Coves of Coryanna fighting Tahani. She gives Adelaide an E.M.P. device that cuts off network connections, making it impossible for the detonators to work but also cutting off Kate’s comm link.

The fight between Tahani and Kate lead them to the entrance of the cave. Kate sets fire to the gasoline covering the water, cornering Tahani on a boat. She escapes, declaring that “The Many Arms of Death are still out there.”

To celebrate their victory, the Warlords, Kate and Julia gather in the Desert Rose, Safiyah’s bar. Tae-Ree reveals to Kate that she has inherited the Desert Rose but she refuses to take it. She returns to the boat she and Julia are using as base of operations and tells Julia that she is back to stay, that she won’t be running after Safiyah. After she leaves, Julia sends a report on Batwoman’ actions during the mission to someone, presumably Batman, but it might as well be the Colony.

The issue ends with the twins meeting with their queen, the head of The Many Arms of Death.

In Depth: The plot development of this took a lot of turns. In the beginning, we had Batwoman investigating the Monster Venom market, which led to her investigation of The Many Arms of Death, which led to her returning to Coryanna and finding out that the island is going to be blown up. We end this arc with only one of the three storylines coming to a conclusion with Kate successfully avoiding the destruction of the island. While this may seem like Tynion and Bennett have digressed from the original problem what it actually does is leaving unresolved problems to be picked up in the future, guaranteeing that the arcs to follow will be somehow connected to this one, a strategy also being used by Tynion in Detective Comics. It works, it works splendidly, and this way of plotting is sorely needed in some of DC’s other titles.

On the specifics of this issue, the most intriguing aspects were not the fight sequences – and besides, I find Steve Epting’s art quite stiff in those. There is also a little nitpick of mine regarding the impossibility of pulling this move on Kate since she wears a wig. The first thing that caught my attention was the veiled criticism to gentrification. Officially, gentrification means “the upgrading of run-down urban neighborhoods by affluent people who buy and renovate the properties, thereby displacing the resident poor.” (Random House Kernerman Webster’s College Dictionary). In a broader understanding, it is basically what happens to anything that was specific to a culture and becomes hip and trendy: exotic tourism taking over small villages, industrial lofts being sold at crazy prices, food trucks becoming expensive, to name a few examples. The authors are making their point when Tahani declares that the “the conquerors of the world” take what is sacred, what is local and colonize, brand and sell it. Another interesting little detail was the very strong evidence that the Queen of The Many Arms of Death might be Safiyah. The final panel shows a woman sitting on a chair among rose bushes, two foxes by her side, holding a rose. This imagery has been associated with Safiyah since issue #1. Also, the twins say that Batwoman has found what the queen left for her to find. In the middle of the fight sequence with Tahani, Kate finds a rose on the floor and remembers Safiyah. We can surely expect the return of The Many Arms of Death in the future.

As a little extra, I’d like to refer to something that has been hiding in plain sight. The Kali Corporation is the front for The Many Arms of Death and, by now, this has been made clear. Kali is not a random name, it is the name of a Hindu goddess who is often associated with wrath and war. In some versions, she is said to be a result of the merging between Parvati and Shiva. The cover of this issue makes a direct allusion to Mahakali, one of the shapes taken by Kali.

Overall: The arc wraps up nicely, solving the most immediate danger at hand and leaving open interesting plot lines to be explored in the future.