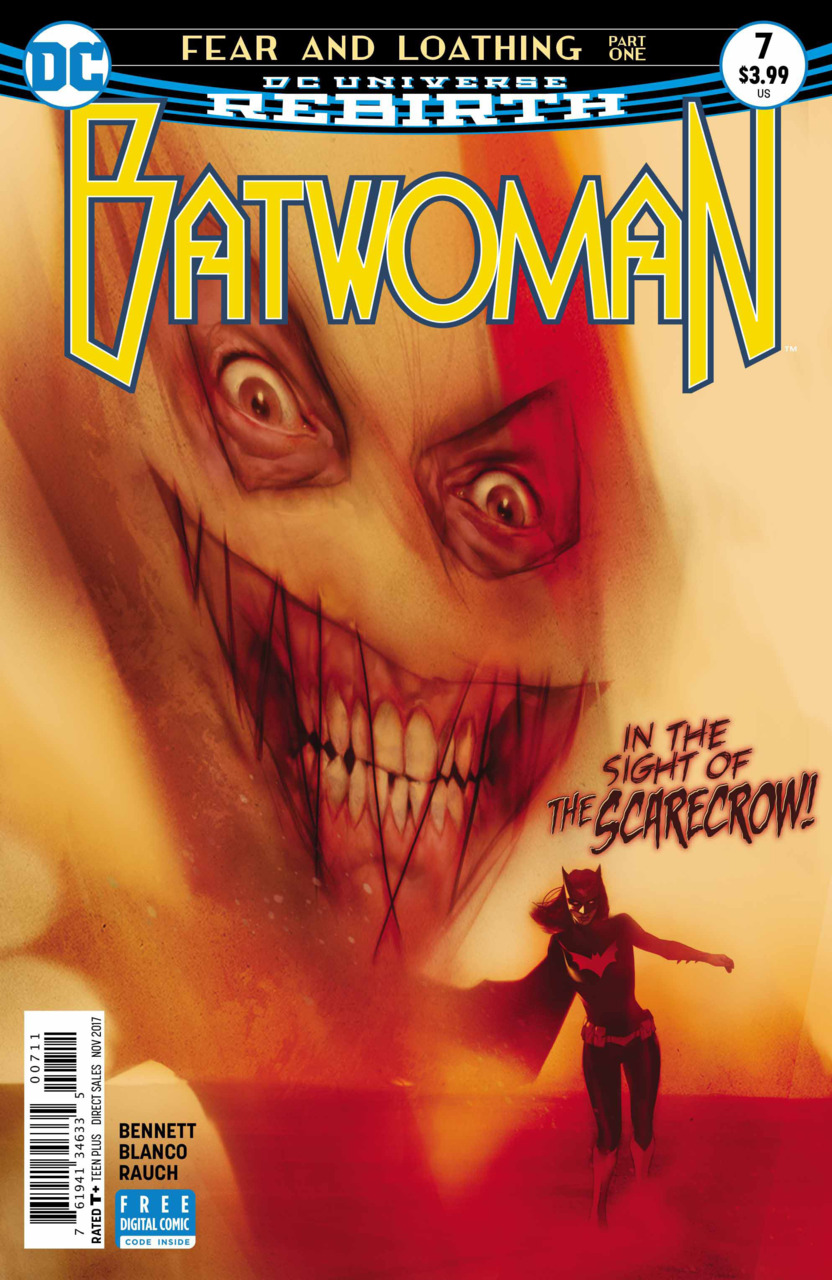 Overview: Batwoman continues her search for the Many Arms of Death only to come face to face with Dr. Jonathan Crane, the Scarecrow.

Synopsis (spoilers ahead): We open in the Sahara Desert. A seemingly delirious Batwoman in a tattered uniform is calling Safiyah’s name. We find that 18 hours earlier, she was in a plane over the Sahara continuing her search for the bioterrorists known as the Many Arms of Death. This group is selling the Monster Venom that caused the Monster-town in Gotham earlier. Kate backtracks to her fights with The Knife on the island of Coryana, The Rifle in Tehran, The Chain outside of Tokyo, and the Torch in Mississippi. She is over the Sahara now hunting The Needle. A village in Mali was attacked by a biological weapon and the origin of the attack was traced to the Kali Corporation, that sold half of the terrorist organizations in the world its guns, germs and steel. This is also the path pointing to The Needle. Julia is docked hundreds of miles away. That and the size of the Sahara, Kate knows that she is alone. Her plane is hit by surface to air missiles and shot out of the sky. It crashes into the sands below.

We shift to a flashback on Coryana during the “Lost Year”. Kate is with Safiyah in bed and the two are interrupted by Rafael. He reports that Maoism, one of the island mercenaries, is asking to see Safiyah and he is upset. He has fears that his daughter aims to kill him and take his place as one of the Warlords of Coryana. Safiyah responds and Kate sees a bloody fox in the garden.

Back in the present, Batwoman is injured and outside of the plane on her feet. She is trying to determine the source of the missiles that brought her down when she sees shapes approaching her. She identifies them as Colony Soldiers, but they are actually monsters. Kate engages them and hears a transmission during the fight. She discovers that the transmission is from her father and he is trying to find her location and asking what happened to “this squadron”. Jacob tries to warn Kate not to go near but his transmission is interrupted by an approaching sandstorm. Kate is taken into the air by the storm and is promptly smashed back into the sand.

In another flashback, this time six months ago in Switzerland. Kate is with Beth. She is awoken by Beth who asks her if she wants to hear Beth’s dream. We find that Beth is in the Weibe Kaninchen Sanatorium outside of Geneva. Beth insists that she is safe here and they even let her garden in the spring. This awakens a memory for Kate of the fox in the garden. Her “ex” which I surmise is Safiyah used to keep foxes in the garden. The foxes were cut by thorns and started an infection. Safiyah then had to hunt all the foxes and kill them to stop the infection from spreading further. Kate continues to ask Beth if she is safe, healthy and happy. We see a panel that shows Beth with a wound on her forehead saying that she knows Kate will not shoot her like the foxes.

Kate wakes up in the Sahara again. Kane checks the pulse of the soldiers that attacked her, but she finds none. She wonders what happened to Jacob Kane’s soldiers here. She is able to salvage a transmitter from one of the soldier’s helmets and continues on foot. Hours pass and she is slowly getting sun poisoning. She steps into water. Kate quickly jumps in and drinks from the water. She realizes that she has no means to sterilize the water, but if she does not drink she will definitely die. She drinks and then finds that she is drugged. Vines grab her and dunks her under the water. She is in the presence of the Scarecrow.

Analysis: I do not understand the placement of this story. I thought we were starting an arc set in the near future with Batwoman facing off with a new Batman, Tim Drake. Instead we sink back to the original arc of this series. Despite that jolt I will talk about this story alone.

This story really centers around Kate only. She is alone except when we get the two flashbacks. The first with Safiyah and the second with her sister, Beth. The two flashbacks are related to the foxes. That symbolism is lost on me. I am not sure what I am supposed to get out of the foxes getting an infection and then having to be put down and how is that connected to Beth. My only guess is that Kate is focusing on Beth’s mental illness and she may have a fear that Beth if not cured will have to be killed. I could be reaching on this.

I do like the character of the Scarecrow and it would have been a great surprise to see that Scarecrow could be behind this story in the Sahara except for the cover giving away the Scarecrow’s presence in this story. It is interesting with covers these days, they either have nothing to do with the story on the inside or they give the story away too soon.

I like the style of the art here. I get the felling of the Sahara being gritty which is fitting with all the sand and the use of the sandstorm in the story. My absolute favorite panel is the the second to last page. It is the the drug nightmare panel. The center piece being the rose which does connect to the gardens in the flashback and we get images of Kate with “The Needle”, foxes, frogs and being forced into the water. I liked the use of the purplish reds which takes the reader away from the realistic feel of the rest of the book. It is clear that we are looking through the eyes of a drugged Kate Kane.

Final Thoughts: Overall this issue is good, but jarring and hard to follow after the last issue. I am also left with a question. Is The Needle Scarecrow or is The Needle someone else that is away so Scarecrow can play? I guess I will have to wait for next month.