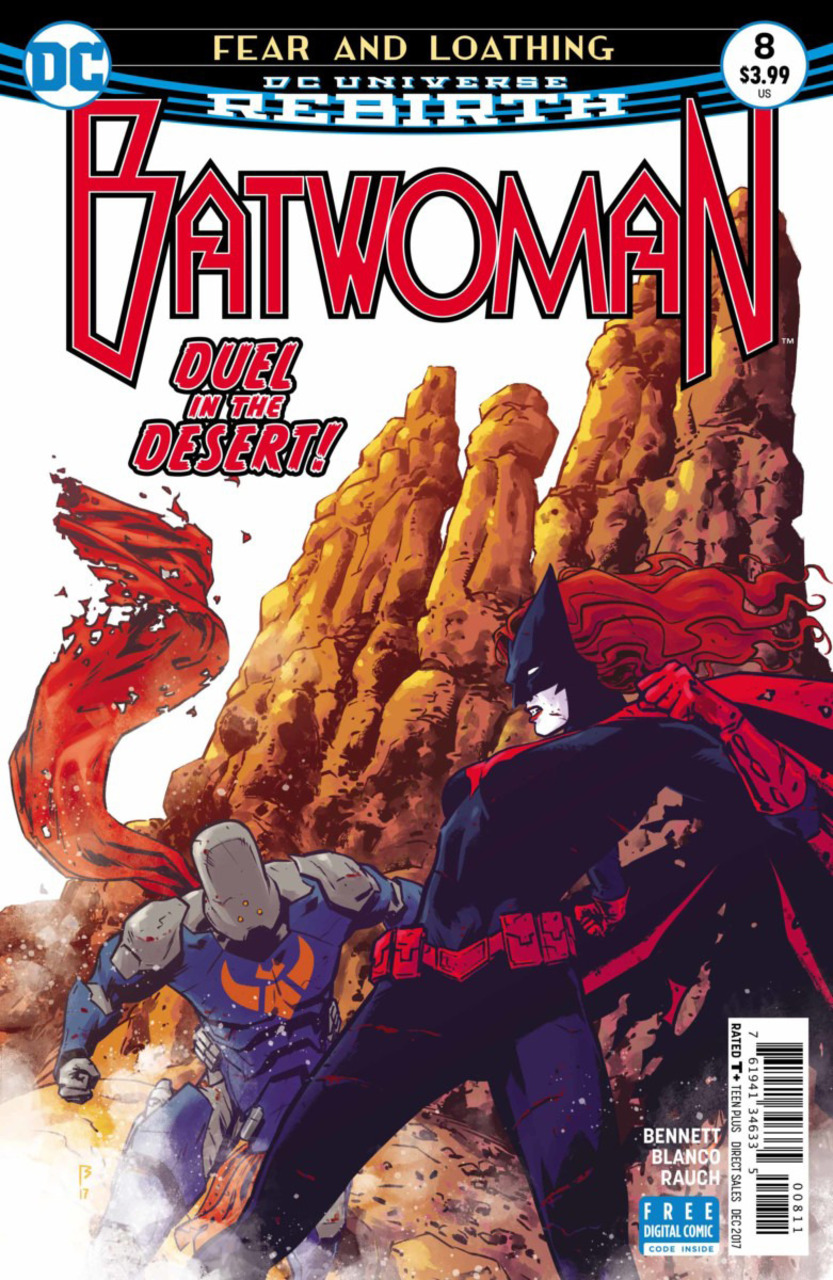 Overview: Batwoman joins forces with Colony Prime to escape the Scarecrow. He has other ideas.

Synopsis (spoilers ahead): Batwoman is still in her drug induced stupor. She is constantly repeating “I promise to kill them all to survive.” We learn that Crane is holding her in a cell and monitoring her condition from his lab. He injected her with more of his fear toxin and we learn from his assistant, Fatima that there is another prisoner too. The Many Arms of Death have been funding Crane’s research and he is holding an antidote to his fears toxin in case they use it on him, he does not want to end up like Perillos. Crane describe Perillos as the inventor of the burning bull torture device only to find himself as the first victim. Fatima changes the topic asking Crane what Batwoman is dreaming of.

We find out what Kate is dreaming of. She is on Coryana on horseback with Safiyah. They are investigating the sudden death of some of the foxes. A Safiyah with a skull for a face hands Kate a rifle telling her to kill them all. Back to a more realistic dream, Safiyah is investigating one of the bodies. They surmise that the disease may have been brought to the island by rats so she orders for rat catchers and poisons, but in the mean time she begins to put the foxes down herself.

The dream becomes weird again as we find Batwoman on a skeletal horse jumping from tangled roses. She finds herself in Brussels and finds Beth and her parents. She embraces them but creatures that represent each character comes out of the roses and grabs Kate’s family. Saying kill them all. A man in black grabs Jacob. A giant black widow spider with a bag over its head dripping with blood from a hole in the center grabs Kate’s mom, and a woman wearing a rabbit mask grabs Beth. Batwoman grabs Beths arm and kicks the head off of the woman. We hear a voice over saying Kate killed them all including herself. She turned into a giant bat and Kate sees a giant bat appear. The bat attacks Batwoman and she grabs the woman’s head and hurls it at the man holding Jacob. He recovers and picks up his rifle and aims at Batwoman who eludes the blast and grabs the rifle herself and shoots the spider freeing her mother. Then she hurls the man into the spider. Batwoman picks up a leg from the dead spider and jumps to stab the bat in the head. She looks up and finds Jacob telling her to sober up saying that he thought she was done drinking and delusions . All three become covered with rose petals and everything goes dark.

Kate wakes up in her cell next to a cell holing Colony Prime. He asks her who is Safiyah and she refuses to answer. Kate only wants to know where is Jacob Kane and hammers on the plexiglass wall separating them. She surmises that the tracker she took last issue was leading her to Colony Prime and Prime responds that the woman Fatima took his helmet from him. Kate touches the symbol on her chest and it starts to glow. The two take more jabs at one another and Scarecrow interrupts over a communication screen. He releases gas into the cells saying that the Many Arms of Death are honored by their sacrifice. Batwoman interrupts saying that she notices that she is still wearing her cowl. She surmises that he tried was was met with an electric shock so he dumped her in a cell despite her dehydration, sun poisoning and dislocated ribs. Kate says that she was exposed to radiation from the sun and with the electromagnetic panels Julia installed in her suit, as Colony One places a rag in one of the gas nozzles, she presses her symbol again causing an electric jolt that breaks open the door and smashes the barrier between the two prisoners. The two escape only to be hit by a scull grenade that puts them both in a nightmare hellscape. Colony Prime sees a video game and Kate sees the hellscape full of rose petals, bats and skeleton horses. They both realize what they are seeing is not real. Both see a giant Scarecrow over them with his syringes coming out of his fingers. Next issue Batwoman’s nightmares come to life.

Analysis: We learn that all the events from last issue were perpetrated by Scarecrow and he is using Batwoman in some kind of experiment. We get the same dreams we saw last issue but we do get a cliffhanger that promises on some action which we did not really see this issue. The only action was in the dream sequence which left me with a question. Why was Kate’s mom represented as a black widow. The only thing I can remember is that she was killed in a car crash, I do not knowt what the black widow represents.

The art is gritty, which I do like. My favorite part of this issue as in the last is the art. The dream scenes look like dreams and the reality scenes are gritty and grimy with a dull color pallet which really brings the reader into there story. The main issue I have is with the coloring. Kate’s red gloves become black with red gauntlets during the dream scene and I can only surmise that that was a coloring mistake. Despite this, the art is still the best part for me.

Final Thoughts: It is interesting that the Colony and Batwoman are both hunting the Many Arms of Death, it makes it somewhat plausible that she will head up the organization in the future.