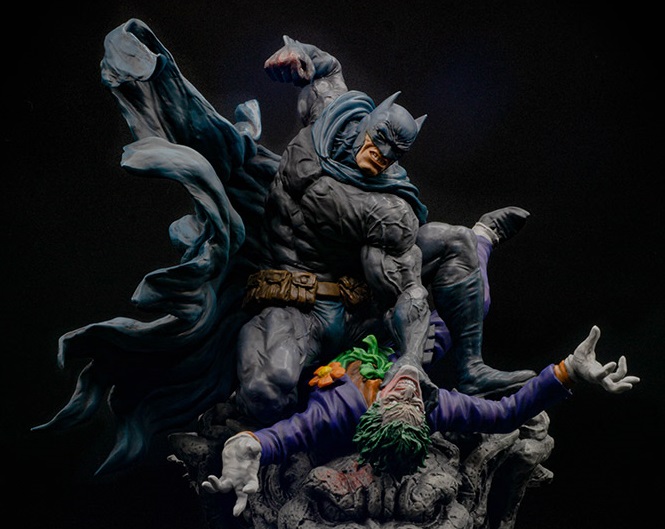 Koto Inc and Zerostar Studios have released details for their latest master series statue, which features Batman versus Joker fighting by sculptor Keiji Iwakura. The statue measures about twelve inches tall and features a dramatic gargoyle base on which the two are fighting. It is priced at $350 and is expected to ship between January and March 2022. You can preorder the statue at either Entertainment Earth or Sideshow Collectibles.

Justice and chaos clash swords in this amazing first release by Koto Inc. and Zerostar Studios.

Angered by the Joker’s crimes, the caped crusader pursues him in his unrelenting fury. Here, he grasps his nemesis by the throat, his fist raised and ready to strike out the evil from Gotham City once and for all.

Symbolizing his chaotic and often nonsensical nature, the Joker breaks out in unrestrained laughter. Beneath him, a massive gargoyle carved in stone comes to life through the sculptor’s gritty portrayal of the scene. Every minor detail is perfectly etched in veteran sculptor Keiji Iwakura’s work. This remarkable statue is made of polystone. Order yours now while supplies last! The DC world can anticipate many more iconic characters and stunning scenes in future releases by Koto Inc. and Zerostar.