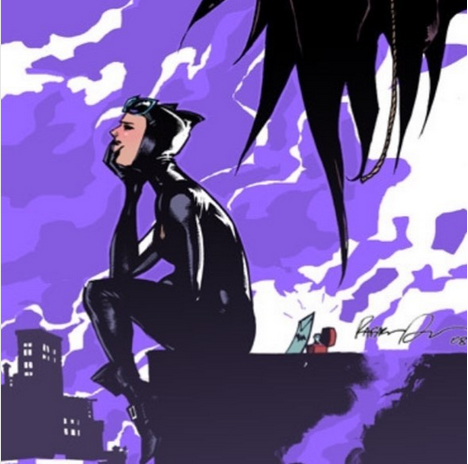 Batman is gone, long live the Batman. It is time to say farewell to Mr. Adam West, the Batman from the ’66 television series, who left the land of the living this weekend making all of the Batcave – and the Watchtower too – mourn the loss of he who was the Batman of many people’s childhoods. The companies involved with Bat-media and DC Comics have paid homage to Mr. West, such as WB GAMES with an LEGO-like image of Batman and Robin with the Batmobile and LEGO themselves. The list of people who in some way have come forward to express their love, gratitude and respect for him goes on forever, including Batcave members such as PAUL DINI, GREG CAPULLO, TOM KING, PETER TOMASI, SEAN GORDON MURPHY, DAN JURGENS, SCOTT LOBDELL, SCOTT SNYDER, CHUCK DIXON, MITCH GERADS, TIM SEELEY, JOCK, MARK MILLAR, JIM LEE, JH WILLIAMS III. Some of our artists have gone a bit further and made special pieces, names like RAFAEL ALBUQUERQUE with a very colorful piece, JOHN TIMMS’ Batman overlooking Gotham, FRANCESCO FRANCAVILLA with a throwback to the classic bomb scene, and BILL SIENKIEWICZ, who has made a beautiful watercolor portrait with Batman and West dissolving into each other. Some homages though deserve a spotlight. Firstly, DUSTIN NGUYEN brings back a scene from the ’66 series of Bruce Wayne talking to Batman on the telephone. PATRICK GLEASON, who gives Adam a spot on his “Mount Bat-more” together with Conroy, Keaton, and Affleck. And, finally, KEVIN CONROY himself, the voice and soul of Bruce Wayne in Batman: The Animated Series, whose homage moved me the most. “Goodbye, my friend” is the caption that came together with an image from the episode The Gray Ghost, in which Bruce Wayne meets his childhood hero, voiced by Adam West. As one Batman dies and others still live, we can all recall NEIL GAIMAN’s classic Whatever Happened to the Caped Crusader. The author, who spent a brief but notable time down in the Batcave, also paid his homages to Adam, recalling his Secret Origins issue, a “love letter to Adam West, Frank Gorshin and my childhood“.

Moving from a funeral to a (potential) wedding, this week we saw Bruce proposing to Selina and the internet exploded a little bit. It got so big that Jimmy Fallon made a joke about it on live television. The buzz and fuss traveled to the realms of other titles, reaching Super Sons’ artist JORGE JIMENEZ who made a doodle with Damian asking Catwoman whether she is now his “new mommy”, and All Star, with RAFAEL ALBUQUERQUE sharing an old piece of his take on the Bat-Cat proposal. A little more sneaky, a little more faithful to the character, I would say. Besides all that, The War of Jokes and Riddles lurks on the horizon. This week, TOM KING has further clarified the time frame of it, “A year after the bat crashing through the window.” This is a reference to Frank Miller’s Year One, meaning they are bringing it back to continuity after the New 52 made it impossible to fit in the timeline. Also, continuing with the Catwoman theme, we get MIKEL JANIN’s take on old-school Selina for The War of Jokes and Riddles.

JAMES TYNION has once again made a surprise Q&A session. Some of the questions that have arisen were about Cassandra Cain, such as what he would love to do with the character, to what he answered that he would like to re-establish her relationship with Barbara (and Julie Benson, writer for Birds of Prey, is raising to the opportunity), and also regarding the change in her name from the previous Black Bat to Orphan, Tynion says that Cass deserved her own legacy. In regards to his take on Bruce and Tim, Tynion says that his Batman is heavily influenced by The Animated Series and his Tim by both Chuck Dixon’s Robin and Geoff Johns’ Teen Titans. Also on Tim, I’m not sure if his answer when asked about Red Robin’s “showgirl wings” is a joke or not, but he said that Tim will be having “actual literal bird wings” when he comes back.

I’ve finally had confirmation that I have been misplacing every single SEAN MURPHY related thing since the begining of the ‘Cave, as he is yet to begin working on the art for All Star. So, from now on, I guess we’re gonna have a new session called…

And this week we’ve only had one piece by him, with the Bat breaking into Harley’s kitchen as she makes herself some coffee. The first installment of the 8-issue-saga, The Forge, is due to come out this Wednesday and JAMES TYNION couldn’t be more excited, especially considering a few splash pages in The Forge that are “stand up and cheer” material.

And as the first installment is coming out, GREG CAPULLO continues his work on the issues to follow. He’s had a tough weekend with his personal life and seems to be using dear old Alfred to express his sadness. The expression on his face is so powerfully melancholic that it breaks my heart. I’m here urging you my fellow bats to go show Greg some support, everyone needs it from time to time. From earlier in the week we got a Justice League meeting scene and some Superman. It seems that drawing the big blue guy has made him even consider working on a Superman book.

TYLER KIRKHAM has started sharing some bits and pieces of his art for the upcoming Annual but he seems to be more excited about drawing Nightwing than The Outlaws. I don’t blame him at all, but I guess anyone who follows the ‘Batcave already guessed where my allegiances lie. Behold Kirkham’s Nightwing. This week’s honors features only one artist whom I would like to introduce to you all. KEVIN WADA is technically not part of the Batcave, he is a freelance cover artist who is currently working majorly for Marvel. He got slingshot into the spotlight with his fanart showing comic book characters dressed in high fashion – something he continues doing, and you can find some Batman Universe characters such as classy Selina and masquerade Batwoman which made me drool. He has also worked on some variant covers for DC, including Catwoman #41 and Catwoman #46. He is AMAZING with watercolors (you say watercolor and I’m in, see my love for Dustin Nguyen and Alex Ross) and this week he has worked on portraits of the Trinity (actually, Wonder Woman got a separate piece) which are just pitch perfect. If you like his art, make sure to follow him on either Tumblr or Twitter. Be forewarned of his awesomeness and of the sexiness of his art, no gender distinction.