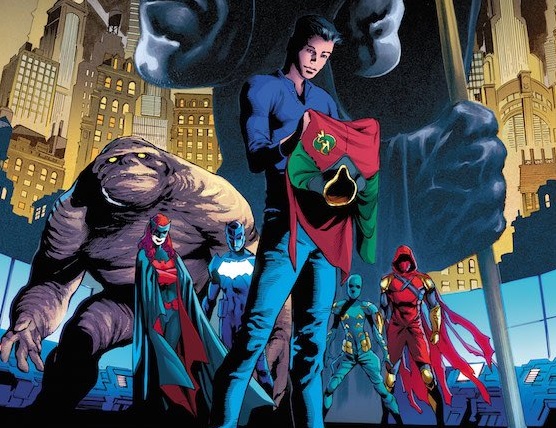 Sorry for the mess down here, friends, but yesterday was Alfred’s day off and things got a bit out of hand. It was Father’s Day after all, and the old man deserves a little rest. What would we be without the sexiest, wildest, sarcastiest (is that even a word?) and best father figure of the entire DC Universe? Forgot to mention, hottest, and Snyder agrees with me on this one. Of course Bruce is also a father, but we all know who it is that keeps order in Wayne Manor. So, happy Alfred’s Day! This week we also had an amazing homage to Adam West as the Bat-Signal shone on the sky of LA. Some of our members attended the event, including Paul Dini and Jim Lee. The most important name to attend it though was Burt Ward. And as Dini put it and I could not possibly say it better, “Long may it shine to inspire the good and terrify the wicked.”

KING ruled this week, awful pun intended. First things first, and we’ll start with him joking about the frozen Robins, a plot point left open by the end of I Am Suicide. For those not following the title, Batman took Nightwing, Red Hood and Robin to the Fortress of Solitude and left them there in cryogenic-like chambers. And did not return to get them. He’ll just go after dinner. Now on to the upcoming arc, “The War of Jokes and Riddles”, he’s teased two scenes to come, both focusing on the two main villains as they stare at themselves in the mirror. Also, he further confirmed the Kite-Man special issue, probably titled The Ballad of Kite-Man, part 1. He’s also shared a DAVID FINCH original from the previous issue, showing Catwoman and Batman leaping through Gotham. And if you are not aware, there is a Batman story by King and Finch running for the Eisners on best short and it can be read for free. It is a sweet piece focusing on how Ace came to live in the Wayne household.

September 27. That is the date when we will finally have Tim Drake back. I mean, we all knew he would return, it’s just nice to know when. The official cover by Eddy Barrows has been disclosed and it is a direct reference to the cover for Batman #441, part of A Lonely Place of Dying. For those unfamiliar, this was the story arc in which Tim Drake got introduced in the Batman mythos. Holding the Robin uniform in the original cover is Dick Grayson and not Tim Drake, who is standing in the background. At this point, Dick has long stopped being Robin. To put it more clearly, this is a RETIRED Robin holding his uniform. Suggestive. Now let us hear a hooray for the return of Timothy Jackson Drake (Wayne depending on which continuity you hold true). This story will be set in Detective Comics #965, meaning that the Spoiler storyline will be a two-part story instead of the traditional six-issue arc.

All Star Batman has its days counted. It was announced this week that the title will be ending with issue #14, making the current arc the last one. But never fear, my dear bats, for SNYDER will be moved to a new title in prestige format and the previously announced collaborations will still happen, such as the one with SEAN GORDON MURPHY. I guess we will be having TWO mystery projects by this fellow now. Holy secrecy, Batman.

To give you the picture of how much trust DC has put into this gentleman, it had been 8 months since he`d  last updated them on his work. Eight months running free. There have been few Batman solo titles in recent past, namely Batman: Noel by Lee Bermejo and Batman 100 by Paul Pope, both highly acclaimed, so it is very easy to set high hopes for this title. Just as Jock pointed, Mr. Murphy’s art is full of depth and details, setting an atmosphere like no other. To accompany this exchange of praise between those two, let us have an atmospheric panel by the man himself.

Just as Gene Simmons declares his intention to trademark the devil’s horns, GREG CAPULLO comes and shoves it right on his face by making this cover for Dark Nights: Metal #1. SCOTT SNYDER tweeted it, then TOM KING shared the image with the outline and JONATHAN GLAPION showed the process of painting the whole thing black. And Ronnie James Dio is very happy somewhere up there watching us, because I’m sorry Gene but the horns belong to someone else. TYLER KIRKHAM, following the cue, also shared his variant for an upcoming Metal issue. It has Wonder Woman, it has Batman and it has a dragon, and all of this just sounds like something out of a Manowar song.

And to celebrate the release of Dark Days: The Forge this week, SNYDER has made a small Q&A session on his Twitter. Some of the topics raised were the perpetual wait for Duke’s codename (“it will soon be revealed” is his standard answer if you want to know), the surprise that it was liking to write Hal Jordan, and that YES we will have Nightwing – and his assets too. Most important though is the fact that the 3 Jokers story will not be told in Metal but very probably in Doomsday Clock, as Snyder says that it is Geoff Johns’ story to tell.

CARLINI has shared a time-lapse video of her doing a quick commission of Batgirl. It shows in 29 seconds art that I couldn’t dream to make in 29 days.

SEELEY & KING strike again as they remember an unsuccessful pitch for a “Mission Impossible meets Romeo and Juliet” story during their Grayson run. Nothing like remembering a Robin/Batgirl storyline while writing cannibal Dwarves.

FRANCESCO FRANCAVILLA is back in the ‘cave with his retro-steampunk-dual tone-I don’t know how to define it by a word other than awesome, which is vague so I won’t use it- take on the Caped Crusader. This time we get Batman in the cockpit of the Batmobile, a very rounded cockpit at that. DC, just give Francavilla a book where Batman wears goggles. That is all I’m asking for.

MARCIO TAKARA has also come knocking with a commission in hand showing Batman with Wonder Woman. The lasso looks so fluid and dynamic that it almost made me bypass my fellow bats.

To close this week we have our frequent guest JUAN FERREYRA. I know that Oliver Queen is not usually welcome in the ‘Cave but Green Arrow has been one of my favorite Rebirth titles week in and week out, and Mr. Dark and Broody Wayne will be appearing in issue #29. Juan has been practicing drawing the Bat and presenting us with amazing pieces in the process. He is so much at home in the ‘Cave by now that he is even pulling pranks and — will somebody PLEASE turn the lights back on?! I have a weekly column here to finish, folks! So I present you, “BATMAN:BLACK & a tiny of white” and “blackout at the BATCAVE!”