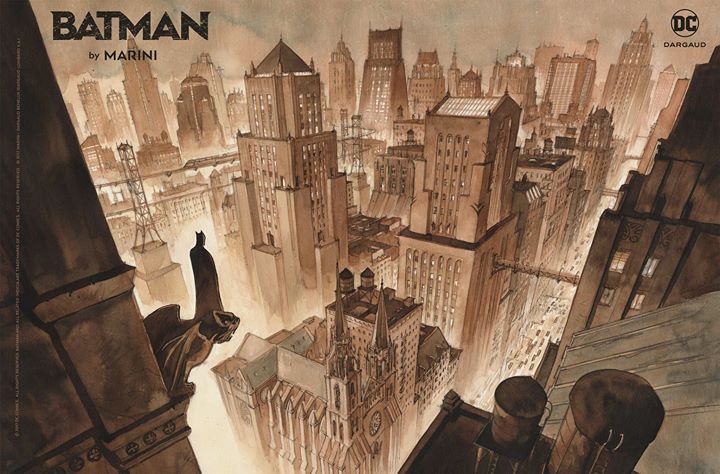 This week we have a lot of introductions to make, as a ton of announcements has fallen on our heads. Between the seven one-shots spinning out of Metal, all of them evil versions of Batman, and the Gotham Resistance crossover with Teen Titans, Nightwing and Suicide Squad we are going to be having a crowd down here in the ‘Cave for quite some time. Not only were those titles announced, but also ENRICO MARINI’s solo Batman project, a partnership between Dargaud, his regular publisher, and DC Comics. The title will be released in the US and Europe simultaneously and in two formats, probably American and European format, which has bigger pages. From what I could gather, Marini is BIG in the European market. Even if he wasn’t, just by looking at his first take on Gotham left me in awe and expectation for what he is going to deliver. My dear bat-mates, please welcome Mr. CLAY MANN to our board meetings. He comes with recommendations from Mr. King, who sent us this piece by the artist from his issue in The War of Jokes and Riddles. Also, Mr. King would like to inform everyone that there are quite a few references hidden in the last issue of Batman. Three to be more specific, as he has stated in his interview to Geek History Lesson this week. Some have already been discovered, such as the bat coming through the window in Year One. as well as panels from the first appearances of the Joker and the Riddler. While we hunt for the third one, the man is having tons of fun writing his scripts, coming up with descriptive phrases such as “PANEL 6: VENTRILOQUIST yelling at the camera, freaking the f— out.” and “DEE and DUM are on the floor, their asses having been kicked.” What a mastermind, what a genius.

I would also like to welcome CHRISTOPHER SEBELA, who will be co-writing the two-part story arc focusing on Spoiler, titled Utopia/Dystopia. Continuing his streak of sharing little teaser images of his upcoming solo project, this week Sean Gordon Murphy has shared with us a detail of a cover in process and a highly stylized little shot of his Joker, whom he says it will be okay to have a crush on. I personally am far from having a crush on the clown but am very close to having a crush on his art.

SCOTT SNYDER reassured the fans about his project with Mr. Murphy, saying that he will start working on it as soon as All Star finishes. GREG CAPULLO is done with issue one of Metal so this week has been slower on posts for this section, but he did share one of the upcoming covers.

I’d like to take a minute to thank DC for putting together such an amazing team of artists for the Metal tie-ins. The evil Batmen one-shots and the Gotham Resistance crossover were both announced this week, and I’d like to introduce the amazing creative teams to whoever doesn’t know their work. First of all, CARMINE DI GIANDOMENICO, who will be working on the Flash evil version of Batman together with JOSHUA WILLIAMSON. They are the regular team currently on The Flash and are doing a quite fine job of it. Next we have FRANK TIERI and RICARDO FEDERICI – who is also Italian – working on the Cyborg version. I have to confess that I am not very familiar with either of them but just look at Federici’s art and build up your expectations just as I have. Behind the Lantern version of Batman are SAM HUMPHRIES and ETHAN VAN SCIVER. Humphries is currently writing Green Lanterns and Van Sciver is drawing Hal Jordan and the Green Lantern Corps. Last for the Batmen but surely not least are PETER TOMASI and FRANCIS MANAPUL behind the Wonder Woman version. Introducing those two is like having Batman’s origin story at the beginning of a new franchise: it need not be done, but they do it anyway for context. Tomasi is the guy behind some of the very best the Batman Universe comics of the last years, including Batman & Robin on the New 52 and Nightwing’s Freefall and The Great Leap (the last issues before Dick took the cowl as Batman). He is currently behind Superman – he made me read Sups, that’s how good he is – and my most dear Super Sons. As for Manapul, he is one of those super-powered people who scripts and draws and does everything and I have no idea how that is humanly possible. I was absolutely flabbergasted when I picked up Trinity #1 and his was the only name on the cover. This issue features one of the best interactions between the Trinity I’ve ever read. As a little tease for those who haven’t read it, I chose to showcase Manapul’s art with a page from it (and honestly, his insides are just as good as his covers). For those who are not aware, RAFAEL ALBUQUERQUE and HOPE LARSON are Eisner nominees for their run on Batgirl. The Eisner winners are announced during San Diego Comic Con, and so Albuquerque has designed an exclusive Batgirl t-shirt to be sold during the event. Starting with issue #7 FERNANDO BLANCO will be taking over art duties for Batwoman. This is DC again bringing an artist who likes to play with panels to draw Batwoman, but in a much different way from what J. H. Williams III does. Blanco’s work in Midnighter & Apollo was spot on and I’ll never forget the train scene with Midnighter punching through a whole lot of people as the train moves. If you can’t tell already, I am. So. Excited. Issues #24 and #25 of Harley Quinn will be having interlocking variant covers by FRANK CHO and the unfinished art already looks remarkable. This is one to keep an eye out for. I have to confess I am of two minds about the upcoming Nightwing: The New Order, but I cannot deny that this Batcave turned museum art by TREVOR McCARTHY is absolutely gorgeous. I’ve spent quite a few minutes staring at it and searching for hidden details. And you know what? If you pay attention, this is Dick Grayson (the man wearing a cap forefront in the first panel) infiltrating the museum to steal his old uniform and gear. This had me quite a little bit more excited about the title.

We talked about Peter Tomasi and now we’re bringing the second element of the dynamic duo, PATRICK GLEASON. He did a short Q&A on his Twitter account this week and answered the million dollar question: does Bat-cow have an arch-nemesis? His reply to this is the best and worst at the same time: he would reveal it if he ever finished his plans for Robin: Son of Batman. Also, regarding his and Tomasi’s run on Batman & Robin, he’s said that the villains that he would love to, but never got the chance to draw are Clayface, Ivy and Harley.

JEREMY HAUN revisited Batwoman with a Kate and Maggie sketch he did during Heroes Con. It will never cease to amaze me to see what professional artists call a sketch.

And this week we have a guest. JOE QUINONES, the artist working on the Marvel title America, paid homage to Tim Burton’s Batman with a poster for a supposed continuation. It includes Marlon Wayans as Robin (the original casting before he got replaced by Chris O’Donnell, and Burton by Schumacher) and Christina Ricci as Barbara, two characters who never got to appear in Burton’s films. He’s gone as far as imagining a Burtonesque suit for Batgirl. What I love about it though is the split images of the characters in the center. Selina’s masked side and Harvey’s twisted side are the same as Bruce Wayne, not Batman, Bruce thus being the mask and not the other way around.