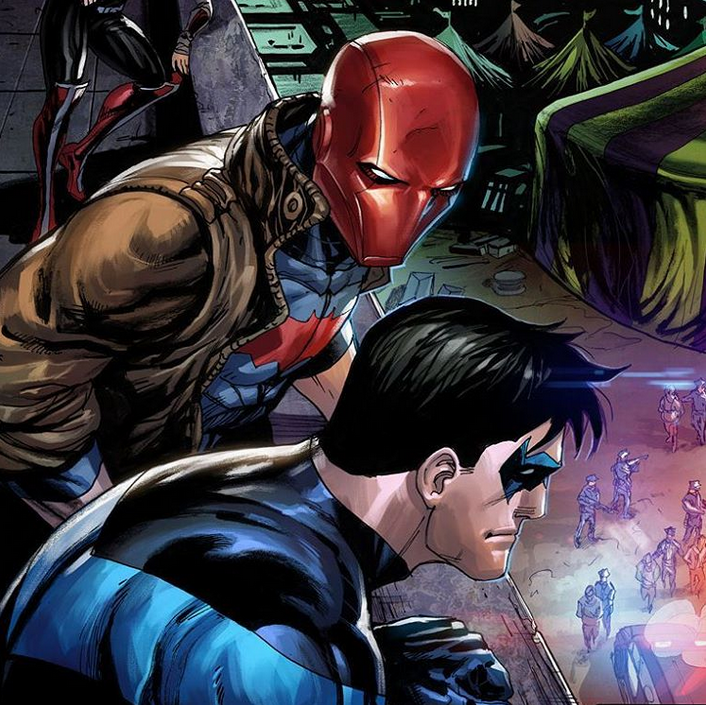 Batman: The Animated Series was the entry point for many of us gathered here today in this cave. Kevin Conroy – Batman’s voice in the series – is regarded as the one true Batman for many fans, as is Mark Hamill considered the one true Joker. For those casting choices and many others in the DC Animated Universe we have Andrea Romano to thank for, who, after 25 years as a voice director, has announced her retirement. You can find her name in the credits of almost all of DC’s animation projects. Teen Titans, Batman Beyond, Justice League, Brave and the Bold, Under the Red Hood, Year One, just to name a few. And to remember how sharp her eyes – or should I say ears – were when choosing the cast, you can watch Nerdist’s video of Conroy reading Batman’s monologue from Nolan’s The Dark Knight. Terrific. After the success of his first “leading the eye” post, MURPHY did a second one, this time including the stopping points of the panels. Beyond that, he shared a WIP of Harley wearing civilian clothes and also one of the Bat. My choice for the week though is a panel that proves that we are not the only ones with a pile of Bat-memorabilia in our houses, the Joker is also guilty of this crime – and a huge Animated Series fan. Marini’s updates for the week were a video of him sketching a storyboard for the book and his first sketch for the project. CAPULLO’s art for the week shows us his take on The Red Death version of Batman.

As reported last week, the covers for Batman: The Red Death and Batman: The Murder Machine have been revealed. JASON FABOK, the penciler behind them, has come forward on Twitter to share the uncolored pieces. The one-shots are still more than a month away and the creators are basically radio silent (probably under DC’s orders), but SCOTT SNYDER has made brief commentary about what exactly is the idea behind them. According to him, the Dark Multiverse versions of Batman are his nightmares of himself, his visions of what he could become if he failed. To make things more interesting, they are all getting their own origin stories and missions. DEXTER SOY, the regular RHATO artist, has been sharing some painted pieces of the Outlaws featuring a Japanese inspired Red Hood. He has actually done this design before, it is a fixed tweet on his account. Whether the new pieces are for the book or for some other purpose is uncertain but it is interesting to see Jason wielding a sword. If his training with the League of Assassins is taken as canon then he would be a more than capable swordsman. Besides, katanas – Japanese single-edged swords – are Damian’s weapon of choice. Also, the sneak peeks into the Annual continue to be shared by TYLER KIRKHAM. This time around we got a piece of Red Hood and Nightwing doing some investigation in the circus (the lineart and the finished version with colors by ARIF PRIANTO), and two bits of the same page showing what seems to be an introspective moment of the team. Our most respected Batcave members had a very inspired week with lots of Bats flying out of their inspired heads. The first to pay us a visit was our regular FRANCESCO FRANCAVILLA as he did some BatTrek pieces, including a Bat-Enterprise, Trek versions of the Joker and Mr. Freeze and the flight crew. LEE BERMEJO, the artist behind Batman: Noel, did a commission piece inspired by one of the Batfleck Justice League promotional shots. Bermejo is my absolute favorite artist when it comes to fabrics. It might be overlooked, but he actually draws the seams. Besides, it is possible to see that the cape is made of a heavier material than the suit from the way he draws the folds of the fabric. This is high praise and I know it, but it reminded me of The Winged Victory of Samothrace, recorded as the first statue in Western culture to ever represent the effects of wind on fabric and one of the few ancient Greek statues to survive to this day. Besides him, our prodigal son PATRICK GLEASON came over to the ‘cave as he revisited Batman on a quick piece made on chipboard. There are two types of people in the world: the ones who draw Batman on chipboard and the ones who use it as mousepad. I am the second kind at the moment.