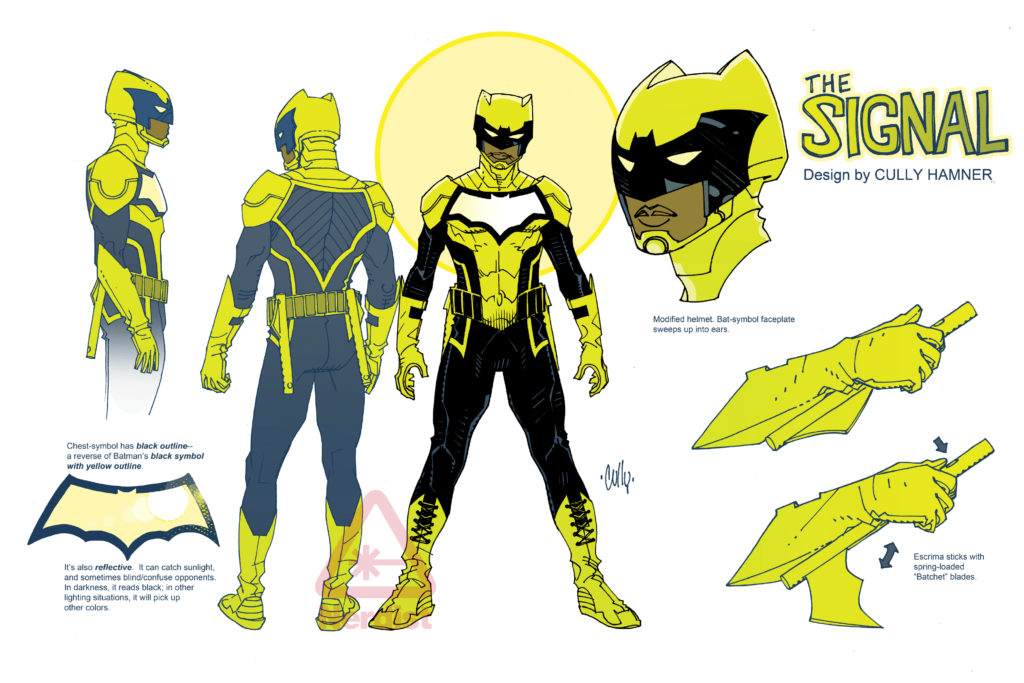 We’re coming from a sad week, a week in which we had to say farewell to Olive and Maps. Gotham Academy has come to an end and to pay proper homage to it BRENDEN FLETCHER, one of the writers of the series, shared a giant thread of art made by fans and regular GA creators alike. Among others, it features art from CAMERON STEWART, MINGJUE CHEN, CLIO CHIANG, JON LAM, BABS TARR, all of whom have previously worked on the title. The illustration we chose here is the most touching of them all: KARL KERSCHL’s piece from when he finished his run on the series. From the entire TBU team and for all of the Gotham Academy fans out there, thank you BECKY CLOONAN, BRENDEN FLETCHER, KARL KERSCHL, ADAM ARCHER, MSASSYK, SANDRA HOPE and everyone who has worked on this title for the amazing work. Big news coming out of Mr. Murphy’s den. First thing was that TODD KLEIN, the almighty master of lettering, will be working on White Knight. And to top that, the cover for issue #2 was revealed and dear sweet Jesus on a Batmobile does it look amazing. I highly recommend you to take a moment to appreciate all of the memorabilia Murphy has depicted in this, including a Bat-tricycle. As he works on his book, MARINI continues to share some inside looks of his drawing process. This week we got a video of him sketching the Joker – big chined, bow-tie wearing Joker – and a Harley Quinn tease.

As you read this article, Dark Nights: Metal will be two days from coming out – or it might have already hit shelves. SNYDER is climbing the walls with excitement, trying to fit all of the variant covers in one single picture and failing. Besides Capullo’s covers (top three, center and bottom right), I can spot Dustin Nguyen (far right), Jock (far left), Andy Kubert (next to Jock’s), John Romita Jr (bottom left), Jim Lee (bottom center), and Tim Bradsheet (second row, left – and you can take a closer look at it here, it looks stunning). The remaining ones I am honestly not familiar with. If you know the artists behind them, do shout out to us in the comments below! As we take our regular peek behind the curtains we can see that CAPULLO continues working like crazy. And wanting to murder Snyder as he has to draw horses, the guy hates drawing horses.

The upcoming RHATO arc will be having the Detective Comics team paying a visit to the Outlaws. DEXTER SOY is already working on it and gave us a first look at how his Batwoman will look like. As for the Annual coming out at the end of this month, TYLER KIRKHAM continues to share some bits and pieces of it and the latest one reveals that KGBeast will be making an appearance.

BATMAN AND THE SIGNAL CULLY HAMNER, who has previously been in the Batcave when working on the special The Question feature, was announced as the artist for The Signal. Together with the announcement we got a first look of Duke’s new uniform, but Hamner says that the image used in DC’s announcement is an early one and that some of the design has changed since then. SNYDER shared an article from Nerdist that seems to show a design that is closer to the final one. Hamner also took the opportunity to announce that LAURA MARTIN will be doing colors for the series. Our guests of honor of the week were ALEX ROSS with a dramatic piece of Batman and the Shadow he did for New York Comic-Con, TONY DANIEL with original pencils from a splash page in Batman & Robin Eternal – if you are wondering, that is Dick as Robin – and FRANK CHO, who has shared his cover from the recently released book featuring  a visual guide to super-villains.