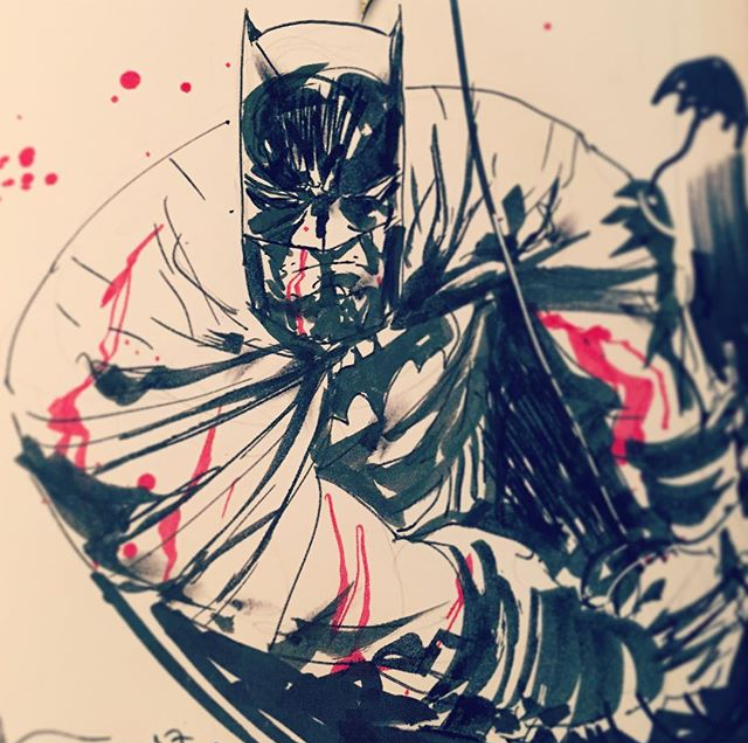 Happy New Year, my most adored flying mammals! I know it is already the 8th of January, but better late than never. And there’s no better way to welcome a new cycle than with some Harley Quinn art by FRANK CHO. 2017 was a wild, wild year for Batman and his absurdly big family. Justice League finally got a live action film, Metal spawned all of its evil Bat-offspring, Batman got the Busiek treatment with Creature of the Night after long years in waiting, Bruce met Flashpoint Bat-papa – and then Rorschach by Christmas time, Tim Drake came back to life despite never having actually died, Dick and Damian canonically acknowledged that they were kind of like father and son once upon a time, the BatCat engagement and that damned Annual that almost led to the whole world drowning in Bat-fans tears, and, most importantly, Kite Man. Hell Yeah.

Talking about Kite Man, TOM KING elected some favorites from his works last year. Like favorite sequence, which he gave to the Riddler escaping Arkham in The War of Jokes and Riddles, by Mikel Janin, who he says “reinvented Riddler as scary and sexy.”  His favorite page comes from the Batman/Elmer Fudd special, by Lee Weeks, who “in 6 panels, defies 75 years of history and makes Fudd a bad ass without losing the character.” His favorite, in his words, just perfect thing, was Joëlle Jones portrayal of Catwoman… dancing with the guard in Batman #33. And favorite issue, Batman #37, with Clay Mann and Jordie Bellaire, “Because it shouldn’t exist. Clay and Jordie had impossible deadlines. Editor Jamie Rich had to get approval for a weird script. DC had to green light our madness.” I’ve said it before and I’ll say it again, here is to more weird scripts being approved by DC. This issue was amazing.

And then we had Batman #38 last week right after that and. Honestly. I love subtext, always have, since childhood, and so Tom King is quickly climbing that most-favored-writers ladder. I mean, the name of the issue is “The origin of Bruce Wayne.” King’s first dark detective issue, he says, will have some “sneaky big consequences.” Oh, and it is selling out, by the way. TRAVIS MOORE, the artist who worked on the issue, shared two of his uncolored pages: insomniac Bruce, and Batman and Gordon meeting in the penitentiary. Moore is honestly beyond incredible, so much so I could sniff the solution of the case by the beginning of the issue just based on how accurate his portrayal of body language is. And, in two weeks we will be getting the continuation of Super Friends, with JOËLLE JONES taking the wheel. She already made me fall in love with Talia, and now just look at her Diana. I’ve probably been delaying reading Lady Killer for too long, I should fix that. Since we’re on the subject of the Amazon, with the release of Creature of the Night, Busiek is one member away from completing the Trinity. He says, though, that he has “about half an idea for a Wonder Woman one, but I’ve had that for years and the other half doesn’t seem to be showing up.” What he does have is an idea for a Flash project, “CSI-meets-SPEED-RACER-THE-MOVIE-meets-Jack-Finney-meets-suburbia-meets-Flash.” I guess we’ll have to wait and see how that turns out. HOLLINGSWORTH and MURPHY have revealed both the regular cover for issue #6 and the variant cover for issue #5, featuring Duke Thomas. Murphy also addressed the possible parallels between White Knight and the events happening in regular DC continuity at the moment, which he says are purely coincidental.

Volume 2 of Dark Prince Charming will only be coming out by summer, but Marini is close to done with his art for the book. He seems to be truly enjoying the endeavor, going as far as drawing the Joker while stuck in traffic – is that even legal? In fact, he’s been enjoying it so much that he’ll be adding 6 pages to the book as extra material. Translated, his tweet reads “My adventure with Batman is close to an end. I only have 4 more pages of volume 2 to draw and ink before I move on to colors. To make my pleasure last longer, I’ve decided to add 6 pages to it. A bonus for me, and for you as well, I hope. The second volume comes out by the beginning of summer.” Marini was also selling some original art through Galerie du 9ème Art. The sales season finished this past Sunday, but we can appreciate some of his work through our screens anyway. We’ll only be getting our hands on Dark Nights: Metal #5 by the end of the month. SNYDER, as usual, gave us an advance little tease of Barbatos-Kong and his Joker dragons, which remind me of Kikyo’s Soul Collectors. InuYasha, anyone? No? Okay then.

The artist team on Wild Hunt is yet to be fully disclosed. The solicitation reads Doug Mahnke, Ivan Reis and others, while Comixology shows a TBD (To Be Disclosed), but we can now confirm one name: JORGE JIMÉNEZ. The artist has recently shared tiny peaks of Flash, Cyborg and the Drowned which he has tagged with Wild Hunt. He is also the only one besides Capullo that I can remember putting the Drowned’s corset to work. This reminds me it’s been a while since our last Bat-trivia, so. Corsets. The structure of corsets used to be made using baleen for the boning, also called whalebone. Despite the name, baleen are in fact a filter-like structure whales have in their mouth, not their bones. Nothing more appropriate than a corset for the Drowned to be wearing, wouldn’t you say? Corsets are also not as painful to wear as they are believed to be, it all depends on how tightly laced the piece is. Except, not really. There is another book by this team that we’ve all been waiting for a while. A tiny little thing called Batman Earth One, volume 3. GARY FRANK’s comment on that? “It’s coming!”

Time flies and the release of Brave and the Bold is quickly approaching, and it is coming on horseback from the Celtic realm of Tir Na Nóg. Nightwing: The New Order will be coming to an end this month, so KYLE HIGGINS has been sharing some of TREVOR McCARTHY’s art for the final issue. He says that not much can be shown without spoiling the plot, but he did share one page where Jake is watching old footage from the time his father was Robin, and another of Dick trying to get Jake to follow him somewhere.

This time, the honorary members roll call is a reunion of some of my favorites, much to my delight.

Starting with LEE BERMEJO, who, rumor goes, is working on a Batman project.

Moving on to JOCK and his very battered, tiny-eared Bat. And finally, two all-time classics who will every so often share past pieces on their social media feed: BILL SIENKIEWICZ and ALEX ROSS.

On New Year’s Eve, ROSS shared a Joker sequence including his most classic Harley and Joker and an incredible black and white comic page. This came a few days after he shared a collection of his Batman ’66 works, featuring this amazing piece that could well have been the cover for the Batman vs. Two-Face animation. Moving on to SIENKIEWICZ, and this is where I cheat and feature two pieces because I could not bring myself to chose only one. Firstly, between an assortment of 4 drawings, there comes Miller’s Dark Knight meets Morrison and McKean’s Arkham Asylum. If I dare to comment on the work of a master, the level of contrast and tension in this piece is so striking that I could not hold myself from doing so. Batman, emerging from the reddish shadow, mighty furious. Joker, leaning back on a beautifully intricate wicker chair, relaxed and laughing, a spot of light set right above him. Their poses, the colors, the setting, everything is screaming that those two are opposites. And even if the Bat is the one coming from the shadows, it is the Joker, under the bright, direct light that makes us flinch. And then, this past week Bill shared another collection, this time focusing on Harley Quinn. Green and Red seem to be the theme for those pieces, but while red dominated the previous one, this one is mainly green. Harley here is the red that invades Ivy’s mainly green world. For those unfamiliar with color theory, red and green are complementary colors in the color wheel. This means, with paints, you can use one to darken the hue of the other. It also means that, when put side by side, they produce the highest contrast possible. Try having this is mind, and let your eye wander around Sienkiewicz’s painting for a while.

Super Sons of Tomorrow came and now we’re only one week away from its epilogue. Of course, I would not let the first event of Super Sons pass by. For this, our Gothamite of the week is OTA.

Ota shares – if not surpasses – my love for the Baby Bat, Demon Brat, the tiniest of them all, Damian Wayne. And she uses that love to produce some incredibly funny comic strips featuring Damian and his companions. Like, say someone decided it would be a good idea to make Jason be responsible for Damian for one night. Or that someday Damian decided to teach Jon how to use a Birdarang. And, even better, a coffee-drinking competition between the youngest Robins. But since this is about the Super Sons, and since Jon is only just starting to understand how to use and control his powers, nothing better than the old-but-gold X-ray joke.

Much like reading Super Sons, Ota’s strips never fail to put a smile on my face. So, if you’re in need of some fun and joy in your life you can go check more of Ota’s work on Twitter, Tumblr, DeviantArt, and Facebook.