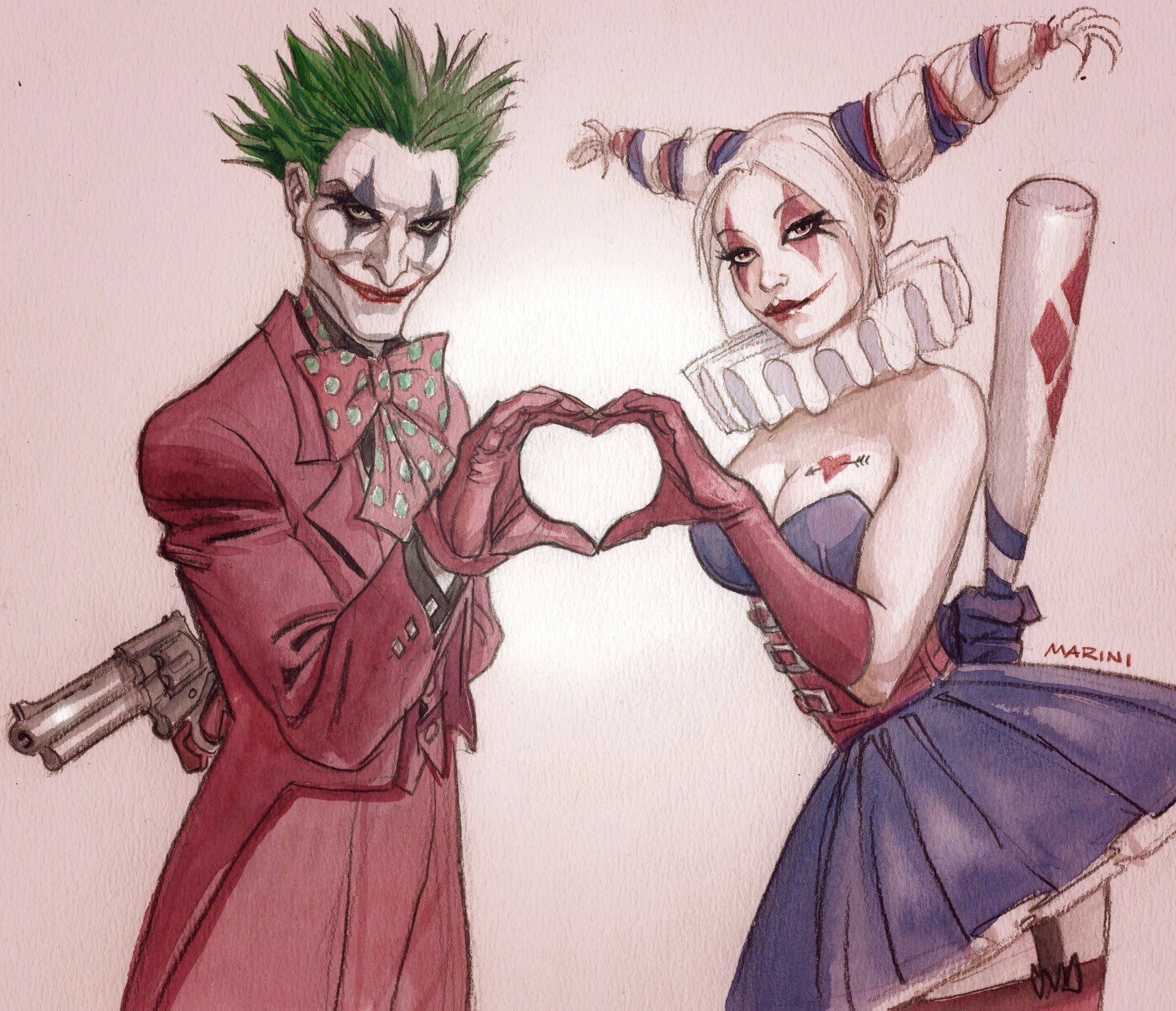 Before we get to this week’s news, I’d like to dedicate a poem to the one and only holder of my heart, the most handsome member of the Bat-family, the one who gets all the romance, the respectable Alfred Pennyworth.

Yet Robins all turn red

You’re the most dashing butler

Despite wanting to smash that silver tray to my head.

I know, I should write a poem book. And since it was Valentine’s Day this week, let us remember the best scene from Batman #37, the Love Tunnel, by CLAY MANN and JORDIE BELLAIRE. For anyone who’d like to be my valentine, please do send me Gerard Way’s Black & White statues. I’ll even DM my address. I mean, I am taken, but you’ll have my eternal love anyway. The statues were made after design sheets by Way for a Batman storyline titled “Kingdom of the Mad”. In it, Bruce went insane after the death of his parents and is an Arkham inmate himself, as stated in the Nerdist’s report. Those who follow Gerard’s career will know that he is an amazing character designer and storyteller of slightly twisted tales, and these statues have me all but begging for this to become a real book. In his Instagram, Way said that “they [the statues] are based on model sheets I had done for my Batman pitch, Kingdom of The Mad, which is still un-produced because of so much else going on and the fact that it is a very dark story and I feel you need to be able to access a very dark place to write Batman in general, at least for me, or at least the story I was trying to tell.” Way has a very large following due to his career both in music and in comics, you add the popularity of Batman to that mix and I’m quite sure these statues will sell very fast. In fact, Way did more than design Batman and Joker. Being part of the unofficial detective group of The Batman Universe, I went and did some digging and have put all of Gerard’s character concepts together in an article all of their own.

Every Con is the same: a new batch of incredible, stunning, très magnifique, world-famous Batman faces emerge from the hand of artist master TOM KING. With Planet Comic-Con it was no different, and in fact, the master decided to approach a new theme in a revolutionary way: a Kite-Man sketch. Out of the picture, the character is left to the imagination of the audience, as King refrains from establishing his features. A stroke of genius. King is now so popular that even his artist peers are recognizing his body of work, even if DC fails to see the untapped potential they have at hand. Lee Weeks himself, the artist whose cover is used as a canvas by King, saw his advocating for a gallery of his cover sketches to be featured in the “DC meets Looney Tunes” trade paperback fell on deaf ears. Nonetheless, the trade has Week’s original Batman/Fudd for cover, which provides more material for Tom King’s art to be made. “Now I can ruin your paperback!”, declared the master. Unfortunately, King has yet to take art duties on his titles, and so we’ll be having Mikel Janin for the next three issues (#41 to #43) plus a collaboration with Joëlle Jones on #44, and then the return of Tony Daniel to Batman on #45 to #47. After receiving the first pages by Daniel, King says they are “hilarious, horrific, and most of all, glorious.” I guess there is no such thing as a book with Booster Gold not being hilarious. And, as if that art team was not enough, OLIVIER COIPEL has been working on the variants. King shared one of his upcoming covers for the Everyone Loves Ivy arc, and honestly. So good.

With how often White Knight has been going back to print, SEAN MURPHY went and put together a sales chart with the numbers he had available. This might be no news for those who follow our sales coverage, but White Knight has been seeing a rise in initial orders, a rare occurrence in the current comics market.

Being a natural salesman, he takes to using his Twitter as a means to understand what fans might want from him. For example, the Batgirl variant was a result of fan requests, and now Renee Montoya might also be getting one. “Harley, Neo Joker and Batgirl covers sold the most. So from a marketing standpoint, Montoya makes the most sense. But I’m open”, suggested the artist. As he works on a pitch for a second volume, he also opened a thread for getting input on what people expect from it. He’s also considering to “focus it less on Gotham politics and more on the characters.” If you have any input on this, make sure to head to that thread, as Murphy created it just this weekend and it is still going.

To cap it all, a tease showing Nightwing and Batgirl doing what they do best: moody standing on rooftops. Nothing like a good, healthy, lawful couple to mark Valentine’s, right? So here comes MARINI’s Harley and Joker, sharing their love with a heart and a weapon in their hands.

With Metal close to reaching its end, the creative team has been continuously asked why not extend the run. CAPULLO had the best answer to a fan who even dared to suggest it just as he was reaching his final page:  “BLOCKED!” Since Mr. Capullo has been working his soul out on Metal, SCOTT took his time to give a longer answer to the question. In a long thread on Twitter, the writer said that they “didn’t want to overwhelm you guys. Had we known you’d sell everything out, we’d have happily added more these last couple months. But we really didn’t want to milk you. We all wanted to create an event where every part was big, singular, compelling.”

Putting together the prequels, the main title, Batman: Lost and Wild Hunt, the Dark Knights one-shots and both crossovers (Gotham Resistance and Bats out of Hell), the event will have no less than twenty-six issues tied to it. Almost all of them went to second printings, some going as far as reaching fourth printings, a feat Scott says was never expected. That is going to be one big, heavy omnibus. Issue #6 will be coming out next month, and we already have a Bat-tease (I believe I just invented the worst Bat-word to ever exist).

I’ll make mine the words of GARY FRANK “Remember that cover from a couple of weeks ago? Well, Mr @bdanderson13 [Brad Anderson] has sprinkled his magic on it.” Johns chimed in, revealing that it will be the variant for issue #6, whose release date is yet to be announced. My living room feels empty without this hanging on a wall.

During the week, Scott answered a few questions regarding the event and the follow-up to it. About the teams that got revealed for the event, he says that “No Justice has a reason they fight in those formations, then, at the end, because of what happens, the teams moving forward are formed. JL will be a line up as yet to be revealed.” Someone also noticed that there are no Green Lanterns on the teams, and Scott says that they will be having a different role in the story. And, if MANAPUL’s tease this week is any indicator, Batman’s team will be the best team. To all but himself, of course. The first issue of Brave and the Bold is coming out this week. Along with the preview pages, Liam also gave an interview to Newsarama. In the article, the cover for issue #4 got revealed for the first time. Despite it not being official material, MIRKA ANDOLFO’s slightly different take on Harley looks gorgeous and deserves to be featured here. Mirka is behind the latest Harley issues, including the one coming out this week.

Some days we wish superheroes were real. We’ve all been there, and when the world brings its ugly head around, as it did this week, that’s when we wish harder. And never, ever is that wish stronger than within the minds of children.

A towel hanging around the neck becomes a flowing cape, a cut-out piece of fabric become a mask, a stick becomes a sword. Or even nothing at all. Nothing, except for imagination. The shadows of heroes that we project on ourselves. The power that lies in the minds of children, that is what prompted JASON RATLIFF to develop his Super Shadows series. The Trinity, Harley, Catwoman, Green Lantern, Teenage Mutant Ninja Turtles, Daredevil, Guardians of the Galaxy. Heroes from Marvel and DC alike get depicted by Ratliff as he portrays kids at their fully realized super-hero potential. In a short article published by Bored Panda, he says that “The image isn’t necessarily about the superhero. It’s about a child’s imagination and potential. It’s about how a kid can be anything they want to be. The guy in the cape just helps represent those aspirations. The hero they see themselves as, or one day being.”

Not only is the concept of the series one to admire, Ratliff’s choice of art style is absolutely resonating with the message. The kids, the real portion of the image, are in a detailed, realistic style. Their shadows, though, are geometric shapes, solid figures of abstraction. Our minds come to play here to tell us who is that character only by the suggestion the blocks of color give us. It shows Ratliff’s background, which, as stated on his official website, “is crowded with fine art and design, so my artwork is a happy marriage between the two.”

Jason’s prints can be acquired on his Curioos store, and his work can be followed both on his website and Instagram.