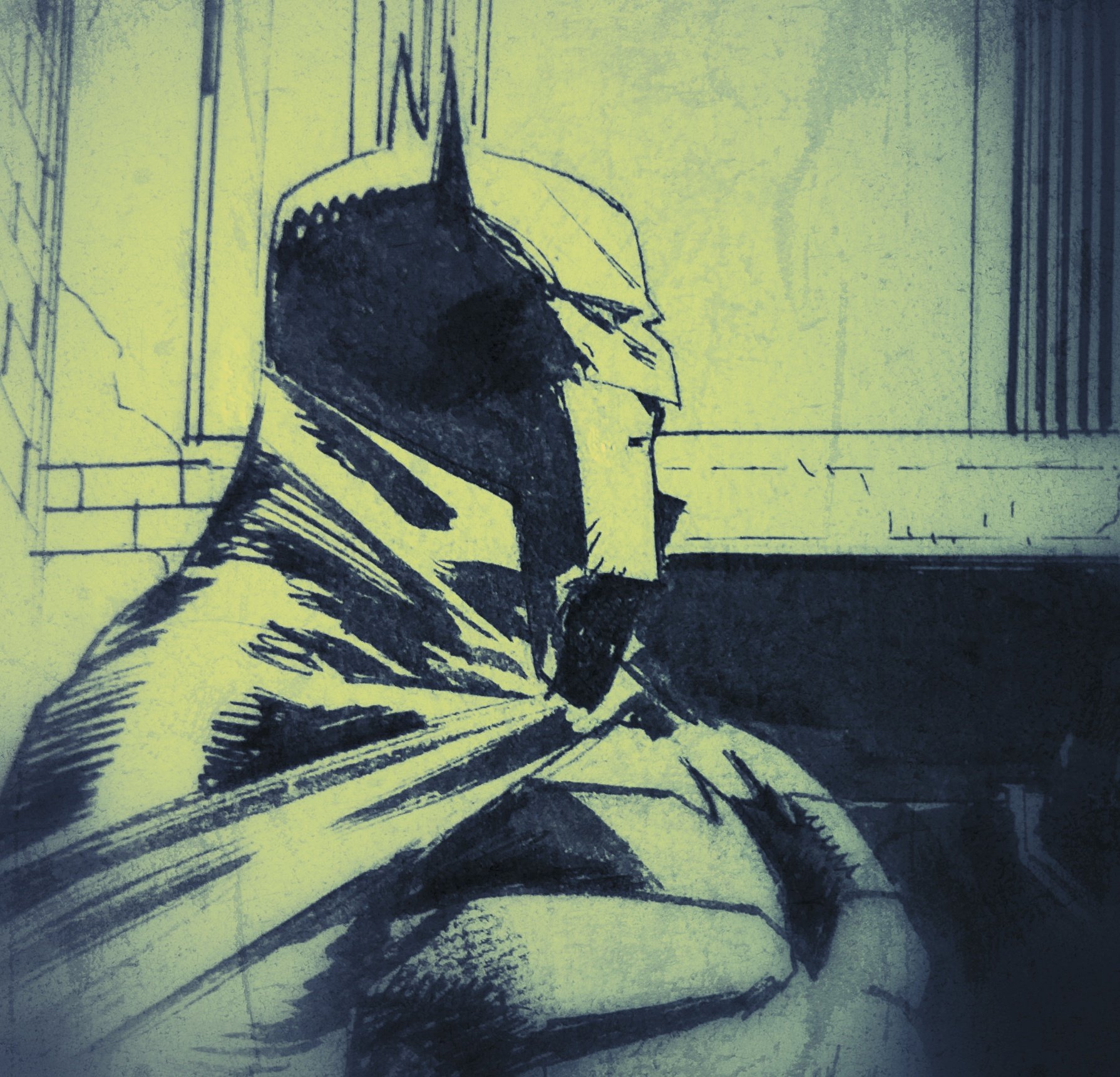 This week, I’ll welcome you all with a question. “Did you ever dance with the devil in the pale moonlight?” This Sunday, Jack Nicholson celebrated his 80th birthday – guy is older than Batman himself, gotta respect that. As an homage to one of our greatest Jokers, FRANCESCO FRANCAVILLA made two special pieces based on Batman ‘89. Just… don’t eat the cake. It has probably been dosed with Joker venom.

Despite this being a week for the Clown, if I had to use a Batman character to describe it, it would be Two-Face. While our creative teams have been very quiet about their Bat titles, leaving us with stories for only about four titles we cover, on the other side we had The Button hitting shelves and DC announcing their new line of books, Dark Matter.

It will spin out of Dark Nights, featuring entirely new titles and new characters, conceived by both the artists and the writers together. This comes from DC’s effort to bring artists back to the forefront of the creative process. A similar effort was what propelled the creation of Image Comics back in the day, with Jim Lee as one of the founding members.

Dark Matter is not exactly related to the Batman Universe, so we won’t be covering it here on the website, but it will feature some household names such as Scott Snyder, Dan Abnett (Titans), John Romita Jr (All Star Batman, DK The Last Crusade), Tony Daniel (Batman RIP), Andy Kubert (DK III), Kenneth Rocafort (Red Hood & the Outlaws, Teen Titans) and James Tynion IV, who is going to be partnered with Jim Lee (whose work I’m not listing because it is Jim Lee). Our boy James is so over the moon with this that he went on a long ramble about how flattered he is and how anxious he is and how he is trying his best to deliver a great comic. We believe in you, James! Well, I do.

So, the first part of the Button came out this week. I am one of those people that goes crazy whenever I find a reference, and the 9-panel grid almost had me screaming out of my window for a second – or a full minute countdown. The boys are keeping quiet about that one, but issue #23 is getting closer and it seems it will indeed be titled “The Brave and the Mold”, as King had been calling it for a while – and here he had me thinking it was just him being funny.

Besides, the cover of the issue has been revealed, and I’ll be damned if it is not a reference to the covers of issue #43 and #48 from the New 52.

Told you I was a reference sniffer. We might or might not see Mr. Bloom return, as he would surely fit into a Swamp Thing storyline.

Five years ago, JAMES TYNION IV had his first comic book published. Let us take a moment to praise the heavens (whichever god you like to imagine is up there) for having him around. In my humble opinion – and I have sales numbers to back it up – he is killing it in Detective Comics.

He is also killing us with expectation, saying that The Button will somehow tie to Detective Comics in issue #956, the finale of “League Of Shadows”, coming out on May 10.

TAKARA, who attended C2E2 this weekend, shared a lot of his commissions, but one character got special treatment, and that is our beloved Cassandra, who got a step by step made of his drawing process. Because I am a girl who gives her sources, here are the links to the five steps [1] [2] [3] [4] [5]

Nothing over he– wait a second, is that a collar? So it seems MURPHY’s Batman will have a collar. Never heard of any other tale set in a dystopian future with Batman wearing a high collar, have you? I don’t think that this take is going to be DamianBats, since Gordon is going to be featured in this tale, but I am always for high collared Batmen (Batmans? We will never know).

For this week we have a very special tale involving our young acrobat. Come, take a seat around this imaginary bonfire, and hear my words. If you are not in the mood for a little tale about DC’s misdoings with our boy in blue, just skip ahead to baby Nightwing.

This is a tale about how this unpublished issue came to be. Once, there was a little boy who loved comics. Said boy grew up and became Co-publisher of DC Comics. Sales were going bad for DC, and this now fully grown man made some changes in the company in order to save it. And then Superboy Prime punched the walls of reality, starting the Infinite Crisis. Our heroes split themselves during this crisis according to what they saw as a priority, and only a death in their ranks could bring them back together. But it couldn’t be just anyone to die, it had to be an important character, someone connected to all of the niches of DC. So the man, fully understanding the workings of the universe at his hands, chose Dick Grayson to die.

The creative team got cold feet, and the man didn’t get to kill Dick Grayson, rather having to content himself with Conner Kent. This whole shenanigans led into some implications for the Nightwing title, such as Bludhaven being destroyed and Jason Todd taking up the mantle for a while, since Dick was supposed to be dead by the end of the crisis.

If you haven’t guessed, this boy is Dan DiDio. Some time later, the whole continuity got to be erased by means of the New 52. After a while, our boy Dan decided to shake things up a bit, and this time he would finally get to kill Dick Grayson. Forever Evil happened. But Dick Grayson’s death was now not so meaningful as it once might have been. Dick Grayson no longer had connections to the whole hero community due to the New 52. In fact, his Titans had never even existed. For people only following the Nightwing title, his death was sudden and his goodbye to the mantle should have come with issue #30. The issue got delayed. When it finally came out, it was a mismatched piece of writing, butchering Dick and Bruce’s relationship and ignoring the mourning of the family.

But in the bottom of this man’s drawer lies the first issue #30 produced. Written by James Tynion IV and drawn by Meghan Hetricks, the original issue never saw the light of day. Its pages got leaked after a while, with no lettering and no coloring. But this week, after SEELEY’s and King’s excitement over the Grayson omnibus coming out in July, Tynion decided that his Nightwing issue should see the light of day, including a little foreshadowing of Tim’s future. If you have a problem with the issue that got released, go ahead and take this unofficial one as your headcanon with me.

Now to break the bad vibes from this little sad tale, have Capullo’s baby Nightwing. Ain’t he precious with those little gauntlets and squishable buns? Let me hear a collective aaaaw. Let us talk about alternative takes on the Bat. This week we had Murphy sharing his version, but did you know that FRANCESCO FRANCAVILLA has a whole series of Batman 1972 drawings? It includes a long haired Gordon, Catwoman as a member of the Black Panthers (genius), turtleneck Batman, and hippie Joker. He has been doing this for a while, so if you want to see more just search for Batman1972 on Twitter and you shall find it.

One of the most iconic alternative Batmen though was brought to us by the amazing team of Bruce Timm, Paul Dini, and Alan Burnett, and it is titled Batman Beyond. This week saw DUSTIN NGUYEN pitching a Terry McGinnis movie for the DCU, because we are not alone with our geeking outs. I myself think that “DC’s Spiderman – a FUN, young, recognizable, IMPORTANT character” is gonna come to the movie universe by means of Nightwing, but hey, I might be a little biased here.