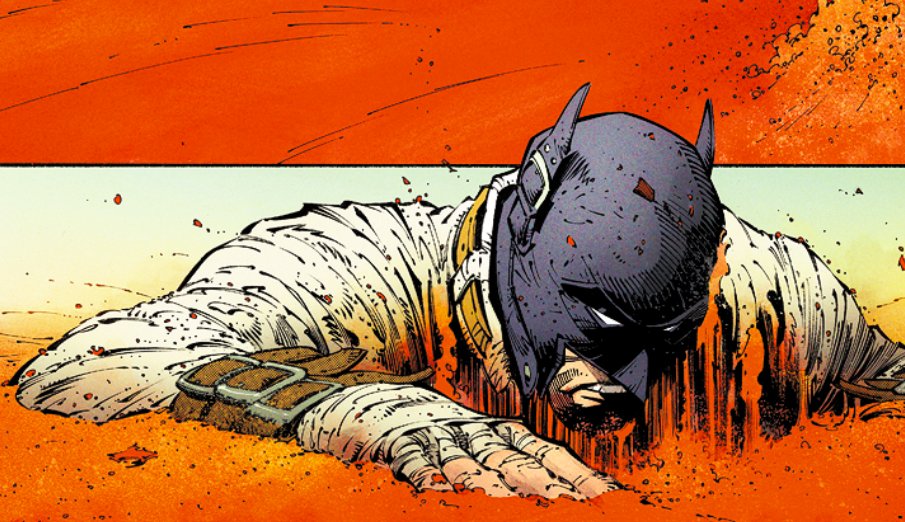 With the Batcave now fully unthawed we can gather in this cozy, lovely, damp underground den. This will be an unusual gathering where we only have two regular titles to discuss. Things in Gotham have been slow, fellows, rather slow. But, on a side note, NEAL ADAMS still draws the best Batman. This person who here speaks cannot wait for his Detective Comics #1000 story. Since the beginning or Rebirth, Batman editorial has been diversifying the art style for the title as much as possible. From the traditional DC house style of Tony Daniel to the flowy inks of Joëlle Jones, the richness that comes from this variation coming right after Capullo’s long run with Snyder is one of the blessings brought by the double shipping. Let us then ignore the number of curses that it has brought and appreciate two of the artists coming to the title: JORGE FORNÉS with his heavy, marked inks and shadows – a perfect fit for a detective story, if that’s what we’re getting from him. And, working on the main Bat title for the first time – even if only on the cover art -, DOC SHANER. His will be the variant for Batman #66 and he shared the image saying “If I’d known this was going to be for issue #66 I would’ve tried to do some gag on Batman ’66. But I didn’t, so I tried to a sort of send-up to Tom’s run on the book thus far.” 1,000 might well be what some of us end up spending with Detective Comics #1000 with the number of incredible variants that will be sold. This past week ADAM HUGHES shared his Catwoman variant, sold exclusively by Frankie’s Comics. Another variant that got revealed this week was the collaboration between DAN JURGENS, KEVIN NOWLAN and ALEX SINCLAIR, a wraparound exclusive to Dynamic Forces. Some of the interior content has also been popping up here and there. WARREN ELLIS and BECKY CLOONAN are working on a 10-page story together and she shared a peek of her Batman. It was also revealed by Newsarama that PAUL DINI and DUSTIN NGUYEN will be telling a short tale focused on the villains. Titled “The Legend of Knute Brody,” it will be told in the format of a television exposé about Knute Brody, a henchman with a tendency of screwing-up who has worked for all the main villains. The creators gave a full interview about their story, touching upon their old partnership in Detective Comics and Streets of Gotham and their creative process when it comes to Gotham. By the way, if you haven’t read Streets of Gotham do yourself a big favor and read it. Seriously. The Batman Who Laughs will be getting a one-shot spin-off covering the origins of this world’s Batman. The issue will feature EDUARDO RISSO on art, and Snyder has shared one of his pages with the caption “This monster has bats in everything from the city grid to your GPS. He wants you dead, your car will just drive off a bridge and you won’t even know it’s him who killed you. All of Gotham is his damn batcave.’ Jim Gordon” Joker in a jar. I mean, one has to imagine how the brainstorming for this storyline went before Snyder and Capullo got to this point. If ever there was one, this could well come from an extremely productive fever dream. CAPULLO has been sharing a number of glimpses into his process while he works on the story and I get some Castaway vibes, except this Wilson is an evil smiling maniac. Snyder also shared a finished panel, inked by JONATHAN GLAPION and colored by FCO PLASCENCIA. In it he revealed a change in the name of the comic, from The Last Knight to Last Knight on Earth, and that the release date will soon be announced. CURSE OF THE WHITE KNIGHT

Sean Murphy has clearly grown very fond of Batgirl after White Knight and she seems to continue being a major player in the second volume of his Murphyverse. Well, her and the Batmobile. In a mock poll this week, Murphy inquired “Batgirl is angry at Bullock. Should she: 1. Walk away 2. Clock him 3. Accept his apology 4. Fill in your own answer”. For now, we close this session, with the anticipation for Detective Comics #1000 building even higher each week. Oh, and just a quick note before we leave the Batcave, Quantum Mechanix will be releasing the cutest statue of Batman to ever exist and I bet no one ever thought Batman and cute would be used in the same phrase without a negative between them.