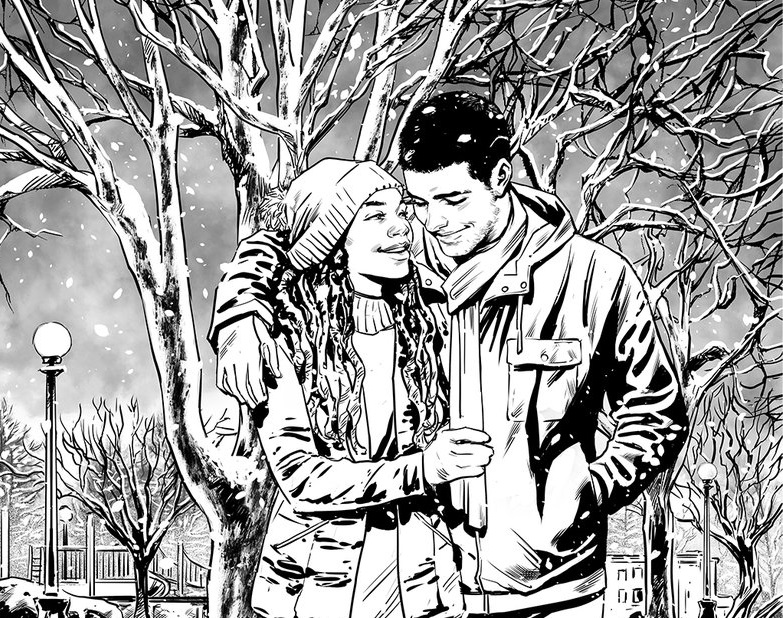 Zombies and undead of the depths of Wayne Manor, we gather here at this ungodly hour to talk this past week in comics news. This coming May all of the DC Universe will be at the hands of one reaper called Tom Taylor who’ll be chasing us all with a scythe called DCeased, a six-issue out-of-continuity horror/zombie event. In an exclusive interview to IGN that revealed the project, the writer revealed that, after being invited by editor Ben Abernathy to work on a tale written in such tones, he “couldn’t stop thinking of new and terrible ways to torture my favorite heroes in ways that made Injustice look tame by comparison.” Joining Taylor in the creative team will be artists Trevor Hairsine, Stefan Gaudiano, James Harren and Rain Beredo. Taylor shared the news on his private Twitter account with YASMINE PUTRI’s horror variant cover for the first issue. Another artist who’ll join the ranks for variant covers is GREG CAPULLO, whose history with drawing horror themes makes him pretty much the best fit possible for drawing horror in DC Comics. And since we’re on the topic of death and demise, some rumors have been going around about DC chopping its line down to twenty titles only after Dan DiDio’s presentation in ComicsPro. A report done by Graphic Policy should put everyone’s mind at rest. Debunking this wildfire, they report that DiDio actually “estimated it’d be about 10-15% of the line. With between 50-60 comics released a month and 30-50 graphic novels, that comes out to 5-9 fewer comics a month and 3 and 8 fewer graphic novels.”

And to end this opening of the Batcave in an even higher note, KRISTAFER ANKA revealed on his Twitter account that he’ll be drawing for the first time ever for DC Comics! In a Young Justice flashback story! Featuring Tim and Stephanie Brown! Just to get a taste of what’s to come, here be his take on Timmy recently published on Instagram. (He also drew Dick, Jason and Selina, so worth checking out.) A one-ton piece of news has been dropped on us. After floating out of the edge of a cliff for about five seconds, the upcoming Batman #67, featuring LEE WEEKS and JORGE FORNÉS on art, will be an official, non-official, if you consider it takes place in a dreamscape, sequel to Batman/Elmer Fudd.

King, in sharing the news, teased that it will involve the Road Runner, saying that “It’s in Batman 67, part of the Knightmares arc. Not allowed to say who’s in it exactly, but It involves a crazy chase and a lot of beepbeeps.” In the same tweet, he shared two sequential pages showing Batman hot on the heels of a certain runaway person. King also shared a preliminary cover by MIKEL JANIN for Batman #66, teasing the appearance of The Question in the issue. Lost with all the covers for Detective Comics? Fearing your wallet won’t be alive by the end of it? Well, I have some good and some bad news all coming in one single package of Comic Burst’s compiled list of all covers that will be available for Detective Comics #1000.

The most notable one that got revealed just this past week was undoubtedly ALEX ROSS’ homage to Detective Comics #27, Batman’s first ever appearance in comics. The variant will be sold exclusively by the artist’s official shop. Also, after the free release of Brian Bendis and Alex Maleev’s short story on the previous week, some further details have emerged about other stories, namely Snyder and Capullo’s short. The Nerdist reports that the duo will introduce a new team to the DC Universe named the Detectives Guild, “consisting of Batman, Hawkman, Hawkgirl, Martian Manhunter, Elongated Man, Detective Chimp, original Detective Comics protagonist Slam Bradley, what appears to be the Vic Sage incarnation of The Question and Traci Thirteen.” After his debut as co-writer on Nightwing, Zack Kaplan has been getting plenty of questions about his take on the characters which can give some insight into how he chose to develop Lobdell’s argument. First and foremost, his color scheme of choice is black and blue, so he’s got some points on my book. The writer also gave an interview to Newsarama talking about both his process of becoming familiar with the character and the process of Ric slowly – very, very slowly – returning to his Nightwing persona. He also touches a bit on the mystery that is the past and origins of Joker’s Daughter.

On Twitter, Zack addressed some of the same issues that he’s talked about in the interview such as his take on Joker’s Daughter. The one topic that got left to twitter-verse alone was the brief appearance of Barbara in the last issue of Nightwing. The writer got asked about the conversation between Bea and Babs, how she denies having ever had a relationship with Dick. Kaplan says that for him “Barbara isn’t denying she and Dick have past romance, she just doesn’t want to reveal it to the new girlfriend. She came for other reasons, so she can’t have Bea thinking she’s some jealous ex, even if deep down, maybe she is a little… I think one of the great things about Ric/Dick Grayson and Barbara Gordon is the on again, off again love story – they can’t catch a break!”

The issue also brought TRAVIS MOORE back to Nightwing, bless his hands who draw the best Dick Grayson in present times. The artist shared a number of his ever-so-beautiful uncolored pages on Twitter. The Batman Who Laughs debuted as the top seller for the month of December and it seems it will continue to be so as preorders for its tie-in, The Grim Knight, are reaching the 150,000 copies mark according to Scott Snyder. These past few weeks the writer answered a couple of questions regarding the story, claiming it can be read “as a special singular book, and you can, like Black Mirror, but something will happen at the end that’ll cause big new story in the DCU.” He’s also said that issue #4 will provide an explanation for how the Batman Who Laughs sees.

Meanwhile, JOCK, the artist on the title, has been sharing an enormous amount of his works in progress. As usual, they all look incredible. Possibly the most interesting one for those who never got to watch Jock drawing is the thread showing his process from rough pencils to lines and inks, and it is incredible how little he draws before going to the inks. Last Knight got its official release date AND cover preview this week! To be released May 29, the story that is being advertised as the final chapter of Capullo and Snyder’s Batman will follow the adventures of talking head Joker and grim Batsy. And they’re being oh so domestic about it.