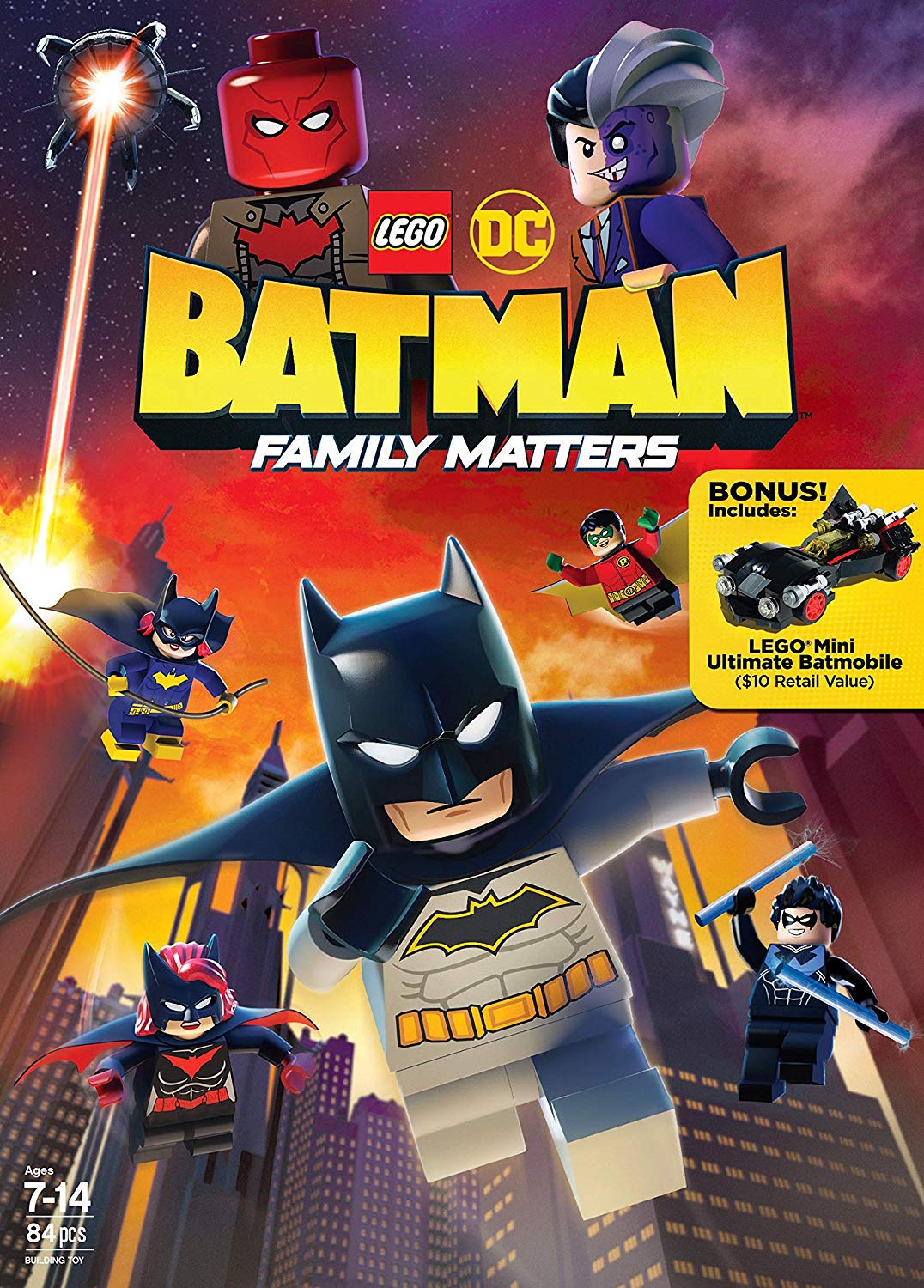 Overview: In the latest LEGO DC Super Heroes animated film, Batman and his team face off against the Red Hood while a larger threat looms.

Synopsis (spoilers ahead): After capturing Solomon Grundy, Batman decides to shirk his responsibilities as Bruce Wayne, selling Wayne Enterprises and relying on a new computer system, Brother Eye, to run things as he focuses on fighting crime.

Meanwhile, the Red Hood, teamed with Two-Face, surfaces and challenges Batman and his team, stating that he has hidden bombs all over Gotham. The Bat-Family splits up, only to be captured one at a time by the Red Hood. Batman is lured to the Batcave where he faces off against the Red Hood, who reveals himself to be Jason Todd. Jason Todd and Batman resolve their differences, with the planted bombs turning out to be confetti-filled fakes.

Their reunion is cut short as Two-Face, now in control of Wayne Enterprises, uses Brother Eye to wreak havoc on Gotham City. Two-Face demands that both Bruce Wayne and Batman meet him at Wayne Enterprises. Two-Face is defeated with a cardboard cut out of Bruce Wayne and Brother Eye is taken offline after mending some hurt A.I. feelings. The film ends with Jason being welcomed back into the Bat-Family.

Analysis: As you might expect, this is a family-friendly and light-hearted take on the Batman mythos. Despite being aimed at a younger audience, the film is actually very funny, with an eye towards entertaining parents as well as the kids, which is always appreciated. The film is very much set in a world of LEGO but in a way that feels playful and manages to avoid feeling like a toy commercial.

I think the most interesting thing about this latest LEGO DC animated movie is how it decides to adapt Batman: Under the Red Hood, which is a very dark and adult-themed story in the comics into a light and kid-friendly cartoon; which it does surprisingly well. I liked how the film plays with expectations from the comics about Jason’s murder before coming up with its own, family-friendly reason for Jason’s absence and transformation into the Red Hood. I did find that the Brother Eye subplot felt tacked on and unnecessary and that a slightly extended version of the Red Hood portions would have made it more complete.

The film is packed with references to the Batman Universe. Batman in the opening scene is wearing a costume straight out of Arkham Knight before switching to the Greg Capullo designed Rebirth suit for the majority of the film. There are also plenty of Easter eggs like a nod to the Gray Ghost. I appreciated the attention to detail considering this is a product isn’t necessarily aimed at hardcore fans.

The film manages to a wide cross-section of the Batman Universe, with Nightwing, Batgirl, Batwoman, and Damian Wayne’s Robin filling out the supporting cast as well a who’s who of Batman’s rogues’ gallery like the Riddler, Penguin, Scarecrow and others. The film juggles all the principal character’s well in a way that doesn’t seem overstuffed. Regardless of the fact that this is a kid-friendly version of Batman’s world, I did take issue with some of the characterizations in the story. While characters like Batwoman and Nightwing seemed more or less on point, Damian was missing his snarky overconfidence and they write him as a more generic and happy-go-lucky character. While I have no issue with the filmmakers playing things more broadly, it just seemed too off-model for Damian. The larger issue I had was with Batgirl being relegated to an unreasonably ticked off girlfriend. I like that they are playing her relationship with Nightwing, but there was a better way to do it then what is presented here.

The voice cast features a lot of returning players from other animated films. Troy Baker returns as Batman and while I don’t really like his Batman in more straightforward offerings, his take on the character works perfectly for the LEGO version of this character. A standout for me was Will Friedle as Nightwing. It wasn’t terribly different from his work on Batman Beyond, but he still worked for me as Nightwing.

Final Thoughts: I really enjoyed this trip through a Gotham built out of LEGO. So much of the Batman content available is aimed at a mature audience and it is nice to see that there is still content being produced that is aimed at introducing the next generation to the Batman Universe.

Editor’s Note: LEGO DC: Batman-Family Matters is now available on Digital HD, Blu-ray and DVD. You can order your copy, and help support TBU in the process, by heading over to Amazon.