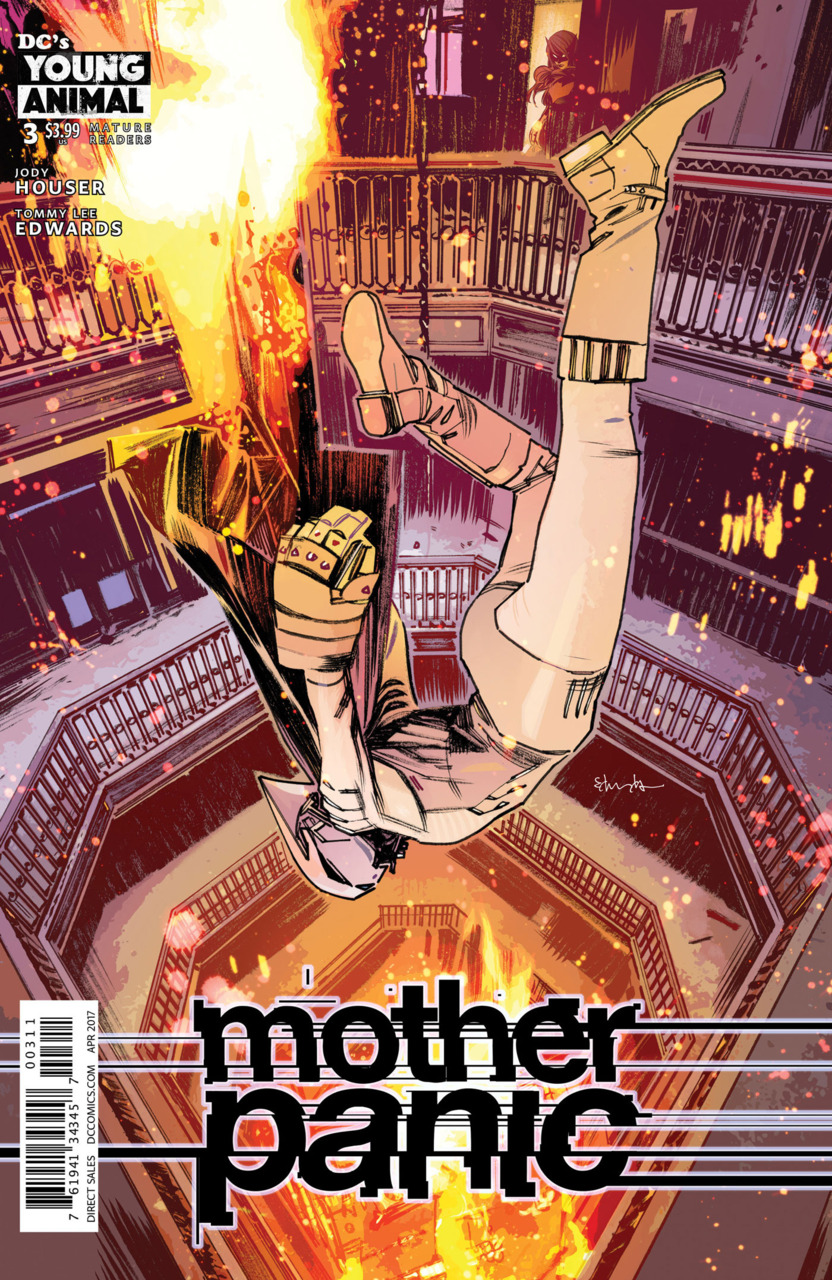 Violet meets Batwoman in the streets and rooftops of Gotham as her motivations begin to emerge. Is she a hero or a villain? Find out in Mother Panic #3.

Batwoman is giving Batman her update on Mother Panic’s activities. The two are trying to understand who this newcomer to Gotham is and what her motives are.

The story flashes back fifteen years to the funeral of Violet’s father. Violet’s adult brother, Victor, says he wants to protect Violet from any scandal caused by their father’s death. Victor has decided to put Violet in Gather House, a boarding school outside of Gotham.

Mother Panic is flying around the city and meets Batwoman on a building roof. Batwoman tries to talk with her but Violet is in no mood for conversation. The pair spar and Violet is clearly an accomplished fighter. Violet releases an electric charge that sends Batwoman off the roof which affords Violet the chance to continue her quest.

Mother Panic heads to the address that she got from Hemsley. She breaks in and finds Gala sitting in a regal chair surrounded by chained up children. The children are singing the hymn “Sinners, Turn: Why Will You Die”. Gala welcomes Mother Panic to Heaven. Panic breaks the chain of one of the children who promptly runs off. Gala sets off a firebomb which she uses as a cover to escape. Panic has to choose to either pursue her or save the children. She saves the children. The burning building reminds her of a fire in her distant past.

Mother Panic drops off the kids and watches the building burn from a dark alleyway. Batwoman sneaks up on her and tells her that she did good to get the kids out of the building. Violet isn’t in the mood to be praised.

She heads over to Hemsley’s garage where she finds the cretin dead on one of his destroyed cars. She doesn’t feel upset at Hemsley’s death.

She remembers fifteen years ago when her brother dropped her off at Gather House. It turns out that all of the concern he showed for his sister at their father’s funeral was false. Victor wants Violet to suffer here at the school for causing the death of their father. One of the nuns, Mother Patrick, restrains Violet as Victor leaves her.

Back in the modern day, Violet is being examined by her doctor who is happy with her condition. There is apparently something that is ‘integrating nicely’ in her arm. The doctor recommends that she keep Dominic in the house to take care of Violet’s mother. We see Dominic and her mother talking. As Dominic leaves, Violet’s mother thinks how much she wants him to come back for a party so they can all ‘watch it burn down together’. Until next month…

Jody Houser’s story is really beginning to hit its stride. We still aren’t exactly sure what Violet is after and what she hopes to accomplish, but the further we get into the story the more compelling it gets. The character of Violet is getting much clearer. In her back and forth with Batwoman, Violet shows a very snarky and self assured side. One would think that having the premiere crime fighting team in Gotham beginning to admire your work would feed one’s sense of pride. Not Violet. She clearly has a mission and isn’t about to let anything, including nice words from the Bat-Family get in her way. It is also interesting to note that she has fighting skills as well as, what Batwoman calls, ‘super strength’. I am dying to know more about how that came about.

Violet’s suit is also another center of curiosity. What is the purpose of her helmet and what, exactly, are those giant gloves all about. Finally, what is the connection to her alias ‘Mother Panic’ to the head nun at Gather House ‘Mother Patrick’. Are both the name and costume somehow related to her? Only time will tell.

The art by Tommy Lee Edwards is simple, though a little scratchy for my taste. It works here especially with the lurid color scheme. The ‘violet’ reds and oranges are colorful, but also retain a darkness that fits the mood of the book. There aren’t any characters that are drawn as conventionally attractive people, yet the reader is drawn in by their looks and their attitudes are clearly shown in their faces.

I really enjoyed this issue much more that the last one. I have felt that the comic team on this book were really on to something from the start, but that it was going to take some time for it to come together. At this point I am feeling more and more that there is going to be a terrific payoff for some patience now. I am still going to be conservative with my rating, but I think I am going to need some room to go up. I recommend this title.