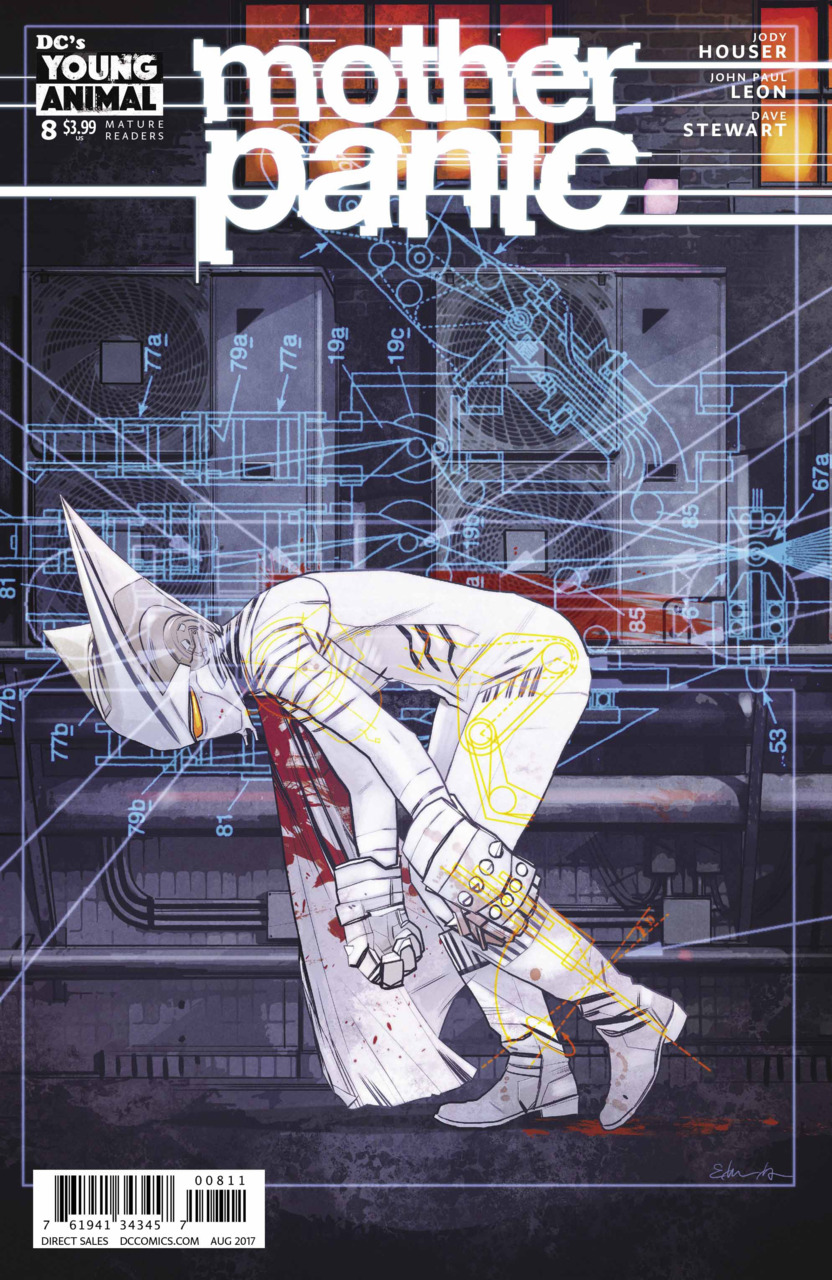 Violet struggles with the case of the Body Bag killer as well as struggling with her implants. Along the way she picks up an army of long tailed informants in Mother Panic #8.

The Plot (spoilers ahead): Violet remembers the little girl who had her parents killed. The memory of visiting her in the hospital and the hug she gave Mother Panic is still vivid in her mind. The girl has no one, and Violet knows how that feels. She remembers back to her past at Gather House. Mother Patrick had her in a frighteningly brutal training regimen. Mother Patrick was trying to build an organization that can take Gotham away from old time Gotham organizations like the Court of Owls. The surgically enhanced children at the school, like Violet, will be Gather House’s army.

Violet goes downstairs to visit Otis, who has retired from his Ratcatcher moniker. She asks Otis about his dealings with Batman and what he knows about the Bat’s detective abilities. Otis says that Batman has the GCPD to give him information and offers Violet the service of his rat army to gather information for her.

At a Gotham City art museum a security guard is gunned down by the figure in the body bag that killed the little girl’s parents. The killing is done under the watchful eye of a cowering rat.

Violet is trying to find the link between the killing of the security guard and the girl’s parents. There didn’t seem to be a connection but they were both on a Gotham talk show “Impossible…But True”. Suddenly Violet suffers intense pain and collapses. Her implants need to be worked on, but rather than take the time away from being Mother Panic, she wants painkillers so she can stay on her quest. However, the pain continues to strike her as she struggles to continue.

Violet decides to go on the show “Impossible — But True” and tells some of the story about how her Father was killed. Violet remembers that she shot her Father because he was arranging to have Fredrick Hemsley violate her mentally impaired Mother. Violet doesn’t tell the truth about her Father’s role in the situation. Violet lies and says that her Father tried to protect her from Hemsley and was killed because of it. Now that Hemsley is dead she says that she feels safe enough to tell the story. Until next time…

Breakdown Dead Ahead: Mother Panic continues to build a richer and richer world around Violet. I love that Violet now has an army of informant rats at her disposal. It is a perfect symbol for the troubled and conflicted superhero. Writer Jody Houser is really filling out the character in unique ways and in a short amount of time. There isn’t a whole lot of action in this issue, as it is more world and character building.

The art is by John Paul Leon, colors by Dave Stewart, and letters are by John Workman. The lines are strong and simple with features and body elements hinted at rather than drawn completely. The panel where Violet remembers being hugged by the girl in the hospital is strong, even though we have seen it before. The girl has MP wrapped up in a full body hug and Violet doesn’t have any idea what to do with her oversized-gloved hands. You can feel Violet’s stiffness and fear of real emotion and human contact. Otis isn’t drawn particularly well, his face is a mishmash of what must be a 5 o’clock shadow. The colors have an earth toned palette. There are lots of browns, ochers and clay-greens.

My Take: I am loving what is happening in Mother Panic. Having violet get a literal rat army of informers is so on the nose it made me laugh. I did get a little confused when Violet was getting the implant pain. It was drawn in a way that made me think she was being shot. It took me a few readings to realize that she was just in shooting pain. Not only do I recommend folks start reading this series, I have purchased back issues for some of my friends to get them on board. I’ll ding the score a little because of the confusing art, but don’t be dissuaded, this is a compelling title that many readers would appreciate.

Keep in mind, this is a book for Mature Readers. There is some R rated language and adult topics along with its cover price of $3.99.