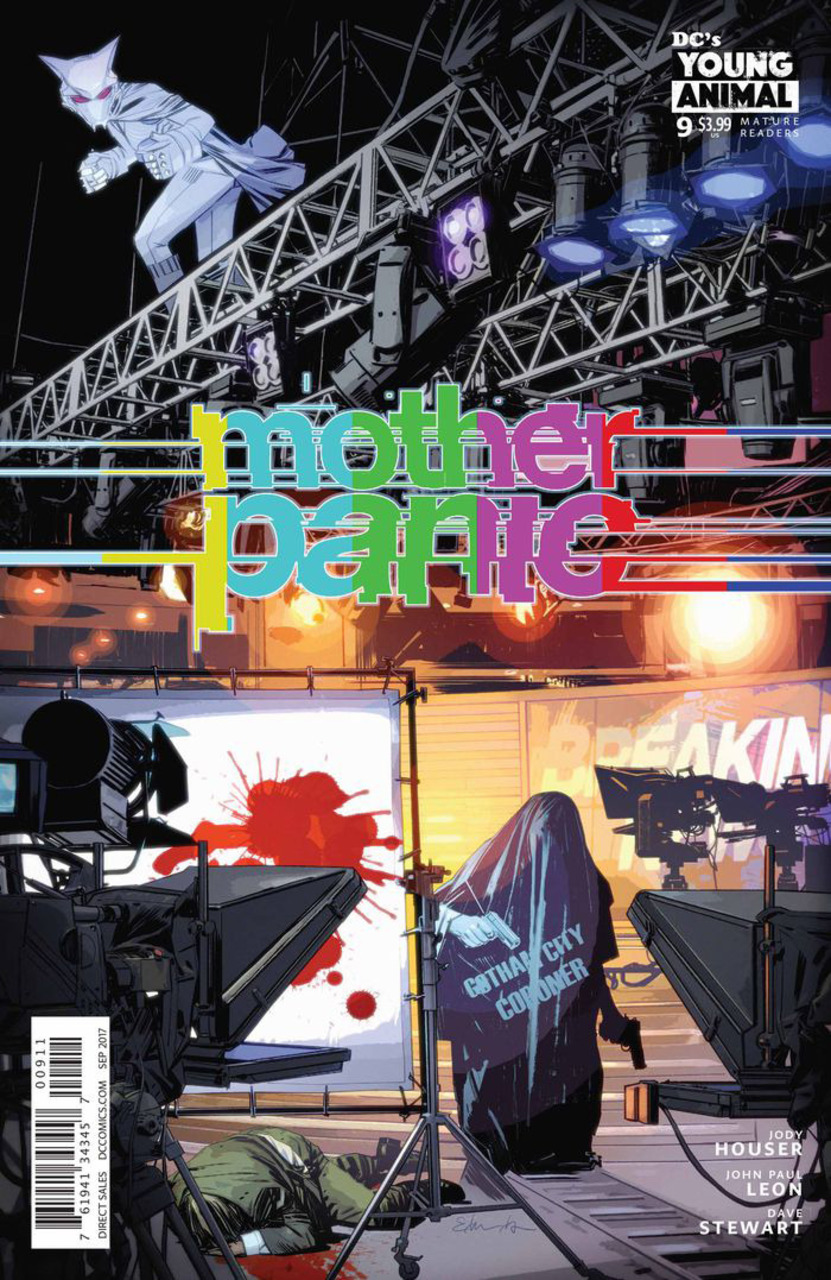 With her superpowers on the fritz Violet uses herself as bait for the Body Bag killer. Can she lure the villain into showing himself? And what can she do about it if he does?

The Plot (spoilers ahead): Violet is spending a night at a disco. She isn’t dancing due to the pain caused by her implant malfunctions. She is offering herself up as bait for the Body Bag killer. She has figured out that all of those killed had been on a certain TV talk show. Violet appeared on the program as well so she expects to be attacked

She remembers back to her time at Gather House. Mother Patrick slapped her when Violet defied her authority and called her “Mother Panic”.

Back at Violet’s home, Dr. Varma is leaving with a suitcase to get some time alone. She is upset because she can’t bear to see Violet, whom she secretly has romantic feelings for, putting herself at risk as Mother Panic.

Violet asks Varma if she leaves, who will perform the surgery on her implants. Violet says that she wants Varma to do it and the Doctor reluctantly agrees.

Violet heads back out to a nightclub and is drinking alone in an ally. The Body Bag killer approaches her with two guns drawn. Violet asks why he is doing this and the killer says that he is trying to make people stronger and wants Violet to overcome her fears. Violet disarms the killer and punches him with barbed brass knuckles. Before she can finally take the killer out however her implants cause her extreme pain and the villain gets his gun and is about to shoot Violet in the head.

Suddenly a Batarang hits the killer in the hand and he drops the gun. Batman descends on the scene and disables the fiend. They unzip the costume and find that the Body Bag killer is Larry Tulloch, someone who worked on the TV Talk show. He was fired for stalking a guest.

Violet asks Batman why he is helping her. Batman says that she is doing good work. As the Caped Crusader leaves with Violet’s quarry, she gives a middle finger to his back.

Violet tells her mother she is going to be gone for a few days, presumably to have her operation. Otis and his rats will look after her.

Violet remembers back to Gather House. After Mother Patrick slapped her she used her super strength to break the nun’s neck. She then burned down Gather House and ignored the cries for help of all those trapped inside. The End.

Breakdown Dead Ahead: Writer Jody Houser both raises and lowers the stakes in this issue, the final in a three issue story arc. We get a lot more information on Violet’s past. The fact that she burned down Gather House and left people, including kids, to die in the blaze shows a vindictive, brutal side to Violet’s personality. Does she feel guilty about this? Does she feel guilt over killing her father? For her selfish, hedonistic lifestyle? It is hard to say, but it could explain her desire to do good. Violet in white is a contrast to Batman in black. Batman does what he does because someone else killed his parents, does Violet wear the cape because she killed her father and those Gather House kids? She and Batman came to the same place through opposite ways. Houser risks our support of Violet with this piece of information, but she continues to break expectations and norms with Violet and it works.

The art is by John Paul Leon, colors by Dave Stewart, and letters by John Workman. This isn’t a colorful book at all, it is full of mostly unsaturated colors: beiges, taupe, grayish blue/violet etc. The flashbacks tend to be in a slightly richer palette, but still more browns and brownish orange – Thanksgiving colors. The colors do match the mood of the story so it works well. The drawing is simple, though Violet’s look changes from place to place, there is never any question about which person in a panel she is.

There are a few places where the art beautifully punctuates the telling of the story. There is a point in the story where Dr. Varma, who is secretly in love with Violet, has had enough of seeing the woman she cares for put herself in danger. There are two panels, one where Violet says “But I want you”, you can see Varma look up hopefully. The next panel has Violet look away and say “I trust you”, Varma looks down, her hopes dashed. It is a wonderful moment.

The way this story ended however was kind of a let down. The Body Bag killer turns out to be an anonymous TV worker that we have no association with. He gets a two panel backstory on the killer. I don’t know why I should care other than to satisfy the little girl who had her parent killed. Also his logic, to kill to make people stronger, is unconvincing. Also, the killer has been in a body bag for three issues, he isn’t visually interesting. Also, Violet didn’t capture the bad guy, Batman is the hero here. Of the three story arcs since Mother Panic began, this is the weakest.

Problems with this story arc notwithstanding we do get solid progress on Violet’s character progression. It is great to see Violet interacting with Batman, he sees her as a hero and respects her. Also, he makes a lighthearted quip about her wearing white instead of his black. It is cute. And the more we learn about Violet’s past the more interesting she becomes.

My Take: I love Mother Panic as a title, but have to say this issue was a let down. I didn’t care much about the killer and while it was fun to see Batman supporting Violet, her heroic ending fell flat. I like the cast of characters that are being assembled around Violet with Dr. Varma, Violet’s Mother, Ratcatcher, etc. Though I think we do need a little more personal life. Right now her biggest problem is getting an operation for her implants. What will happen after that?