My Take on the New DCU 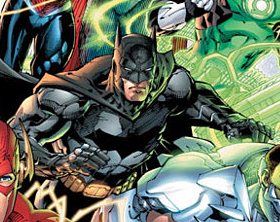 So as much as I wanted to post up a thought about the announcement that DC made the night that it happened, I felt that I needed to let this settle in for a bit before diving into some remarks that may change once thought about. That being said, I have let it settle and now I am at a point where I can talk about this upcoming direction in a reasonable manner.

When I first heard about what DC was planning, I immediately thought that this was a bad idea. How could DC betray fans who have not only poured their money into their products for the last seventy-five years, but also the countless hours getting to know their favorite character inside and out? I participated in a conference call on Skype with members of our site’s staff as well as other fan-sites to discuss this. The biggest problem that we were having with this announcement is the possibility of our favorite characters changing completely or even worse, ceasing to exist. We also discussed the possibility of this being a gimmick as well as a number of other things. Overall, we talked about this for over four hours and at the end we still all felt uneasy as what is to come.

I slept on it and the next day started thinking about this in a different way. DC is a business and as many good stories that they put out, at the end of the day they have to have something to show for it. They are a business and money has to be made. Along that same thought, the number of comic readers over the past twenty years has declined significantly. This is an interesting way to get new readers and the digital announcement also plays into that. I have said from the beginning of DC announcing digital comics that it could work, but it needs to be marketed towards a different audience than the current comic book readers. Digital comics allow the common non-collector to pick up a number of electronic devices and instantly find out more about a character. This can work for those people and can be a bonus for current collectors. Today’s announcement that the prices will be slightly different for the digital copies also appeals as it is something that I believe has hindered the advancement of this form.

So with that thinking, where does that leave us now? Well, I believe one of the main reasons DC is doing this is because some characters that deserve a spotlight haven’t because of past decisions by creators or editorial. This opens up things for creators to do differently without it being an Elseworlds story or something taking place on a different Earth. When Flashpoint #1 was released and we were all shocked by the last page reveal, no one was calling foul because of that. That was probably because we knew that this was in an alternate universe, but the possibility of characters changing was something that makes things fresh and exciting.

As for the important matter, the Bat-books. How will this affect them? Well, my take on it is very little. Batman has been the bread and butter for DC for a long time, and I don’t see them changing a whole lot. They may get rid of a character here or there, change continuity a bit, but for the most part I think that the Bat-books have been solid and everyone knows it. The creators will change and we will probably see some fresh sets of eyes on the new lines that will release in September. It was announced today that Gail Simone and Tony Daniel will be working on other books, non-Batman related. Now that doesn’t mean that they can’t work on a Bat-book also, but I think shaking up the creative teams is good for everyone. We can pick things apart in certain issues, but we also know that bringing someone new on the books and giving them a chance works too (Scott Snyder?).

Will we see major changes happen in the Bat-books? We may. We may go back to there being only one Batman and Bruce Wayne goes back to being a billionaire playboy who has no public connection to Batman. Dick Grayson may return to being Nightwing, but probably not Robin. A lot of the supporting cast of the Bat-family has a large enough following that doing things like making Barbara Gordon Batgirl again may be a little extreme. But time will tell.

What we do know is that it is only about eleven more days until all is revealed as far as the series and creators attached. June 13 marks the day solicitations are released and we know that enough information will be made available for retailers to at least be able to figure out how many issues to order.

I am going to give it all a chance and we will still be covering all of these new series on the comic podcast. So for now Bat-fans, have faith. Things may seem dark and dreary right now, but DC clearly still has some tricks up their sleeves.