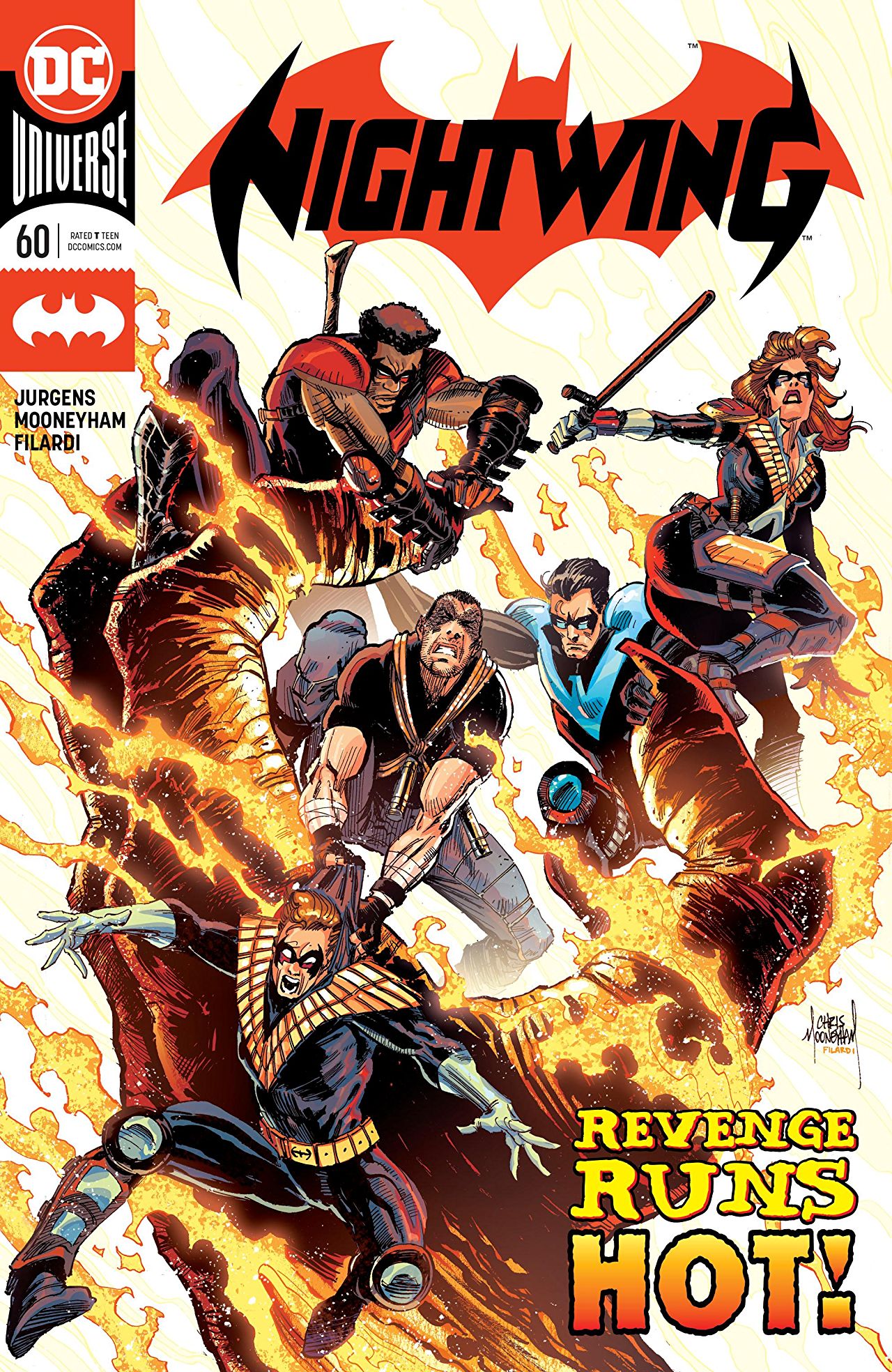 Overview: Ric Grayson and the Nightwings (my new band name) investigate an elemental arsonist that is targeting cops.

Synopsis (spoilers ahead): Dropped right in the middle of an enormous fire, Ric is pulled back into vigilantism to help the Nightwings get people to safety after a strange fire elemental-like creature causes the catastrophe. Our team does quick work to do their job both as cops as well as their other job as vigilantes at the same time. Working like a proper tactical team, they break into teams, with some of them dealing with the elemental, trying to understand if it’s a mindless monster or doing this maliciously. The other team works to protect innocents trapped in the fire getting them to safety. Quick thinking from their leader uses a firehose to scare off the elemental and get everyone out safe.

After convening on the roof of an unburnt building, Ric agrees to keep helping the Nightwings when they need it and returns home to get some smooches with his girlfriend. She’s trusting his judgment, but acting like a reasonable person and worried Ric might be pushing himself into a dangerous situation. Meanwhile, the others begin to put the pieces together that the mastermind behind it all could be Melissa Stapleton, who the last issue wanted all cops to burn. Not something you’d forget after something like this.

Before we can investigate Melissa though, we get to learn just why she hates cops. Though we could infer this from the previous issue, it’s nice to get the exact details of the situation. Her father was giving a new cadet a drive around, showing him around on patrols, and got caught in the wrong end of a bullet. Reasonably angry that his death could have been avoided if he had a more experienced partner watching his back, she swears hatred against all cops.

As we leave memory lane, the Nightwings catch Melissa in the parking lot to question her, bringing up her hate and the very distinct threat she made. Melissa denies the claims, but before this red herring can be milked, the fire elemental suddenly appears, attacking the Nightwings and offering to help her with something.

Analysis: As I read this comic a second time, in preparation for my review, I had some questions about what the point of this issue was. I mean, I do really enjoy this story unlike a lot of people, but regarding the Nightwings, what purpose do they serve? Typically, vigilantism comes about because people can’t use the means of the law to deal with their problems. Either from someone who can’t use the law, or the law isn’t willing to help them. But the Nightwings are mostly composed of cops. Cops that still basically act like cops while wearing their masks. Nothing these people do this issue couldn’t be done by cops that were on the scene either. The only difference is that the Nightwings seem to be masters of parkour, which is something that could easily be taught to other cops as well.

Ignoring that existential question, this comic is really well written. The comic is paced healthily, blending six distinct plot points into one another, without feeling rushed or obvious. You get everything with this: Intelligent fight scenes against a creative enemy, somber character reflection, dramatic backstory reveals, and a cliffhanger making you want more. It never overstays its welcome and every page feels like a distinct progression of the story. Nothing feels like its lingering or padding the runtime.

Something I absolutely love about the Nightwings is the love the story has for Nightwing’s history. Each of the Nightwings sport one of Dick’s various costumes throughout his history, and they even make his New 52 red costume look really cool, which is a surprise because I really didn’t care for the look when it was revealed.

Final Thoughts: In the current age of nebulous trade-fillers and spectacles that barely tell the barest of plot lines, Jurgens manages to tell an actual comic book plot in a single issue, just like the good old days.