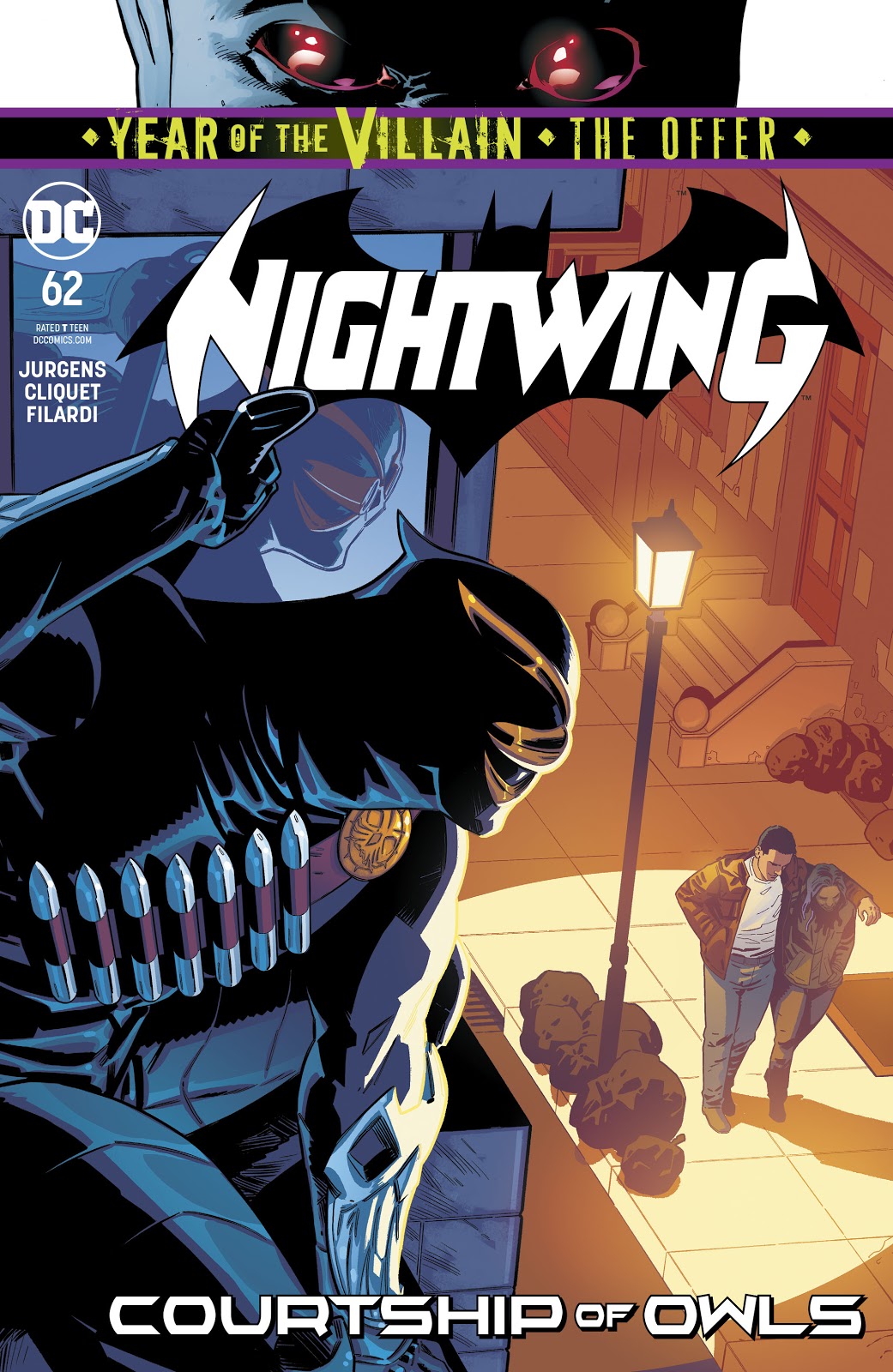 Overview: A decent story is buried under a mountain of repetitive narration.

Synopsis (spoilers ahead): The story begins with a brief synopsis of Dick Grayson’s past and everything that lead up to him starting this new life of his. As I’ll explain later, not only is this narration pointless because the people reading this will already know whats going on, it’s pointless because the story repeats all this all over again later on.

Ric is currently chasing after a thief who had stolen a kidney from an ambulance. After successfully recovering the kidney (and continuing to narrate about his life as Robin even though he doesn’t know anything about said life), he runs back to the hospital and gives the kidney to Nightwing Red. It isn’t explicitly said (one of the only things that were NOT told directly to out faces in this book), but the kidney is probably for Zak, the member of the team that was injured in last month’s issue. Ric then runs off to go be with his girlfriend, deciding that now is the proper time to tell her his secret identity. Oh, and did I mention that throughout this issue Ric has been tailed by some drone trying to figure out his identity.

He tells his girlfriend everything he knows about himself, which is what I meant earlier about the previous exposition being repetitive. Ric goes over every important detail as he explains everything to her. She takes it all without a fuss or any real complaint. You could say that she was written to have no real personality or point of interest in this matter. Ric even goes over why he is still doing this vigilante stuff even though he refuses to go back to the old life, something that hasn’t actually been brought up in a while.

Well, afterward, the rest of the Nightwings hold an impromptu meeting in the hospital Zak is staying at and discuss their newest member. Sapienza thinks Ric might be an ex-criminal who’s walking the straight and narrow, but Zak swears he’s always been a good person. Hutch is just concerned with keeping him on the team since he makes the team that much better for it.

The next day, Ric thinks back to his old forgotten life for the third time, only for this time to actually matter as it sets up for Ric admitting that he is happy in his new life with his girlfriend. He gets out of bed, monologuing to himself when his girlfriend makes a joke about his Robin-days. The conversation fading as we learn the identity of Ric’s stalker is Talon, who is being given aid by Lex Luthor to accomplish whatever he may desire.

Analysis: This is not actually that bad as a filler issue. It’s clearly being used as set up to introduce new readers to the story who are coming in because of “Year of the Villain”. However, the issue is so worried about bringing in new readers, it oversells its premise. The first page goes over Dick’s life before all this in four panels alone but accompanies those panels with meaningless narration that just waxes poetically. The next five pages are actually a really thrilling chase sequence held together by Ronan Cliquet’s artwork. The dialogue and sequential art are serviceable enough that nothing else is really needed. But Dick’s narrations never stop.

As I mentioned in the synopsis section, these narrations aren’t even needed. Everything is gone over later on in the story, and as annoying as it is that every issue has been repeating this same synopsis of his backstory, this is the first time it’s actually been important. Not only is Ric actually explaining it to someone diegetically, but he’s also presenting it with new information. Not only is he thinking about the past, but also the present. I honestly think that if the first six pages of this comic had all of its narration removed, this would be a GREAT issue, worth recommending to get people into this story. As it is now, I can only give it a medium grade. I actually thought this issue was another bad issue when I first read it because I was so blindsided by the incessant use of narration.

Talon being revealed as the antagonist of this series is going to be interesting. The story has been walking in circles for so long that having an actual threat challenge Ric is a breath of fresh air. I look forward to next month’s issue.

Final Thoughts: This is an actually good issue that would have done an AMAZING job at bringing in new readers if it didn’t waste a fourth of its wasting time with so much pointless narration.