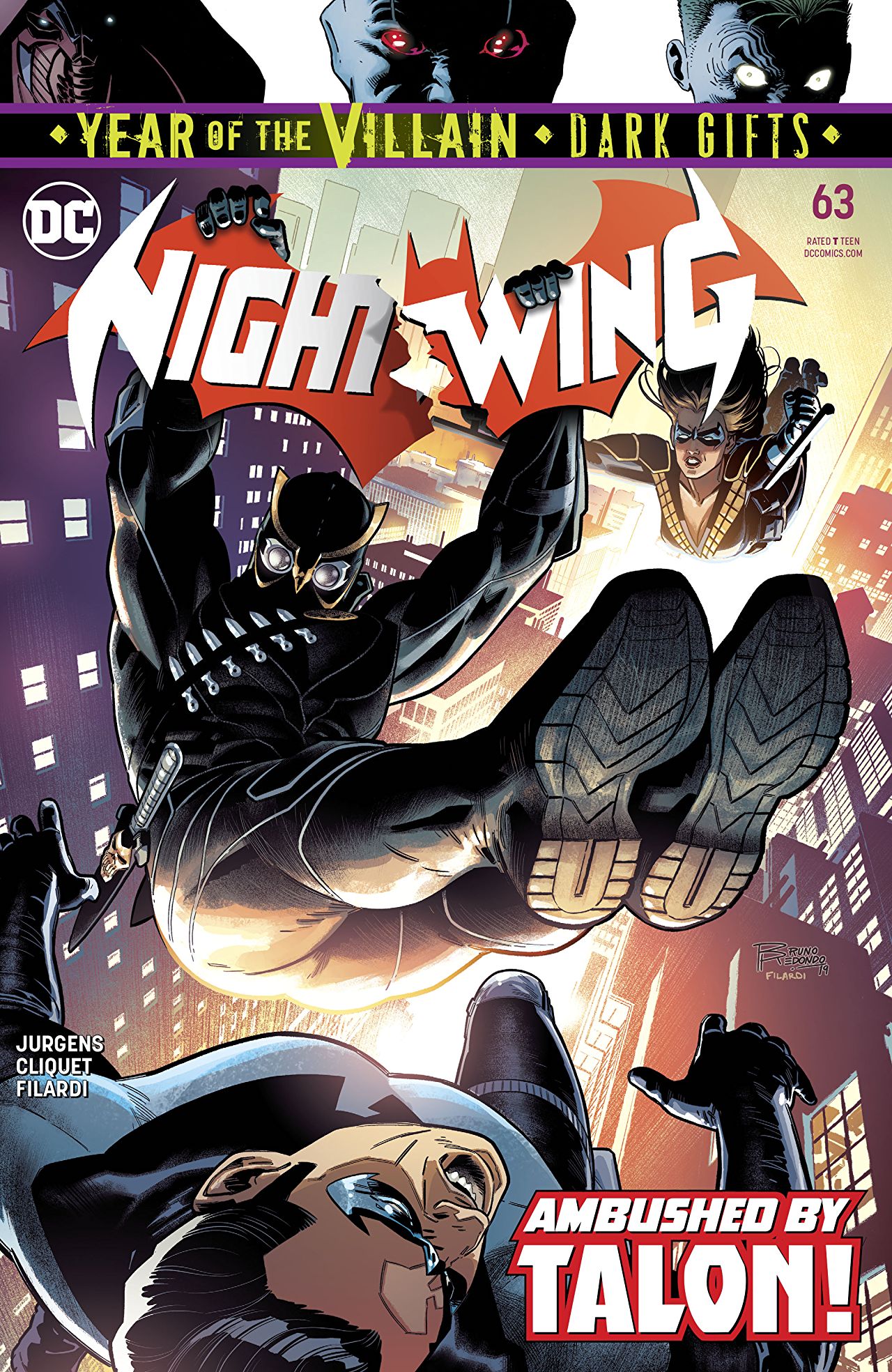 Overview: Ric gets some unwanted advances by a flirtatious villain.

Synopsis (spoilers ahead): The story opens up with an art heist being interrupted by Ric Grayson and Nightwing Blue (otherwise known as Zak). The exposition tells us that a series of blackouts have been happening across Bludhaven for a few days now and people are taking advantage of it all. Ric leads the operation even though Zak technically has more experience (as far as the characters are aware of), but Zak definitely steals the show by sniping a bullet into a runaway car tire with a pistol. The comic establishes that Zak and Ric have developed a rapport with one another and get along on and off the battlefield. This isn’t out of left field either. During the Fire Elemental plot, Ric and Zak demonstrated good teamwork and synergy after only a few moments together and Ric was the one to recover the organ transplant needed to save Zak after a car crash. So it makes sense that Ric would have a closeness with Zak.

After rounding up the art thieves, Ric returns to his day job as a taxi driver, where he runs into William Cobb, masquerading as a historical researcher. The two exchange words about the blackout and how it may interfere with Cobb’s work before Ric lets him out and drives off to crash at his girlfriend’s bar. Makes sense that he would be exhausted, considering he just finished an art heist and immediately jumped into taxi-cabbing. At least he’s no Batman and doing weeks of work without any naptime. No time to wait though, as no sooner as he wakes up and makes pleasantries with his girlfriend Bea then another blackout happens, forcing Ric back into the field to help out the Wings deal with the violent insurgency.

Ric deals with some small thugs doing a burglary (and engaging in criminal rehabilitation) while the rest of the Wings get busy with the city as a whole, only for Zak to get taken out from behind by our mysterious Talon from the last issue. Talon calls Zak a “Fraud” and brutally defeats him, stabbing him in choice locations and leaves him a bloody mess. By the time Ric and the Wings can get over to Zak, he’s barely breathing. He only has enough energy to namedrop his assailant, just as William Cobb makes his way into Bea’s bar, ending the story on a cliffhanger.

Analysis: As much as people don’t like this series, if you ignore the millionth time Ric exposits about how he has amnesia (its not even that bad in this issue as it is one page and its interlocked with some decent dialogue and the exposition is in relation to something), this story is actually pretty good. Ever since the Year of the Villain picked up, the quality of the writing has skyrocketed considering the past four issues are any precedent. The action in this story is nice and dynamic and the pacing is wonderful.

A weaker story would assume the readers automatically know who Talon is, or worse, think it needs William to outright say that he’s Talon. Instead, it uses dynamic lighting to make it very clear that William is a bad guy, flashing a knife just out of view. And while it’s definitely hokey and trite, I thought it was definitely very intimidating. As I mentioned in the synopsis, the story has long since established a relationship between Zak and Ric, even if it’s small, and he’s certainly stolen the scene whenever he’s around. From hotwiring a car and driving it into a fire hydrant at top speed to gangsta-shooting a pistol in order to snipe a spinning car tire in what looks like a 360 no-scope shot, Zak has certainly been showing himself to be the most flashy and impressive of the Wings. If any of these characters get absorbed into the Nightwing mythos, I certainly hope Zak lives long enough to join that roster.

But this rapport Zak has been developing with Ric this issue is very clearly set up to make us care that much more strongly when Talon is utterly destroying him, stabbing every part of his body and leaving him a bleeding sack of meat by the end. It not only makes us empathize with Ric getting invested in this threat, but also makes us immediately fear for Bea’s safety when he shows us at the end of the story. A fantastic structure that does everything a story like this needs to do.

Final Thoughts: A lot of people have signed off this series, but I hope people will be willing to give it a chance because as far as things look, things are only getting better.