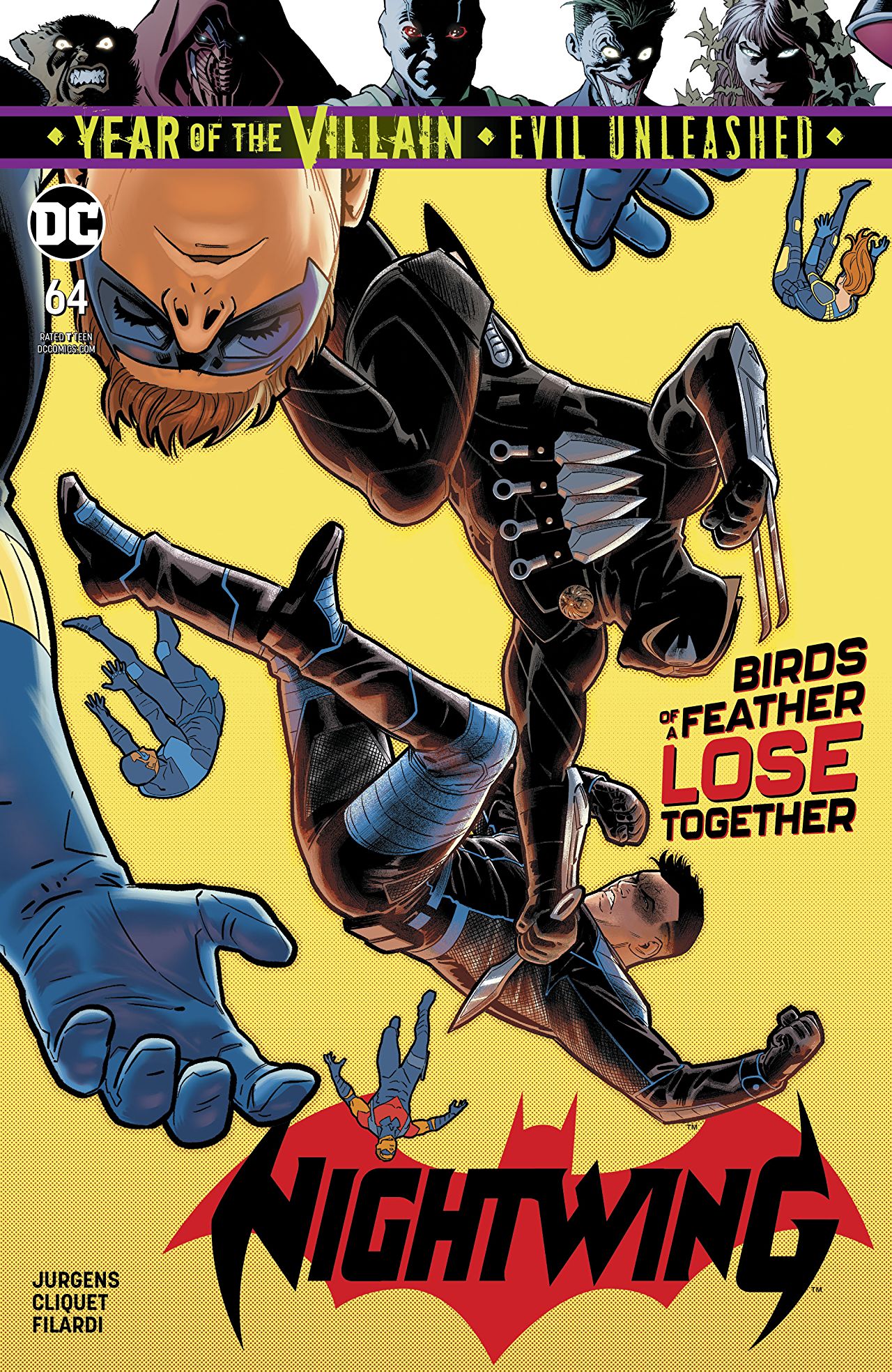 Overview: Talon begins to make his move, while Grayson tried to save everyone he likes (and that’s not very many people).

Synopsis (spoilers ahead): Our story begins where the last issue left us with Cobb chatting with Bea and looking really menacing at that. She begins to close up shop and Cobb starts getting dangerous when suddenly looters attack the shop. Bea is in real danger when Cobb changes into Talon and kills them all. How Cobb managed to change into that entire costume in the blink of an eye, I’ll never know. He claims to be Ric’s only true family and that everyone else, even the Bats from before, are false. He takes Bea with him and runs off.

Meanwhile, Ric is hurrying Zak to the hospital, getting a doctor to see him right away. He should be alright since this is a comic book, but Zak’s sister Colleen, the other Nightwing, is done. She wants to quit and take Zak away from Bludhaven when this is over since this is the third time he’s been put into the hospital (I mean, considering the last time it was his own stupid choices, I’m not sure you can blame Bludhaven for this). As they manage to calm down Colleen, Ric gets a phone call from Talon, with Bea on the line. He’s challenging Ric which makes Ric runs blindly towards his destination. He hitches a ride on a firetruck, outpacing all the other Nightwings as they try to catch up.

The firetruck gets run off the road by looters and it looks like the end for Ric as he gets jumped, but the guy Hercules-es his way through them all, powering through the thugs and making it onto the rooftop to find Bea. She warns him that Talon is here and he knows who Ric is, and then he rises, calling Ric “son”.

Analysis: While not as exciting as the previous issue, this one certainly ups the adrenaline rush. Every scene in this comic feels like it’s moving at breakneck speed compared to everything else going on. The comic doesn’t even have the time to tell us about Ric’s amnesia until the last few pages. Cobb continues to be a much more engaging antagonist than a lot of the past enemies, which is exacerbated by just how intense this story is as a whole. Sadly much of the other characters fall back to give the story the speed it needs to operate at. Colleen’s crisis over saving the city feels kinda halfhearted considering the story isn’t really shown to be nearly as bad as Gotham or other places. In fact, it seems like a perfectly normal place with the occasional hiccup until just now. Plus like I said before, a lot of the injuries Zak’s had are kinda his own fault.

Ric is also kinda presented at his most superhuman. Diving on a high-speed firetruck, getting thrown off it into a dumpster and then powering through a dozen thugs without a pause in his step. If the story really wants me to believe Ric is a different person than Dick, then maybe he shouldn’t be doing everything his former self could do. “Muscle memory” doesn’t cover smashing into a metal box at the speed of an emergency vehicle. Talon’s plan doesn’t seem as complex or laid out as it first seemed. Did he really need Lex Luthor’s help to do all this? It seems like this is something any assassin could have done. I was expecting a much bigger conspiracy to happen as Cobb took out each and every one of Ric’s friends and family before finally acting on him. But who knows, maybe that was his plan, but the looters that attacked Bea forced him to accelerate his hand.

Regardless, this is all small nitpicks. The issue itself is definitely solid. The comic overall is going in a positive direction.

Final Thoughts: Good read. Not as good as the last issue, but miles better than the past few.