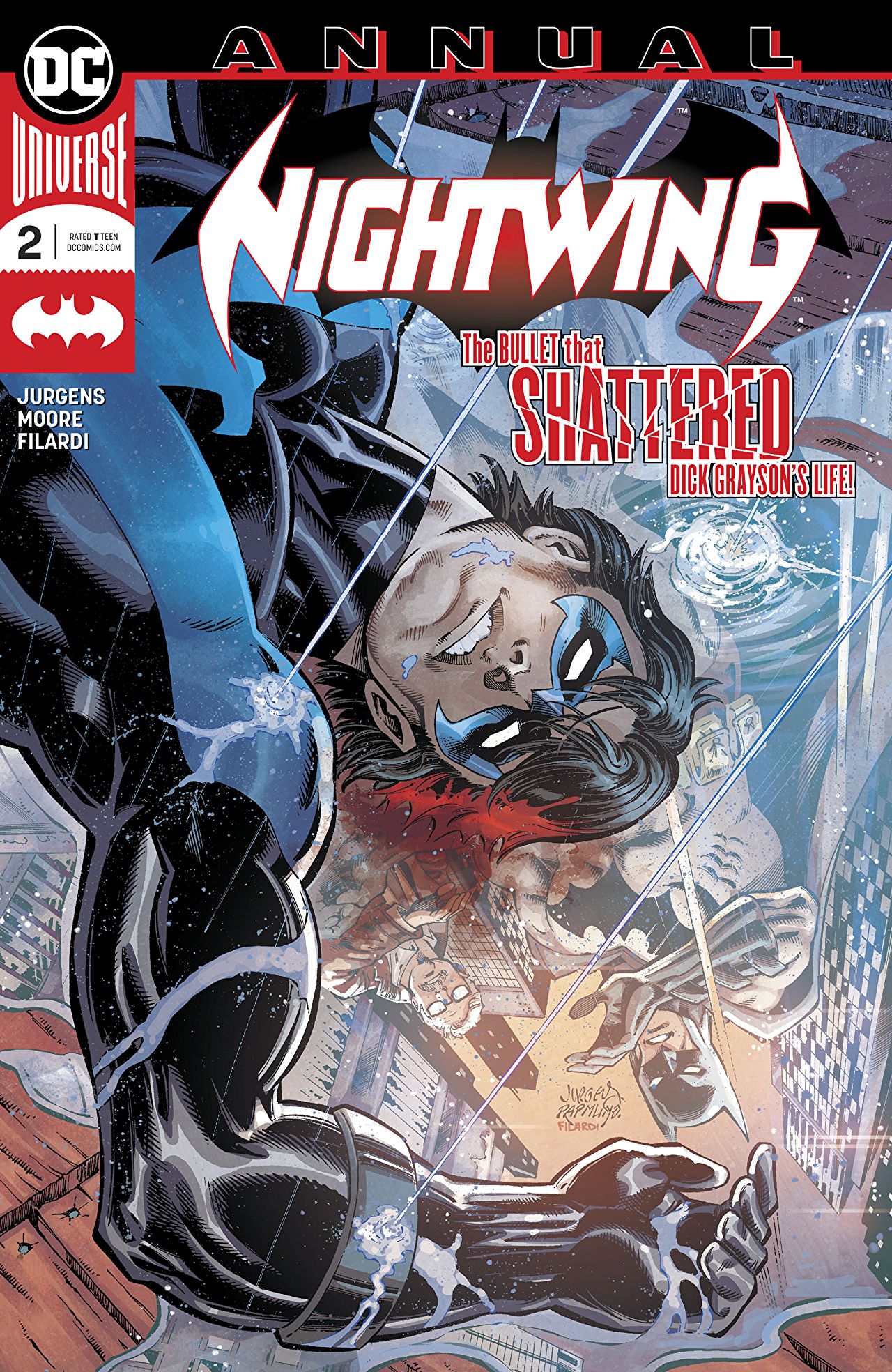 Overview: We do down memory lane to learn just what happened after Dick was shot in the pages of Batman #55.

Synopsis (spoilers ahead): A lot of this comic is broken up into fractured dream-like scenes where the past and present are woven with two parallel stories happening side-by-side, with additional flashbacks within flashbacks happening at the same time.

The majority of the comic is told from Ric’s point of view as he recovers from the operation that saved his life. We flashback to Ric remembering being with his parents as a little kid, swinging on the trapeze with his mother and father in the circus. We then move to Ric’s most recent memory, when he woke up after his coma. We see Damian perched over Dick’s bed, demanding Ric wake up, though Ric is only coming to and can barely remember it. The doctor tries to help him form a coherent identity now that much of his life is suddenly gone, by having him latch onto what he does remember. They focus on a special time during Thanksgiving when he was with his parents in Bludhaven. Ric was expecting another meal in a hotel but his father introduces him to some old relatives living in Bludhaven who are inviting them over for dinner.

Ric can’t sit still though as we go down memory lane, as he keeps wracking his brain over why he was shot that night, and how there’s one person whose voice he remembers but can’t place. The doctor tries to remind him of Bruce Wayne and what their relationship was like, bringing up the sorry state Bruce was in throughout the operation.

We then flashback in time to the early stages of the operations, Ric was on life support and Barbara, Alfred, Bruce, and Damian are waiting on him. Bruce has flown in the best neurosurgeon they could find and flown her to Gotham from Switzerland (the doctor we’ve been talking to). She gives it straight to the family, warning them about the seriousness of his injuries and how its a miracle alone that he’s alive. She changes Ric’s medication and he eventually wakes up, but sadly we all know how this song and dance goes by now: Ric doesn’t know who any of them are.

Bruce tries to talk to Ric in private, thinking its all a charade, but it goes nowhere. Bruce gets livid and helpless over it all. He leaves and we see Ric being left alone with the doctors to oversee his recovery, and at this point, we return the “present”, or the most recent point in time in the story. The doctor manages to convince Ric to see Bruce and convinces Bruce to take Ric back home, hoping it would jog old memories. But the entire experience seems to push him away. The house feels like a tomb to him and he keeps feeling like he’s being pushed away.

We flash back again to that fateful Thanksgiving dinner the Grayson family had with their relatives. Great Aunt Judith sends Richard out to play with their now grown-up daughter’s toyhouse while the adults clean up, the parents worry about how hard it is to have stability when you travel so much for work. Great Aunt Judith finds him looking at a picture book called “The Very Friendly Owl” (also the name of this issue) and encourages him to give it a read so that he might develop a fascination with owls. (put a pin in that for later).

Ric is still uncomfortable about his visit to the manor and we learn why. The gang decides to invite Ric into the Batcave, hoping the experience and the costumes will jog Ric’s memory. Unfortunately, all it does is show him the blood-covered uniform he wore when he was shot, as well as a video recording of that day. The experience drives Ric angry and he pushes them all away, blaming his time as Nightwing for his injuries in the first place. He runs from the manor into the doctor’s arms and she leads him back to the hospital.

The doctor ultimately gives Ric the full recovery, but staying in Gotham is causing too many problems for Ric.

Flashback to the end of the Thanksgiving dinner, little Ric is saying goodbye to his Great Aunt and Uncle, not wanting to leave. They comfort him saying the circus will be back in town next year. It is then revealed, as the family rides away, that the Aunt and Uncle are working for the Court of Owls and that this is some long-term plan to indoctrinate Dick Grayson.

In the present day, the doctor encourages Ric to leave Gotham and go to Bludhaven, giving him the same book he read at his relatives’ place. She says she’ll cover for him as Wayne tries to look for him, helping him sneak out of the hospital, and then when Ric is gone, reveals that she too is working for the Court of Owls. And that she’s been securely medicating and manipulating Ric to become a fresh, pile of clay for the Court of Owls to mold into what they please.

Analysis: This was a really well written comic. Regardless of the content and the narrative choices, I can’t say anything without praising the comic for just being an incredibly well written comic. Budding writers should definitely look to this comic for inspiration on how to write a comic. The pacing is excellent, it properly tackles four different stories happening at different times, all jumbled together, the plot twists are properly set up much earlier in the story that is first assumed. The children’s book on owls was an obvious tease of the twist, but even before that, the medication and tests the doctor put Ric through, reading the story over a second time, these are the attempts the doctor was doing to medicate Ric and make him easier to manipulate.

Now, there’s the big elephant in the room that people have been asking since Ric became, well, Ric and that’s why hasn’t Bruce just asked Zatanna to fix this problem. Zatanna has lobotomized Dr. Light, erased Bruce’s memory, and set up shields inside Selina’s mind from interrogation. Zatanna is more than capable of solving a problem like this, and she is never once brought up. Honestly, I’ve been on board with this story-arc a lot more openly than a lot of people have been, and even I really can’t get over how NO ONE thought to bring Zatanna in on this. Maybe she’s busy. Maybe there’s something going on with Justice League Dark and I’m just not in the know to say on this, but it’s still really bothering me.

Outside of that big plot hole, this story is just, again, really well written. Bruce is acting a little stupid by not bothering to clean up the blood-covered suit and thinking it was a smart idea to show Nightwing getting murdered, but Damian was written perfectly. His relationship with Dick is perfectly maintained, and for all those wondering, yes, Damian is actually drawn like a person of mixed blood. His skin is actively darker than everyone else’s and his lips are thicker, even in more abstract ensemble shots. Travis Moore and Nick Filardi do a FANTASTIC job all around; the environments are amazing, the panel layout is expertly planned out. There’s a distinct style a color set up for each of the time periods so it’s easy to follow the events as they unfold. The only complaints I can make about this story are the plot holes, but those are more a fault of the editors, not anyone directly involved in this specific issue.

Final Thoughts: An amazingly well written and drawn comic. Honestly, this is a highly recommended comic in my opinion; definitely pick it up if you can.