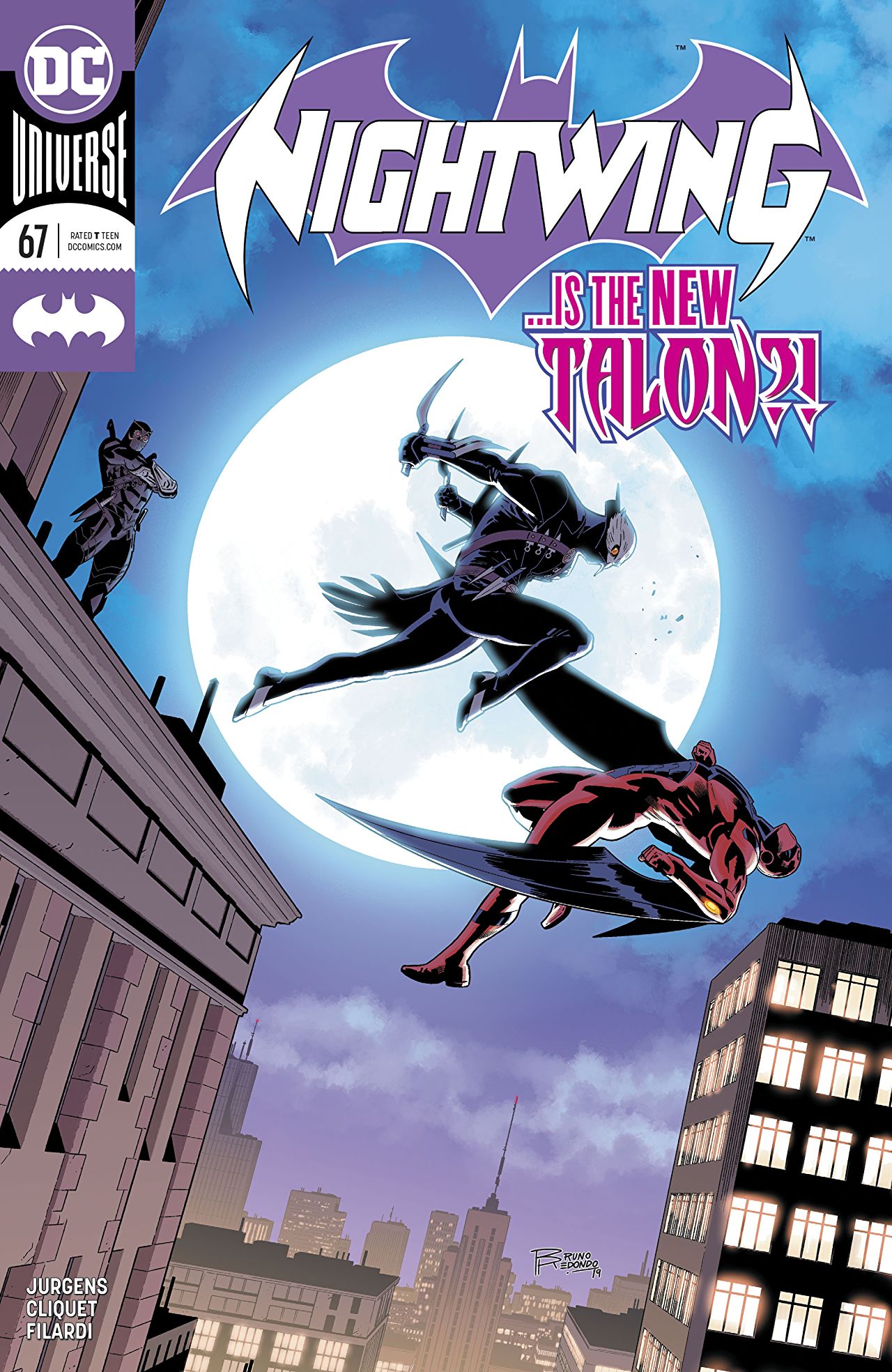 Overview: Dick, now Ric, now Talon, is going on a murder spree and no one can stop him.

Synopsis (spoilers ahead): Right where we left off the last issue, Dick, now indoctrinated by Talon into being another hitman for the Court of Owls, has descended upon his fellow Nightwings and sentenced them to die. He systematically takes them all out one by one, forcing Nightwing Blue to pull a gun on him. It’s not effective and it looks like Dick is about to kill all of them.

Suddenly, up in the sky. Is it a bird? A plane? No, it’s… some guy named Condor Red, and he’s apparently doing surveillance over Bludhaven because of the weird DOOM symbol over the sky. He’s most likely a tie-in character to the event comics happening at the same time, but by all accounts, he’s an absolute nobody. He witnesses Talon about to kill a few other costumed vigilantes and dives in to stop him.

Condor’s commanding officers order him to stand down, but he refuses and engages Dick-Talon with aerial efficiency. Picking him up, flying him out of the city, and then dropping him off the side of a giant bridge. He is then taken aback by Dick-Talon’s reflexes saving him from the fall, which implies Condor was trying to kill him with that drop. Condor’s bosses repeatedly tell him to disengage and resume surveillance, but he is stubborn and won’t listen. A fight breaks out that looks like they are evenly matched.

Back at Team Nightwing, Bea gives first aid to those with nasty injuries but says they need to go to a doctor. They all look at the Doom symbol in the sky and wonder aloud about it, but comment that it’s above their pay grade. Beau then goes after Dick-Talon, with Nightwing Red coming along to give her protection.

We return to the fight between Condor Red and Dick-Talon, with Dick-Talon appearing to get the upper hand on his opponent. A quick-thrown dagger pierces Condor’s wing, forcing him to descend, and fight Dick-Talon on even ground, which leaves him open to a dagger-reinforced kick that pierces his power-armor. Following up on the first hit, Dick-Talon stabs deep into the cracks he’s made with a huge knife, plunging it deep into Condor. He begins picking away at Condor’s armor, tearing off his mask and forcing the man to beg for his life.

Cobb-Talon begins goading Dick-Talon to finish him off. Condor pleads, saying he has a family. And Dick-Talon’s dagger stops inches away from Condor’s head. Dick-Talon gets up, not even acknowledging Condor’s questions about why, and just takes off his mask. He smiles into the sunrise as the comic comes to an end.

Analysis: My feelings on this comic are mixed, so I’ll first go over what the comic was trying to do, and then explain why it failed.

First, the way Dick systematically takes down the entire Team Nightwing with ease is a good way of showing just how much better Dick was compared to them and how he was more or less holding back the entire time. It’s a great context clue and makes the attack feel weighty.

Second, the inclusion of Condor Red, while flawed (I’ll get into that next), makes some logical sense. His role is to act as someone Dick genuine doesn’t know or care about personally. He’s an absolute nobody. So it would make perfect sense for Dick-Talon to murder him. There are no memories of him to cloud Dick’s judgment. He’s just an opponent and one that has repeatedly tried to kill him. Seeing Dick spare his life, and seemingly return to normal as a result, is meant to show just how inherently good Dick is. That all life is important to him and that any normal person is going to trigger his heroic reflexes, even if they tried to kill him.

The problem with Condor Red is that the comic spends way too much time on his fight with Dick. It’s a decently choreographed fight. Lots of ups and downs that lead to a climactic conclusion. But the story ultimately revolves around Dick fighting someone the audience knows nothing about. I tried googling the character to see if maybe he even had a wiki entry and while there are several “Condor” characters in DC, none of them fit his profile, which tells me ZERO readers would know about him. As a result of this confusion, the reader is just with a shallow fight. If the character had been a B-plot going on in the back ends of the comic. A character who encountered Dick, but we got to learn about as we read Dick’s story, we would have felt more invested in Condor’s life outside of basic human decency.

Instead, the story should have devoted more time to Team Nightwing and Cobb. Gave us the Dick/Condor fight between scenes of them discussing Dick’s morality. Drive home Dick’s inherent goodness by having the team recount everything they did with him. The heroic moments he showed off.

But instead, the story gives us a pretty decent fight, with an on-paper decent ending. But an ending that leaves sour grapes in this reviewer’s heart.

Final Thoughts: More or less a decent story, but it could have been way better.