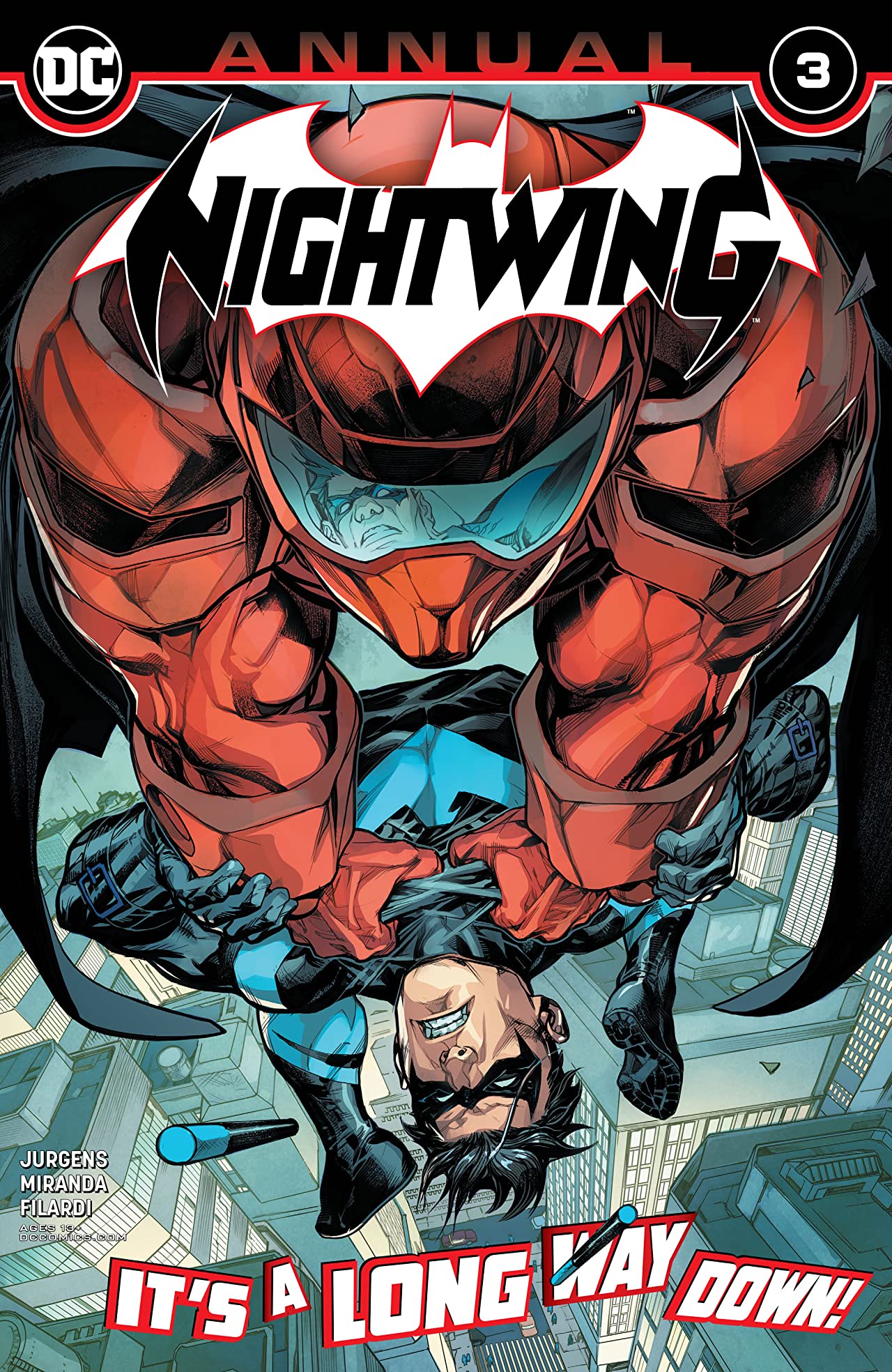 Overview: In this annual, we learn about the Condor Program and how they, along with everyone else it seems, have plans for the future of Nightwing.

Synopsis (spoilers ahead): This issue takes place after the events of Nightwing #68. It starts with the fight with Dick Grayson, the brainwashed Talon, and the mysterious eye in the sky – Red Condor. The perspective is from the monitors of a base in Montana. Four women in catsuit uniforms are viewing the footage of the fight, trying to ascertain the identity of the Talon. Ms. Hale wants to recruit this Talon into their organization despite the others believing that he is a killer.

Eighteen months earlier, Dick Grayson takes to the skies as Nightwing in Blüdhaven. He is responding to a group of armed people on the steps of a government building. This army fires on Nightwing. They tell him that they are the Blood Knights of Blood Haven, and they are going to own the city. Nightwing corrects their pronunciation and calls them the Blüd Knights of Blüdhaven.

We see that this exchange is being watched by Blockbuster. Blockbuster orders the Knights to kill Nightwing. One throws a gas canister at Dick. The area fills with gas that chokes Dick. The Knights are not affected by the gas since they are wearing air-tight armor including helmets.

Above, we see Condor Red in the skies. He wants to steps in or else Nightwing will die. Ms. Hale orders Condor to stand down, but he insists that the Condors are there to make life safer. If Nightwing dies, it will be on her head.

Condor swoops in as Nightwing falls, and the Knights assume that he is Robin, due to his red armor and wings. Condor identifies himself as Condor Red. The Knights fire on him to no avail, as Condor is bulletproof. Nightwing immediately attacks Condor. Nightwing grabs Condor’s ankle as he tries to fly off and climbs onto his back to force him down. Condor throws Dick off as a knight rises to take aim. Condor fires on the knight as Dick falls into him. Condor discovers that Dick is still breathing and scans him, so the crew in Montana can check Dick’s vitals. His blood pressure is down, and his pulse is declining. Ms. Hale asks for a blood sample, and Condor wipes the blood off of Dick’s nose. The blood is analyzed, and Ms. Hale discovers that Nightwing has been poisoned. She orders Condor to bring Nightwing to Montana.

At the compound, Nightwing is on a table. The toxin used against him has been identified, and the treatment has started. Nightwing revives and asks where is he. Ms. Hale tells him that they are in Montana and that her team saved his life. Ms. Hale identifies herself as Jacqueline Hale, the owner and founder of the Condors, and introduces Condor Red. They are in the monitoring business. Ms. Hale takes Nightwing on a tour of the compound. Dick wants to return to Blüdhaven, but Hale insists that he has not fully recovered.

On the tour, she talks about information becoming the most important commodity. The Condors document, catalog, and evaluate anything that is required. Hale reveals that she wants Dick to join the Condors. He immediately says no, and from the interaction and the art it looks like Hale is attracted to Nightwing. She puts her hand on his abs saying that with his suit, he is not packing oxygen. Hale looks at her watch and says that there is gunfire breaking out in Blüdhaven. Dick admits that he is a bit wobbly. Hale pats Dick’s butt and says that if he wears the armor, he will be better protected and effective. Dick says that she violated his personal space, and Hale responds by noting that it’s about time he noticed.

In Blüdhaven, three crime bosses are running in an alley and are frantically knocking on a door asking for Petey to let them in. We see that it is the Knights, and they level their weapons at the three as a figure in blue armor, very much resembling Nightwing, swoops in on wings with Condor Red at his heels, knocking out the Knights. The bosses draw their guns and fire on Nightwing. While Nightwing takes care of the bosses, the Knights revive, and Condor Red engages them. A knight throws a gas canister, and it detonates in front of Nightwing to no effect. He punches the knight, and Blockbuster arrives and attacks Condor Red. Nightwing is told that he has a .44 caliber firearm in his forearm compartment and that he should use it on Blockbuster. Dick refuses. Blockbuster grabs Nightwing’s leg and throws him into a wall. Hale tells him that they have given everything he needs. All Dick needs is experience. He grabs a gas canister off of a fallen knight just as Blockbuster grabs his neck. Dick shoves the canister into Blockbuster’s face. Dick does appreciate having the gear this time to face Blockbuster, but he will not join the Condors. He wants to do things his way.

In the present, Hale and the three other women are looking at the monitors. The Talon is confirmed to be Nightwing. They will monitor him and stay on his good side because one day, he might be theirs.

Analysis: This was an okay story. Most of the issue was fighting, but we do get a little character exploration of Dick Grayson that might explain why he was able to defeat the Owl’s programming. We see that Dick does like to work alone, and he wants to rely on himself more than gadgets, which is why he does not use a utility belt like Batman. It also looks like Nightwing has another admirer to add to the list.

The art here is good. I like the more realistic style. I do believe that the butt shots of Dick were overdone a bit for my taste. However, given that we usually see it with female characters, there is a little bit of fair play here.

Final Thoughts: As a one-shot issue, this was enjoyable but probably not very memorable.