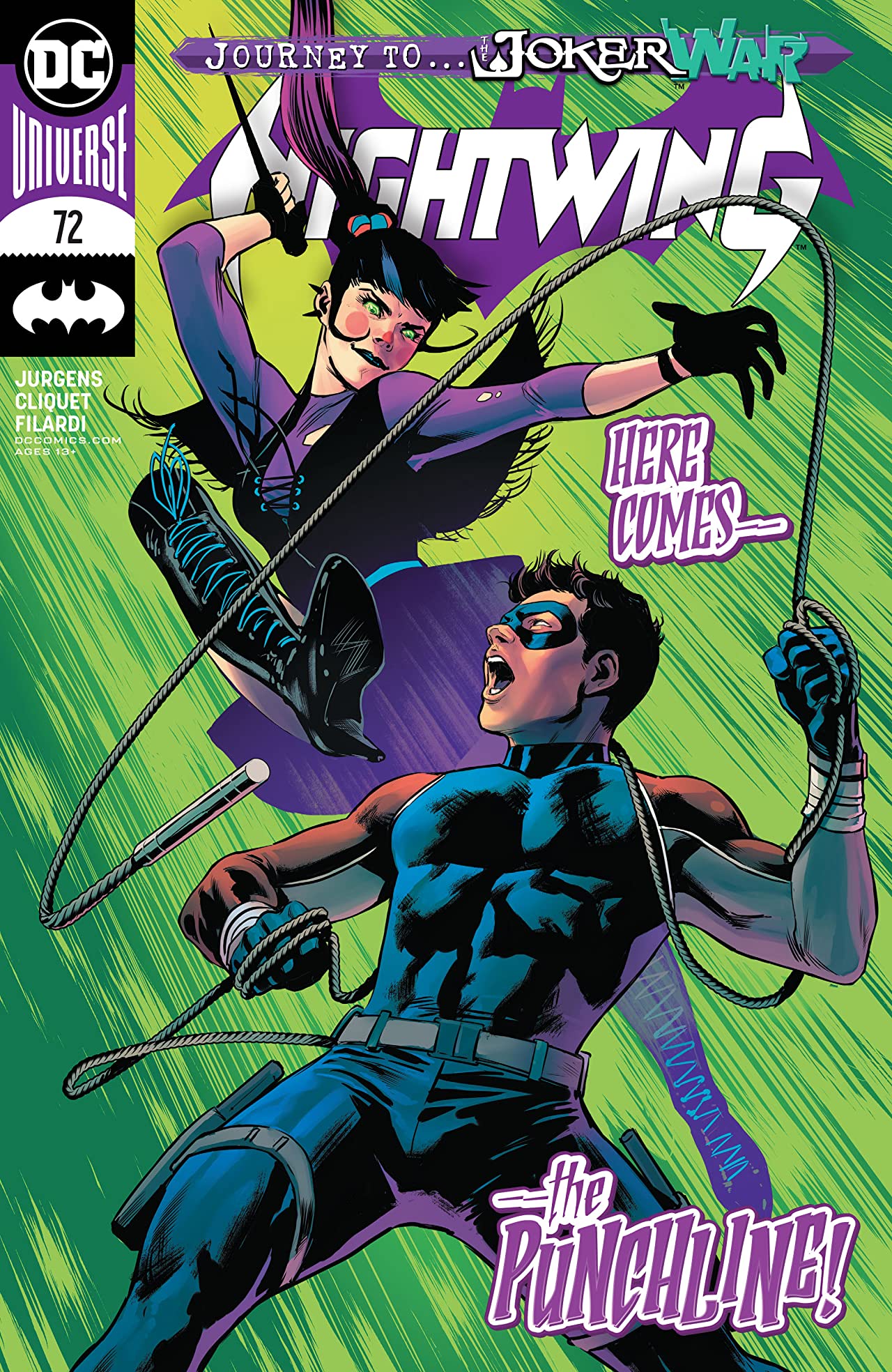 Overview: Ric Grayson returns to Gotham, but Batgirl quickly notices that he is not himself.

Synopsis (Spoilers Ahead): This issue picks up in Gotham City. We see Bea Bennet arranging firewood and pouring a fluid over it. She pulls out a lighter and sets the wood on fire. While this is going on, Batgirl tells us about Ric’s amnesia and that he and Bea have started a relationship. As we return to the fire, we see that the work is arranged in the shape of a Bat, a makeshift Bat-Signal.

Batgirl is in the trees and muses to herself that something has changed. She is worried.  It is time to talk to Bea but not as Batgirl. Barbara Gordon approaches Bea, and Barbara notes that Bea is disappointed. Bea was hoping to attract someone more “official.”  Barbara wonders if Ric told Bea that she is Batgirl. Barbara pushes that thought aside and puts her arm around Bea.

Bea recounts that the Joker showed up at her bar and slugged her. When she came to, Ric was alone with her in the bar and was acting strangely. We see a strange grin on his face as he tells Bea that the J-Man is gone. Ric tells her that he kicked Joker’s butt and sent him packing. Bea tells Barbara that she is relieved that Ric is okay and hugs her.  In the flashback, Ric tells Bea that Joker tried to use the crystal on him, but he punched Joker, snatched the crystal, and shattered it. Bea tells Barbara about Dr. Haas belonging to the Court of Owls and that Haas used the crystal to brainwash Ric into thinking he was a Talon.

Bea tells Barbara that Ric showed her the shattered crystal on the floor of the bar. Ric grabs Bea and lifts her up, kisses her, and tells her that he is hungry for pancakes. Ric manically made pancakes with a number of different ingredients including nuts, marshmallows and chocolate sauce. Bea is worried, but Ric shouts that he is fine. Bea believes that Ric was acting incredibly odd despite the lack of injuries as a result of his supposed encounter with the Joker.

Bea tells Barbara that Ric had been going downhill since the Talon episode. She says that Ric has been struggling with competing memories. Bea went to Gotham because Ric bolted for Gotham. Bea then informs Barbara that she knows that Ric was Nightwing and she is praying that Batman or Batgirl can help him. Barbara says that she will get Ric the help that he needs.

In Gotham, Batgirl glides through the city.  She is terrified and wishes that she stayed to watch over Ric more.  She wonders if she should call Batman, but she decides against it thinking that with Ric’s amnesia there really is no relationship. She pulls the Nightwing costume from her backpack and Ric jumps in wearing the gear he has been wearing in Blüdhaven.  Ric picks Batgirl up, and Babs asks if she is talking to Ric or Dick.  Ric tells her a joke with that manic smile on his face. Batgirl says that it is time for him to become a part of the family again. Before Ric can finish talking, Batgirl sees that there is something wrong. Punchline attacks Batgirl with a knife. Batgirl assumes that she is a Harley wannabe, and Punchline tells Batgirl that she left Harley Quinn drowning in her own blood.  Punchline slices Batgirls leg and holds the knife to the throat of the wounded Batgirl. Ric grabs Punchline’s arm and disarms her. Batgirl thinks that Ric is helping her, but instead he takes the blood from Punchline’s hands and paints a grin on his face. Batgirl is his to kill.  Barbara tries to flee, but Ric grabs her cape and knocks her out.

Joker arrives with the crystal still around his neck.

The punchline, excuse the pun, was that this was a plan by the Joker to take Batgirl off of the table. Joker’s overall goal in eliminating and brainwashing the family is becoming more apparent with each issue.

This is my first time encountering Punchline in the comics, and I found her very capable in combat. It looks like she could have easily handled Batgirl on her own, but Ric definitely threw Batgirl a curve and knocked her off of her game so easily. My one complaint is that the fight was too quick.

Final Thoughts:  The story really is starting the heat up, and I am hooked for the next issue.