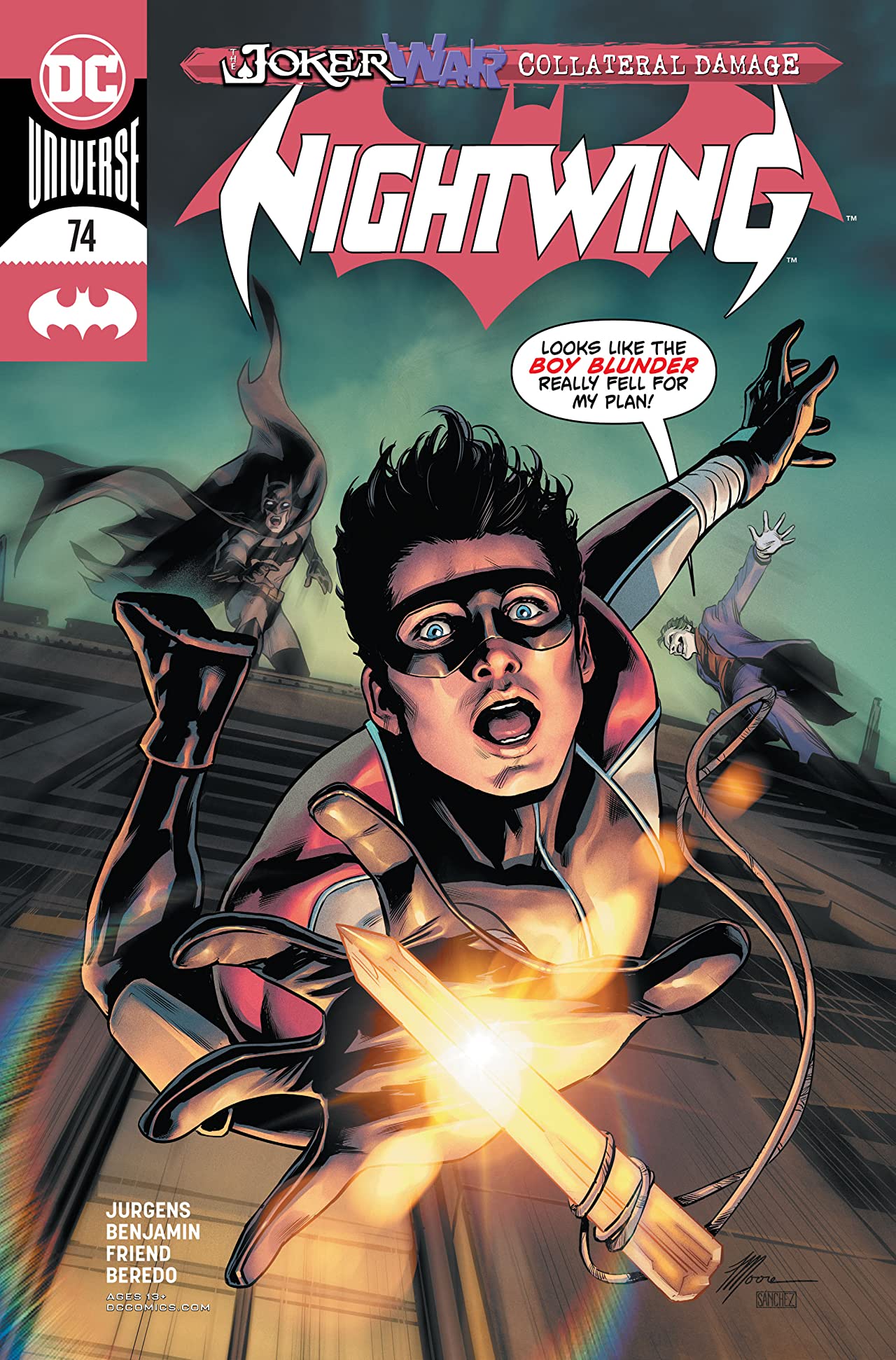 Overview: Robin, Red Hood, and Batgirl square off against a brainwashed Nightwing.

Synopsis (spoilers ahead): Bea runs through the streets of Gotham, lost in her thoughts. She hates Gotham, always has, and she barely knows her way around. She is here for one reason, to help Ric. Bea looks everywhere for Ric, chasing sirens wherever she turns. She knows that wherever there is trouble, Ric will be there. That is exactly what she finds.

Ric is with Tim Drake and Jason Todd outside of the parking garage of the hospital. Tim is in a Robin costume. Jason is in his Red Hood costume, his mask half shattered. The three are being rushed by a group of Joker’s clowns. Jason reports that there is a bomb in the hospital, and they need to deactivate it before it blows. Ric still has a silly smile on his face the whole time. He kicks Jason in the face, grabs Tim in a headlock, and punches Tim in the side of the head.

Bea is watching all this in horror. Ric has gotten worse.  Joker and Punchline are on the top of the garage looking on. Joker is proud of his “son.” Punchline then tells Joker that the bomb is set to detonate in twelve minutes.

Down on the street, Tim and Jason fight off the clowns while realizing that their greatest enemy in this fight might have been their former greatest ally, Dick Grayson. Dick brings the fight to Jason, saying that he is not working with the clowns, after all, he is the boss’ kid, which makes him management. Jason goes for his sidearm and orders Drake to take the bomb. Tim says not to hurt Dick, but Jason says that is up to their former ally.

Bea watches this in horror knowing that Joker might have made Dick capable of murder. Ric quickly dispatches Red Hood, and Hood loses his gun.

Joker is in utter glee. “Dickyboy” will have the chance to finish off Jason for good. Just then, Batgirl swings in, taking out both Joker and Punchline. Batgirl focuses on Joker, stealing the crystal, and jumping down onto the street.  Dickyboy picks up Jason’s lost gun. Jason does not believe that Dick has the stones to pull the trigger. Dick fires two shots at Jason’s feet. Batgirl lands on Dick, knocking the gun out of his hand.

Tim enters the hospital’s basement and finds the bomb. There are only thirty-nine seconds left, and it has wires of multiple colors. It is too tangled to trace the one that will deactivate it.

Dick kicks Batgirl off of him, and she loses the crystal.  Dickyboy recovers Jason’s gun and aims it at a downed Batgirl who says that he won’t shoot her.  He chambers a round; Joker is in absolute glee. Dickyboy approaches a pleading Batgirl but discovers that Bea, who now has the crystal, is standing between him and Batgirl. Bea tells Dick that he does not take orders from guys like the Joker, he stops them. Bea pleads with Dick to try to remember the truth; the time for the real Richard Grayson to come back has finally come. Dick grabs the crystal from Bea, and Punchline and Joker make a hasty retreat. Dick experiences the truth. He remembers Dr. Isabella Haas of the Court of Owls. As long as Dick can handle the pain, those lies will crumble revealing only the truth. Dick realizes that he is the son of the Flying Graysons. He is a man so centered that everyone cannot help but love him.

Dick drops the gun and throws the crystal to the ground. He is not Ric, he is Dick. Batman arrives. Barbara hugs Dick. Bea makes a note that Dick may not remember her, and she leaves.  Batman admits several times he was in Blüdhaven to make sure that Dick was okay. Batman knew that Dick had to find his own way back through the fog.

Tim runs to join the group.  He pulled the purple wire and with that, he deactivated the bomb.  Tim questions whether Dick Grayson is back and Dick responds with a joke he was telling before getting shot. Dick then wonders where Bea went.

Bea is in tears as she leaves.  She hates Gotham and always will, and now she will think of Gotham as the city that took Ric away.

Analysis: In reality, this is a one-scene issue. The bulk of the action takes place outside of the hospital. This issue gives us the conclusion to the Joker’s brainwashing of Dick as well as the end of Ric and the eventual return of Nightwing. With that said, not much really happens here.  This issue, like the last issue, basically is an issue long fight, and I really do not find issues like that very entertaining.

The art is in a gritty city crime style that fits with the story, but it really does not wow me either. The only splash page in the issue is the title page where Dick reveals his true intentions to Jason and Tim.

That leads me to what I did not notice last issue.  Tim Drake is not wearing his Red Robin suit but instead is wearing a more traditional Robin suit.  He is also drawn looking smaller and younger than I think he is; I am not sure what this is. Was it supposed to be Damian and then changed to Tim?

Last issue, I wondered about the condition of Jason’s mask, and I got the answer to that in last month’s Red Hood: Outlaw issue which fills in that gap. There is an editor’s note that cites the Red Hood issue when Jason says that he fought a man several hours ago, and Dick says that it was him. Dick certainly does get around though. Dick fought Barbara and Jason almost at the same time?

I was disappointed in Punchline here as well. I expect Joker to just be watching, but from what I understand about Punchline’s character, she would have been in the thick of the fight herself — not just a spectator who was easily dispatched by Batgirl.

Final Thoughts: It is good to have Dick back, and I do want to get back to the Sap storyline and the eventual return of the real Nightwing. I hope that Bea and Dick do get together since Dick does remember her.