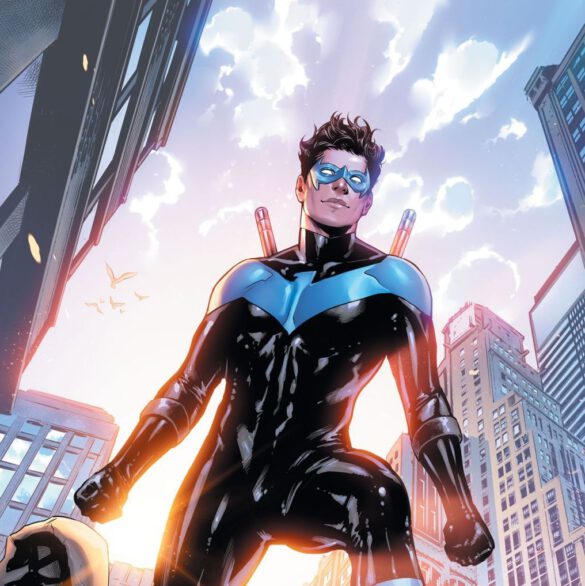 Overview: Nightwing must think out of the box when investigating a ransomware attack on a tech company.

Synopsis (spoilers ahead): Batman and Nightwing swing through the skies. It’s Christmas, and Batman asks Nightwing if he is coming tomorrow. Nightwing says that he is still thinking about it. After everything Nightwing has been through, Batman suggests that Nightwing should want some normalcy by being with family. Normalcy to Nightwing, however, was being with Bea, except he walked away from that.

Nightwing arrives at the office and is treated with disdain; they were promised Batman. Two executives and an IT specialist are there. Their computer systems were hacked, and global operations have been shut down. They sent for Batman because he is the best. Nightwing asks what the ransom is, and the IT specialist says that it is for $2.76 million, strangely specific. One of the executives says that the amount is moronic as the company is worth 10x more. After some back-and-forth over what Nightwing should or shouldn’t do, the IT specialist notes that the damage had to have been done from the inside and that the hackers are in the system right now. Nightwing sets off to find the hackers. We learn that Dexiturn is backed by a group that buys small companies, jacks them up, and then sells them for a massive profit.  The company is not admirable, but they were still victimized.

Outside, Nightwing finds people in the street along with a Santa Claus collecting for charity. Nightwing finds three masked people in dark clothing running out of the building. One of them stops to take some money out of Santa’s pail.  Nightwing pursues them into an alley. He attacks the burglars, and one draws a gun. Nightwing tosses one of his batons at the assailant and hits him in the eye. Nightwing continues beating on them when one pleads for Nightwing to stop. Nightwing orders the assailant to release Dexiturn’s systems, but the guy does not know what he is talking about. He says that the phony Santa paid them each fifty bucks to make a show of grabbing the cash. Nightwing realizes that the Santa was the hacker.

One of the two executives chides Nightwing when he returns to the office. The hacker had to have known his way around the network because he was able to get access through a cell phone. Nightwing leaves to track down Santa.

A little girl comes up to Santa and asks him if he is coming to her house tonight and if he remembers what she asked for. The girl’s mother tells the girl that Santa has a lot to remember, but Santa interrupts, saying that of course, he remembers. Santa hugs the girl, and as he walks off, the girl asks her mom if that Santa sounded like a lady.

Santa walks to a homeless camp under a bridge. One of the people asks if the approaching Santa is Clarissa. Santa starts to take off her costume and it is revealed that the person is a woman and a mother. Her daughter runs up to her, and an older lady at the camp tells Clarissa that the girl was fed, but Mazey, her daughter, says that she is still kind of hungry. Clarissa takes out a chocolate bar and gives it to the girl. The two go into their tent, and they are confronted by Nightwing. Clarissa quickly realizes that Nightwing knows that she is the hacker, and Mazey asks if he is going to arrest her mom. Nightwing says that he is there to listen if Clarissa will tell her story.

Clarissa tells her story. She worked at a start-up called Techtonic. She was hired right out of high school, and she became their star programmer. A year ago, Dexiturn acquired the company. Clarissa says that she was the one who created the software that caught their interest. Dexiturn promised her a pension, stock options, and benefits. All Dexiturn was interested in was the intellectual property and not the workers. When Dexiturn understood the software, they laid off all the employees and took the property as their own. Now finding a new job is impossible.

Nightwing asks her about the $2.76 million. She tells him that that is the money she calculated she would make working for the company until she retired; she believes that she is owed that.

Nightwing tells her that normally he solves problems by busting heads but here he can help a person directly. Mazey asks again if Nightwing will arrest her mother, and he assures Mazey that she can stay. He hands Clarissa a piece of paper with an address written on it. She is to be ready to go by eight o’clock tomorrow. A car will take them to that address.

The next morning a car rolls up. The driver is Dick Grayson, and he has been asked to drive the woman and her daughter to their destination. There is fresh coffee and rolls in the back. The two get in the car; they are to meet her host. The car arrives at Pinnacle One Apartment Complex, and they meet Bruce Wayne. Bruce tells her that Nightwing reached out to him and informed him that the two needed a place to live. Bruce owns the complex, and he wants them to be his first residents with all expenses paid. Clarissa is speechless, but she cannot possibly say yes.  Clarissa has friends in the encampment, and they depend on her. She cannot walk out on them. Bruce tells her that he should have been clearer. The offer is for her, Mazey, and all her friends. Just then, a bus pulls up, bringing the people from the encampment. Clarissa agrees to stay, and Dick asks Bruce if he should take the car to retrieve their belongings. Bruce says yes. After that, Bruce trusts that he will see Dick at the new house. Bruce, Barbara, Tim, Damian, and Dick gather at the house. They talk about the day’s events. Dick says that it still sucks that Clarissa lost her job. Bruce tells him that Wayne Enterprises is now buying Dexiturn, and Clarissa and the other employees can have their jobs back. The group remembers Alfred. Alfred taught Dick how to take the negatives that life throws and find what is good and persevere.

Analysis: I liked this story.  It is a very touching story for Christmas with a lot of heart and a happy ending.

I liked how the workers of Dexiturn are depicted. The executives are only concerned about solving their problem and finding the easiest solution to do that. They believe that in basically using Batman as their muscle, they can get what they want. They are incensed that Batman did not respond but rather, as they put it, one of his lackeys did. They feel that they deserved the attention of the boss himself. Instead of helping, they criticize Nightwing in every move he makes.

Nightwing is a detective in this story. Yes, he was duped by “Santa”, but he was able to track Santa to the homeless encampment.  I liked that Nightwing did not immediately go to arresting Clarissa but instead wanted to hear her story. Granted, it helped that she was drawn very attractive, but I did not get the sense that that is why Nightwing wanted to hear her story. In the beginning, we are told what Dexiturn does and hearing Clarissa’s story, it rings true.

There is really not much action in this story, and for me, I find that to be alright. I do like action, but I feel that the strength of this story lies in the emotion of it. We meet a woman who loses her job and home and is forced to live on the streets. She devises a plan to extort money, but only the amount that she believes she is owed. I also liked that Nightwing immediately went to Bruce Wayne for help.

I loved Bruce in this story. We see the philanthropist that he is. We see him caring for people he never met before and helps them even to the point of getting Clarissa her old job, which she is clearly very good at. It is good to see the family together and enjoying each other’s company in the end as well.

The art is really good here. I liked that the artist really did not reveal that Santa was a woman. We only learn that Santa might be female from the little girl that talks to her. The detail of the artist, especially with the backgrounds, is good. We see how destitute Clarissa is and how they are living in the encampment. There is a feeling that it is grimy. There are very few panels that do not have any background. It is funny that Damian’s mug had a bat symbol on it as well.

In a year of real-life hardships and grim storylines in comics, this is an uplifting issue to close the year on.