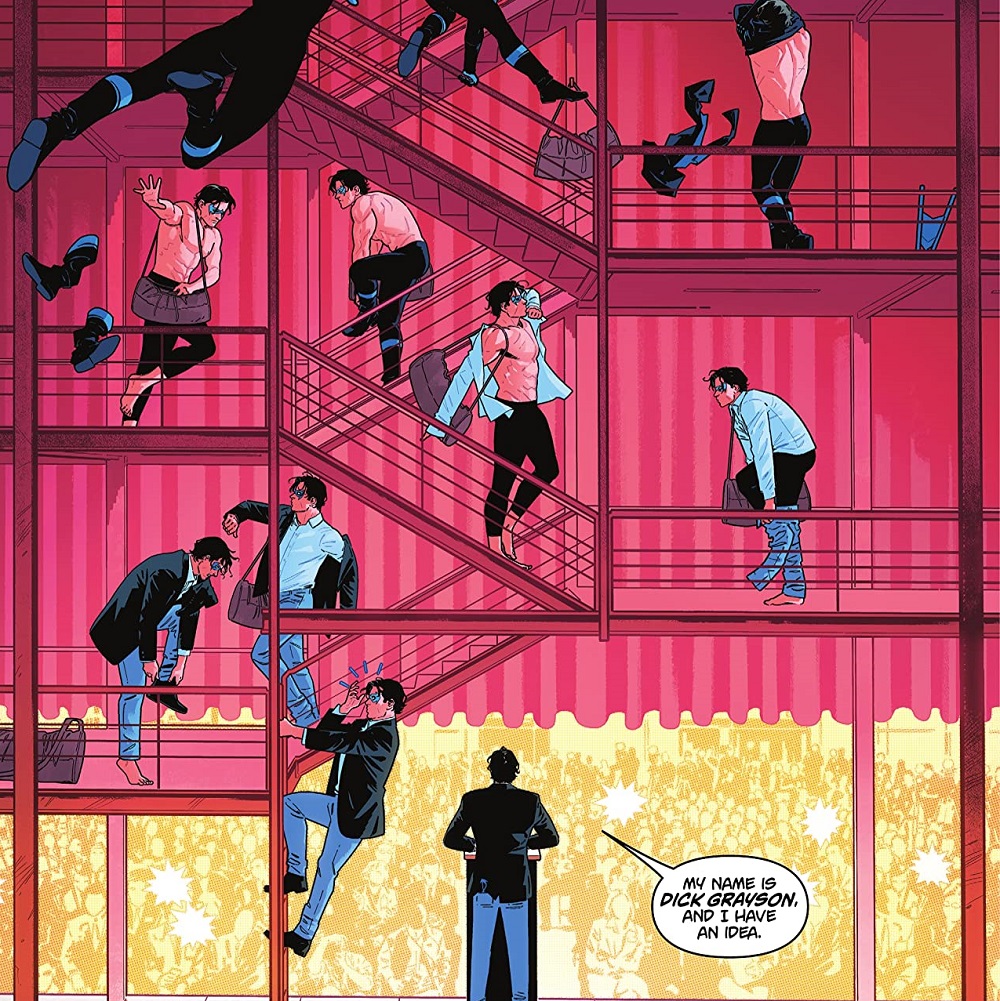 Overview: In Nightwing #83, Dick has big plans for Bludhaven, but first he has to escape the clutches of Blockbuster and the entire police department under his control!

Synopsis (spoilers ahead): Dick is still unmasked with Melinda and her family at their apartment building when Blockbuster arrives outside demanding that Nightwing surrenders himself. Before he leaves, Nightwing tells his half-sister that he knows about her criminal past. Melinda explains that she’s an undercover operative for the FBI, working to bring down mob bosses. That’s good enough for Dick, who re-masks and escapes to the rooftop where Blockbuster follows. He crows that Nightwing can’t leave alive, as a police chopper arrives and starts shooting. Dick rushes towards the chopper, tying up the SWAT team, and takes control of the helicopter, before ditching it and returning to Oracle and Robin, then passes out.

Two days later, Dick goes on a tour of the people in his life for advice on how to use Alfred’s money bestowed on him and tells them his idea. Going from Leslie Thompkins to the Titans to Lucius Fox, he ends up in Metropolis meeting Superman, who tells Dick that he’s sorry about Alfred and that he greatly respected him. After Nightwing tells Superman his plan, the Man of Steel gives his confidence in it before asking if Nightwing would be a friend to his son Jon while he’s away.

The next day, Dick gives a press conference and announces the Alfred Pennyworth Foundation. A philanthropic foundation set up to provide affordable housing, renewable energy, and public energy among other things, the idea proves instantly popular with the Bat-Family, who give their congratulations via text. Finally, Batman calls Dick in gratitude for the honoring of Alfred’s memory.

Nightwing #83 ends with Heartless stating to an assistant that Grayson’s plans for Bludhaven don’t comport with his own, and that he must steal Dick’s heart before Dick can give it away.

Analysis: The moment I think I decided that this was getting a perfect rating was near the beginning of Nightwing #83 when Nightwing was facing off against Blockbuster and his cops. It’s not the first scene, this comes after some back and forth with Desmond and Dick and Melinda’s brief conversation on her true intentions. It starts with the shirt-rip, revealing the Nightwing insignia, and carrying over to the confrontation between Nightwing and Blockbuster. Dick is cut off by a chopper shooting at him, Oracle cries for him to escape, and Dick responds by saying he can’t endanger the other tenants of the building possibly getting hit with stray shots. He runs towards the gunfire and pulls a move reminiscent of Batman disabling the GCPD in The Dark Knight.

This is precisely who Nightwing is.

It’s been a long, long time since the character has been handled with such verve and confidence that came naturally to him in his original series from 1996. Between the New 52, the stints as Batman, Agent 37, and especially Rebirth with the memory loss – and I’ve said all this before – it’s long felt as though writers were writing stories about the idea of Nightwing, and not who Dick Grayson as an adult and matured superhero. No more was this evident to me than the trade title of the first Rebirth story “Better than Batman”. That is…so off the mark of what Dick Grayson cares about, at least in how that title frames his mindset. In many ways, Dick is a better superhero than Batman (which in many ways was Bruce’s intention to begin with), but this isn’t something we’re meant to actively think of when reading about him. How do Dick’s experiences as a child, teenager, and young adult team leader carry him into his solo Nightwing career?

All of that is to say that his escape off the rooftop perfectly re-established who he is, with the death-defying confidence of a trained acrobat without sign-posting “IT’S JUST LIKE AN ACROBAT GUYS!” Dick has been around since 1940, longer than any other character featured in this issue (and there’s a lot of them), save for Superman and Batman themselves. You have to stick within a requisite level of competence for him to be believable at this stage of his life.

I just really appreciated it, ’tis all.

Which is not to do down the rest of the issue. It’s rare to get stories like these where the action is relatively minor and characterization and conversation take the foreground. Taylor’s been doing that consistently, and it’s been such a welcome command of tone. The people in Dick’s life who aren’t costumed heroes like Leslie and Lucius, as he absolutely would seek their counsel. It’s always great to see him engage with the Titans (something Chuck Dixon – through possible order of Denny O’Neil – rarely did), and, especially Superman. His relationship with Superman has been inconsistently remembered throughout the decades, but it’s always a joy to see revisited. The two do have a working relationship for many years during the Silver Age World’s Finest stories, and to the laymen out there, Dick named himself Nightwing because of Superman telling him about the legend from Krypton. Seeing the two sit down and chat about Alfred, Bruce, Jon, and Dick’s ideas was so pleasantly wholesome, but it’s not something we need to see all the time, but it’s treasured when it’s pulled out all the same.

Everything else in Nightwing #83 is just frosting on the cake. We get a “friendly” kiss on the lips with Babs that either punctuates their romantic tension in the run or is a promise for something more. We get a return to the aforementioned Bat-Family Text-Chat, complete with Cassandra going crazy with the emojis. Finally, Batman – who is currently alone in one of his various makeshift Batcaves, looking at a picture of a young Alfred and Dick, emotionally thanking Dick on the phone. You’ve got to applaud. It was all wonderful stuff.

Taylor said this is the end of the first arc, setting up what's to come. It's been a fantastic lead-up, and even with the betrayal of Babs back in some costume coming up, we still get to see the Bat-Family together in action in the future. With James Tynion leaving, I'm hoping Taylor ends up either having a long-lived era on this title or transitions over to the main Batman series. His heart for these characters has made this the most pleasant Bat-Book to read in many, many years.