Review: Batman and the Outsiders #11 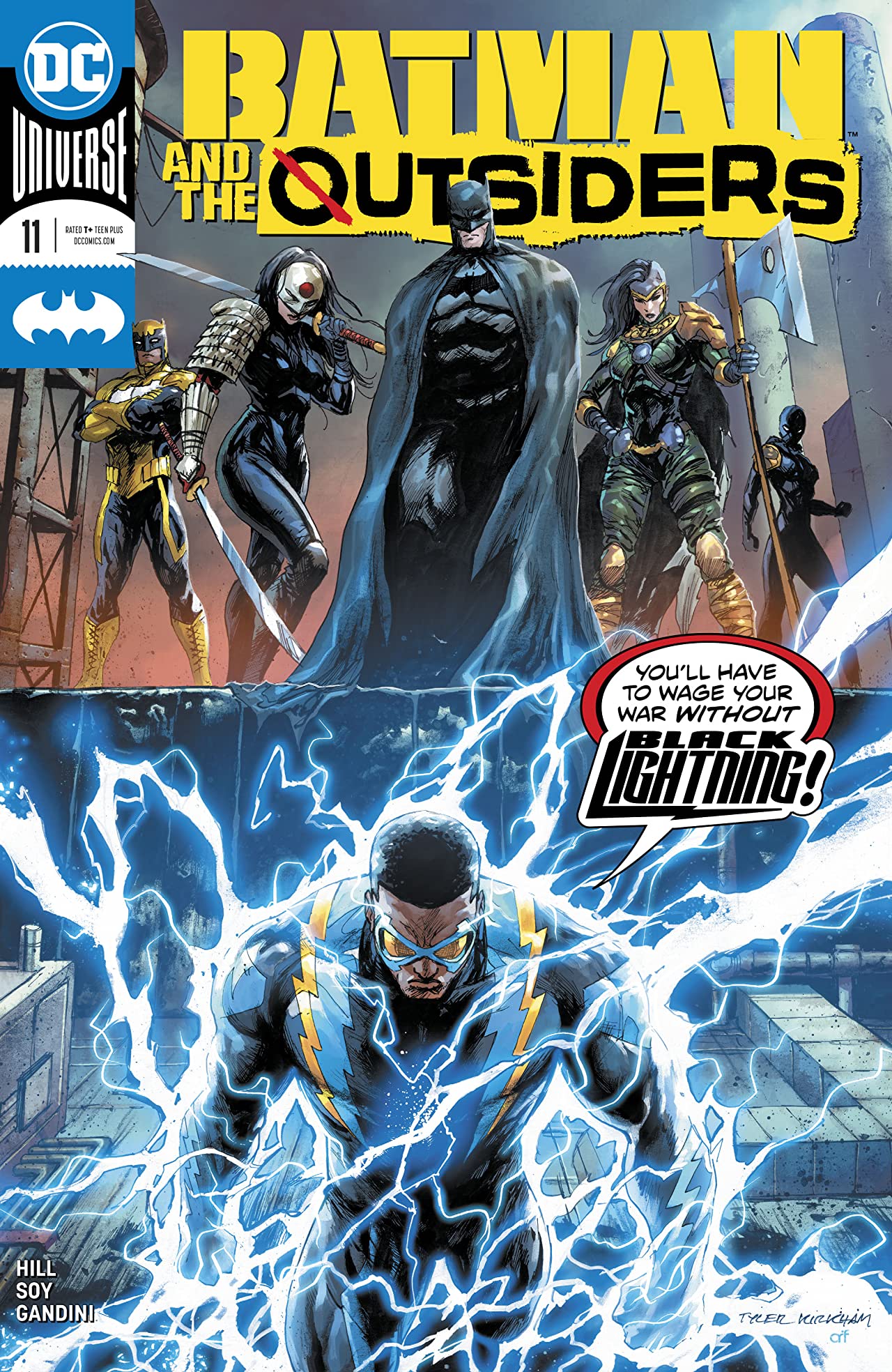 Synopsis (spoilers ahead): Jefferson, Signal, Katana, Orphan and Shiva all square off against Karma, Ishmael and Kaliber in the shores of Cambodia. Jefferson takes on Ishmael, the killer of his teacher friend. Signal and Orphan double-team Karma. Katana fights Kaliber. Lady Shiva maintains that she’s taking no sides, but decides to assist Jefferson against Ishmael. Signal distracts Karma, giving Orphan an opening to take him down. Katana easily dismembers Kaliber and gives the Outsiders their victory. Shiva insists that Jefferson kill Ishmael, but Jefferson refuses, instead wanting to learn what Ra’s al Ghul is planning. As Katana interrogates Kaliber, he sets off explosions in the populated Cambioda area. The Outsiders rush to save the citizenry, with Cassandra appealing to Shiva’s benevolent nature. Shiva says that she loves her daughter, and will help her.

Back in Gotham, Batman takes Sofia to an underground bunker formerly belonging to the Court of Owls. Inside, there are over two-dozen types of weapons and armor for her to help form her new hero identity. While he’s instructing her, we see Ra’s al Ghul in Markovia arrive at a giant ship-like base with a turtle shell on its top.

Beginning positively, the scenes with Sofia and Batman are pretty good. Hill writes a solid, reliable Batman with a creative outlook for why he does what he does. He’s patient, resolute, and open with his emotions but not to where it’s out of character. His integrating Sofia into the crime-fighter life is written with enough verve and life-experience that Batman would have at this point in his career that none of it registers falsely.

I can’t say the same thing for the bulk of the issue, which depicts the beach-side fight in Cambodia between the Outsiders and Ra’s al Ghul’s goons. The dialogue lands like a lead balloon, flattening every scene with a relentless lack of urgency. Everyone talks like they’re pontificating at a church, gravely making declarative statements and “badass” one-liners that sound like they’re intended as finishing moves in a rap diss-battle.

It’s the worst with the Asian heroes. Tatsu Yamashiro a.k.a. Katana is Japanese born and raised. Going back to the original Outsiders, she is historically very seriously-minded and suffers no foolishness. But if you compare her writing under Mike W. Barr in 1983 to Bryan Edward Hill today, you’re not going to find much stylistic difference. That’s not a good thing with this type of character, since the book as her the field leader of the team, rendering her boring and cliched. It’s less of an issue  – but an issue still – with Shiva and Cassandra. Hill knows not to give Cass large amounts of dialogue, but I personally object to her referring to Shiva as “Mother”, particularly since she referred to another character by that name in her New 52 origin. But “mother” infers a familial affectation, which Cass has none. I’m sure she has no idea what to call Shiva (just plain “Shiva” worked fine in the past), but their complicated history feels blander than it should be due to those small details in her addressing Shiva.

Speaking of Shiva, she’s admittedly a complicated character to write, and Hill’s depiction of her lately has been better than most. Shiva’s her own woman, and the more she gets away from the fairly racist idea of her being a servant of any cause, the better. But her scenes with Cassandra in this issue, still, don’t ring entirely true. She tells her she loves her and she will help her cause, and I really feel that this is too easy. Does Shiva love Cassandra as a daughter? It’s certainly nice to think so, but we’ve not been given a whole lot of evidence for that. At least, not traditionally. Ultimately Cassandra is definitely Shiva’s chief interest and has been ever since the two discovered their mother-daughter relation. But this still feels too complacent of an idea. Shiva spends ninety-nine percent of the time berating Cass for her heroism and allegiance to Batman. For her to stroke Cass’ chin and tell her she loves her, that feels like it should be earned as a moment of emotional catharsis. The idea of Shiva and Cass fighting side-by-side is inviting and hasn’t been done before. But the reason it’s not been done before is that they’re always at odds. This is a standard action comic book where none of the events are any more emotionally affecting as what’s come before, so scenes like the one in question feel like a placeholder to keep the story moving.

Speaking of cliche, the fight between Signal, Karma, and Orphan was definitely cribbed from other comics involving telepaths, but Cassandra’s fighting skills don’t work that way. Karma cannot simply read her mind and know what she’s about to do, as her skills make her fighting style completely instinctive depending on the opponent’s body language. Even if one argues that the New 52 Cass is different, the resolution to the fight being that Signal just walks up to Karma, says a line of dialogue, and that’s enough to distract him…it’s really lame.

Final Thoughts: I want to like this book so much more then I am, and I feel inconsistent writing about it. Everything that happens – on paper – is awesome. The fact of the Outsiders rolling over Ra’s’ men is cool, but there’s no excitement in the scripting. If the plots stayed the same, but there was a different approach to the dialogue and outlining of the events and sequencing, this would be an easy series to recommend. But every month each scene reads as rote, uninspired, and obligatory. I know it can be better. There’s so much potential in the characters to really spark off the page.