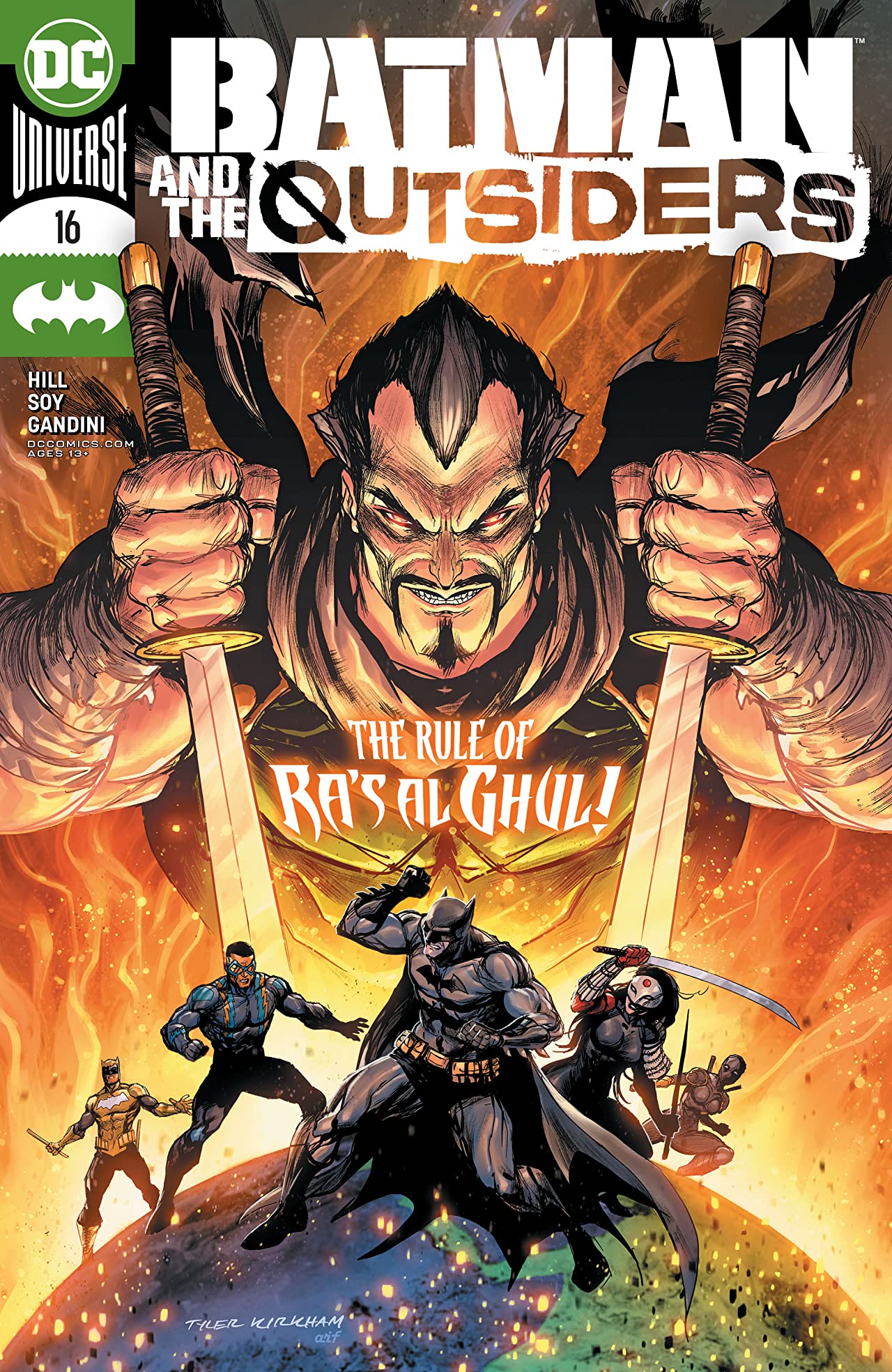 Overview: It’s Black Lightning vs. Ra’s al Ghul for the fate of the world, as the Outsiders battle it out with the League of Assassins!

Synopsis (spoilers ahead): Black Lightning’s new powers give him a moment of pause as he faces down Ra’s al Ghul. While the Demon’s Head is infused with alien technology, Jefferson Pierce reflects on a lifetime of self-doubt and is determined to set the course for his own future.

Meanwhile, inside the office building where the League has been stationed, Batman and the Outsiders arrive to stop Ra’s from taking over the world. Ra’s new abilities blast the team, felling everyone but Orphan, who’s urged on by Shiva to go beyond Batman’s teachings and become what she wants to be. Orphan single-handedly battles the League, while Black Lightning and Ra’s trade offers for the other to join their side. With one lightning blast, Jefferson overwhelms Ra’s, blowing him across the city.

With the League defeated, Batman expresses pride and acknowledges that he’s not the one who can take them as far as they can go in terms of fighting experience. He promises to elaborate upon returning to Gotham City.

Analysis: This penultimate issue of the series brings us the much-anticipated confrontation between Black Lightning and Ra’s al Ghul, a confrontation that’s immediately more meaningful than another Ra’s and Batman fight, and it’s effectively done in two panels.

I really want to be glowing with this review, but I can’t in good conscious ignore the terrible pacing that turns this into a serious anti-climax. While Duke and Sophia and Katana didn’t necessarily need their individual storylines addressed during this confrontation with the League of Assassins, what we do get with Jefferson and Cassandra is so sped up that you’re not sure what to feel. Jefferson talks about self-doubt and not wanting to live under Batman’s shadow like he has all throughout the series, but that’s always played in his head more than consequently affected his actions. He’s always been determined and stuck to his guns, never compromising. There was never any threat that he’d join Ra’s’ side, but there should’ve been pains to make his fight with Ra’s somewhat suspenseful. It’s not. He blasts Ra’s twice and wins. Let’s remember what’s happening in this issue here: Ra’s al Ghul has alien superpowers. Ra’s is floating high above the air and people like it’s an anime (appropriate given the Tokyo setting). At no point do any of the Outsiders appear shocked by this, nor does Jefferson seem the least bit intimidated.

The same with Cassandra. I am all for Cass kicking butt and clearing rooms full of bad guys, but that’s her bread and butter. She was always going to do that, so what’s actually being said by Shiva encouraging her and saying she’s proud of her when she does nothing different than before? Shiva’s whole thing is believing that Cass holds back, but that’s not the same thing as thinking she can’t beat up several assassins. The fight was determined the moment the Outsiders arrived and Ra’s left to square off against Black Lightning. Between Batman – a top-tier DC martial artist himself – Shiva and Orphan – two of the best DC fighters – and Sophia and Duke, who both have powers, where exactly was the chance that they could’ve lost? If Ra’s kept pelting them with energy blasts and actually tried to kill them (he considers everyone beneath his notice, which is a mistake you’d think he’d learn to avoid by now), self-doubt and tension would be believable. As it stands, this issue is a lot of people talking at each other, and a rock-paper-scissors balance of overpowering one another.

I’ve been reviewing this series for months now, and aside from the one fill-in story with a different artist, I’ve been suffering the same complaints each issue. That the years-long storyline concludes with the exact same deadened tone as the issues leading up to it shouldn’t be much of a surprise, but it’s doubly disappointing. Again, these are great characters. The central conceit of the book – questioning Batman’s leadership of these special heroes – is sound, but the book goes out of its way to assure the reader that each character doesn’t need Batman to the point that that’s all it’s saying without adding anything else to make it a worthwhile statement. On top of all that, it’s a useless argument to make in the first place because characters like Jefferson and Cassandra have been around for decades already. Long-time readers know how much they’re worth, so – very much like Barbara Gordon Batgirl post-2011 – the writers are trying to justify characters who don’t need to be justified. It’s a presumed argument, one that no one was asking and doesn’t need to be repeated, and certainly not in the same way for months and months.

Final Thoughts: I’m disappointed because the series has felt bereft of ideas beyond the basic premise, unable to elaborate or even search for anything else to talk about, resulting in a one-dimensional good guy/bad guy fight that has very little personality right up to its end. Of course, I’ll be interested to read the final issue, but aside from the redemption of Shiva, this book has ended up feeling terribly inconsequential. It’s an annoying shame.