Review: Batman and the Outsiders #6 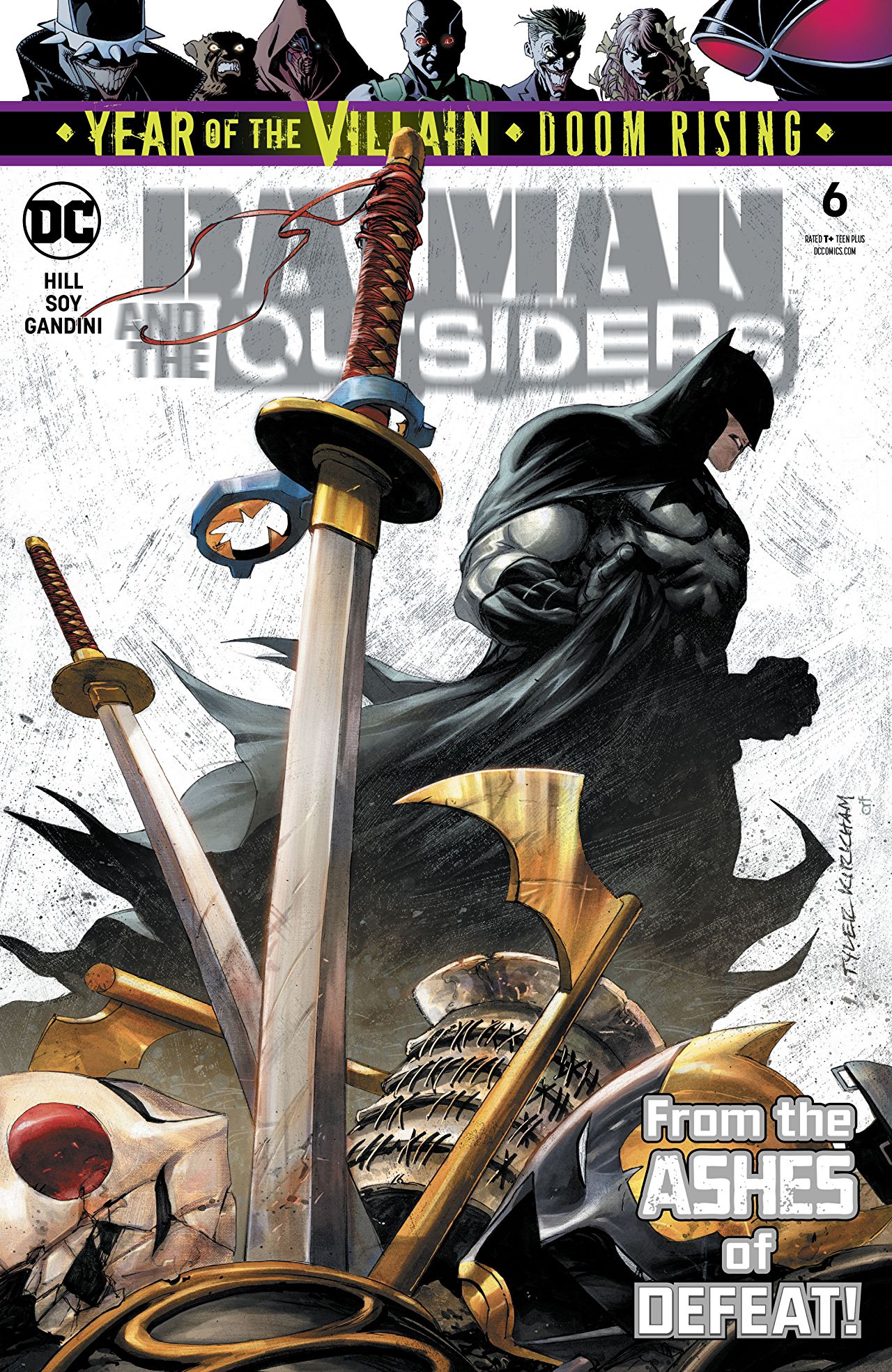 Overview: Lady Shiva and Ishmael reveal a secret to Duke and Cassandra as the rest of the team prepares to head back to Gotham.

Synopsis (spoilers ahead): Jefferson places a call to Bruce to notify him that they are returning with Sofia.  He wishes to know what Bruce will do with her and Bruce assures him that she will get rest.  Before Bruce gets off the phone, he asks how Duke and Cassandra are doing.

The story shifts back to Signal and Orphan fighting Ishmael.  Ishmael easily defeats them but asks them to follow him when they recover because Ra’s al Ghul has something to show them.  They gear up and then depart using Signal’s powers to track Ishmael.

A fragile package is delivered to Alfred at Wayne Manor.  The contents are a chess set featuring Batman and the rest of the Outsiders as chess pieces.  Accompanying the “gift” is a warning seemingly from Ra’s al Ghul.

Signal and Orphan track Ishmael to a subterranean facility.  Ishmael invites them in to see the truth and they enter to find an imprisoned Karma.  Ishmael is not alone as Lady Shiva is also present.  She claims that Bruce lied to both of them and this is proof.  Orphan is angered by this and attempts to fight her mother.  Duke attempts to fight Ishmael at the same time.  Both their attempts fail and Ishmael uses his abilities on Duke.  Lady Shiva tells Orphan that she is not ready, but to come find her when she is.

Lady Shiva has a video call with Ra’s al Ghul to update him on what happened.  Ra’s al Ghul says that they will destroy Batman by turning his children against him.  Shiva reminds Ra’s that Cassandra is hers to mold.  He agrees and says that he will teach Duke the way of darkness since he believes the light failed him.

Orphan regains consciousness in the underground facility and finds everyone gone including Karma and Duke.  She finds a chess piece of Lady Shiva on the ground in front of her and screams with rage.

Analysis: The first arc of this new series ends with more questions than answers for the Outsiders team.  Before getting into my thoughts on the issue, I wanted to briefly mention something that I didn’t understand.  The first page of this issue is Jefferson talking to Bruce and it is the morning after the night they rescued Sofia.  In the previous issue, Jefferson wonders where Ishmael is after the fight for Sofia.  I find it hard to believe he didn’t check in with the rest of his team at that moment.  Even if we assume he did and that he discovered Duke was MIA and Cassandra was beaten, then I doubt he’d leave Khadym without them.  Unless I misunderstood something, I don’t get how Jefferson and Tatsu don’t seem worried that Duke and Cass are missing.

Aside from that, there are some really good action sequences in this book.  Soy consistently draws these characters as moving like the exaggerated and athletic fighters that they are while still keeping it grounded in a sense of realism.  Gandini’s colors also give the strikes and blows extra energy.  There is an excellent double-page spread full of detail telling the story of the fight blow by blow.  I still hold out hope that we will get to see Cassandra showcase her prodigious martial arts skills by winning against an opponent, although there is no shame in losing to Lady Shiva.  Ra’s al Ghul states that he will show Duke the way of darkness and Ishmael uses his parasite power on Duke, which leads me to believe that Duke may have his powers taken from him or modified in some way.

I liked the symbolism of the chessboard in portraying the conflict between Ra’s al Ghul and Batman.  This entire arc and their fight against each other in general has always had that feeling.  I mentioned in a previous review that they are both strategists who are remarkably similar but also drastically different in terms of how they deploy and treat their teams.  I like Ra’s al Ghul’s strategy of trying to turn Batman’s chess pieces against him and hopefully, the next arc offers some compelling reasons for them to switch sides.

But for this arc, as I said earlier, I do have quite a few unresolved questions.  What happens to Sofia going forward?  I hope she continues to appear and was not just an asset for the team to acquire from Khadym and stash away.  What happens with Duke and Cassandra?  Will they switch sides and what would convince them to do so?  What happens with the mission Black Lightning and Katana were going to go on together?  Will Batman personally enter the field in an attempt to rescue Duke?  These are all things I’m looking to be answered in the next arc.

Final Thoughts: An action-packed issue with fantastic art that puts the Outsiders on a shaky status quo going into the next story arc.