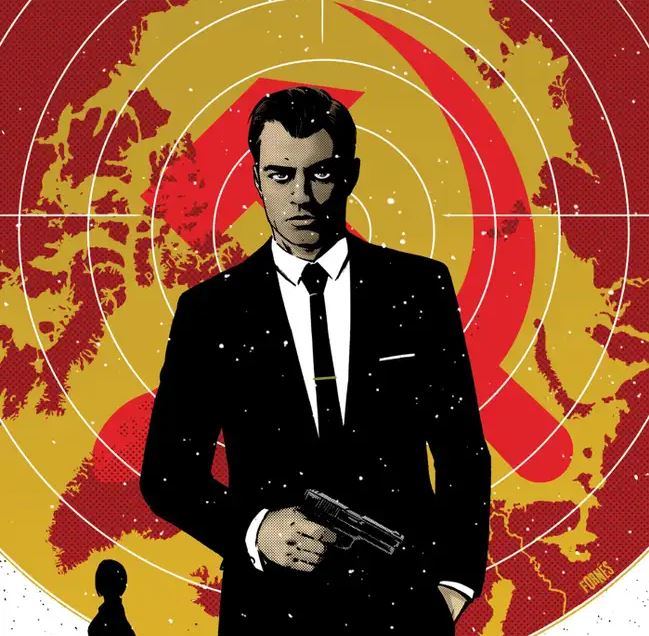 Overview: Written by Scott Bryan Wilson with art from Juan Gedeon, Pennyworth shows our favorite butler during his past as MI5 superspy, while in the present, his past catches up to him in a dangerous way.

Editor’s Note: This collected edition includes all seven issues of the miniseries Pennyworth, which had its first issue released in August 2021 and the final issue released in February 2022. This review focuses on the story as a whole rather than the individual issues that made up the limited series.

Synopsis (spoilers ahead): Our story opens with Alfred Pennyworth working a case for MI5 investigating American weapon plans that were stolen and sold to the Soviets. Alfred is working this case with Shirley, a woman he has known since childhood. Shirley and Alfred are in a relationship and are very flirty even as they are infiltrating a Soviet base. Alfred and Shirley think they are searching for nuclear weapons, but they discover something far worse- a cyborg super soldier.

All this is being narrated by Alfred in the present. Alfred is currently being held hostage and trying to figure out where he is by using his spy training. He can tell that he is not in Gotham City and that he is not being held captive by one of Batman’s villains because they would be showboating. Alfred is confident that he will be found by his friend and former spy colleague Dave Boy because every day since they left the service, they send each other a signal. Little does Alfred know that Dave Boy is also being held hostage.

We cut to a scene of Alfred’s childhood, which shows that his father works for Shirley’s father. His father was not only teaching him how to be a butler but also how to be a spy, including how to polish a spoon properly and then to use that polished spoon to see behind you and check your surroundings.

Meanwhile, Alfred breaks out his cuffs while thinking back to that mission with Shirley. Alfred and Shirley are spying on the Soviet scientists and the weapons that the Soviets have created. Shirley is watching the scientists while Alfred goes to check the labs. While investigating the lab, he finds that the Soviets know Alfred and Shirley are there! Alfred meets back up with Shirley but doesn’t tell her. In hindsight, he should have because as Alfred goes to take a look at the cyborg weapons, Shirley turns on him. It is revealed that Shirley has been working with the Soviets. Her father also worked with the Soviets, and Alfred’s father was his butler to keep an eye on him.

The cyborgs are ready to blast Alfred and attack the compound, but right before they do, they whisper something to Alfred and let him live while they attack their Soviet captors. Alfred escapes into the cold snow and is about to die. He is rescued by Dave Boy, who tells him that they knew Shirley was working with the other side all along.

In the present, Alfred’s captor reveals himself, and it is Shirley’s father, who has not aged a day due to a serum he has taken. Alfred tries to fight him by rolling up his sleeves and saying, “Prepare for your proper thrashing, sir” (my favorite part). Shirley’s father is able to make quick work of Alfred and brings out Shirley.

This is the first time that Alfred has seen Shirley since the night that she betrayed him. She also has not aged because of the same serum that her father took. She explains to Alfred how she wants to end the Soviet experiments and shows the one success that they have had: the KGBeast. They save Dave Boy, and Alfred is enjoying reliving the old days despite having his guard up. Shirley keeps asking him to tell her what the weapons said to him all those years ago, but Alfred won’t tell. She is then fed up with him and locks him back in those same cyborg weapons that she did all those years ago. This is a finished version of the weapons, and they look like the mutants from The Dark Knight Returns, which is a nice nod.

In a flashback, it is revealed that the weapons told a chemical formula to Alfred. Alfred made a deal with them that if they ever cross paths again he will say “The dull ear of a drowsy man,” and he will be on their side. He gives them a cure that he has kept on his person for years. It cures their mind control. The KGBeast tries to stop them from destroying the facility but is easily overpowered and killed. Alfred takes Shirley into custody for her crimes and is at peace that this case is finally put to bed.

Analysis: For those that love Alfred Pennyworth and miss seeing him in regular continuity, then this miniseries is for you. Writer Scott Bryan Wilson captures the British dry wit of Alfred that we all love so much.

I really enjoyed seeing Alfred as a British super spy ala James Bond, and that is another series that Wilson wrote really well. Alfred and Shirley had this great flirty relationship, and Alfred admits that she was the love of his life. That thread makes her betrayal all the more shocking and hurtful.

We all miss Alfred in the main continuity, and it’s great to see him in the spotlight as a hero. Alfred shows some serious fighting prowess that would make Batman jealous. I hope to see more comics like this exploring Alfred Pennyworth as the handsome, charming super spy who is always cool under pressure. Now we know where Bruce Wayne gets it from.

Editor’s Note: DC Comics provided TBU with copies of the original issues of this series as they were released, but not of this new edition. You can find this collected edition and help support TBU in the process by purchasing this edition digitally either for Comixology through Amazon or as a physical copy in a paperback form at Amazon or from Things from Another World.

Pennyworth is a fun miniseries that harkens back to Alfred Pennyworth's early days as a superspy. It's a well-paced, classic thriller akin to James Bond.