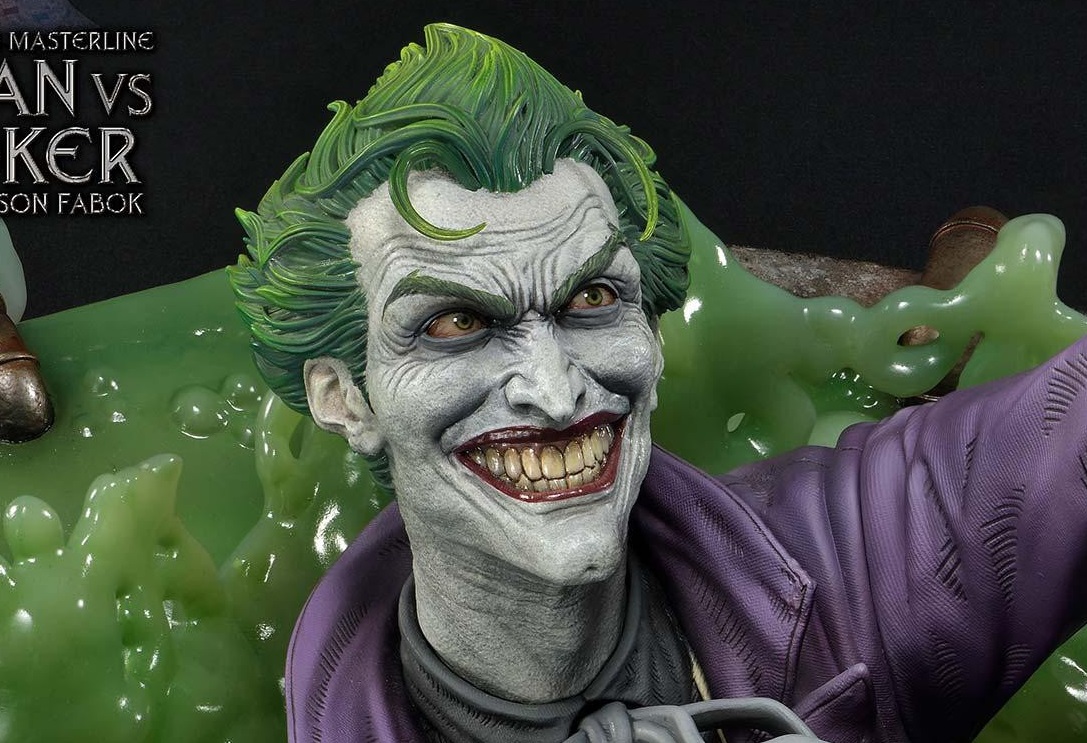 Prime 1 Studios has released details for their latest Ultimate Museum Masterline statue, which features a concept by Jason Fabok of Batman versus the Joker. The one-third scale statue measures about thirty=four inches tall and features two interchangeable heads for both Batman and Joker and a bonus head for the Joker if ordered directly through Prime 1 Studio. It is priced at $2,599 and is expected to ship between January and March 2023. You can preorder the statue at either Prime 1 Studio, Entertainment Earth, or Sideshow Collectibles.

“All it takes is one bad day to reduce the sanest man alive into a lunatic. That’s how far the world is from where I am…Just one bad day.”– The Joker to Batman

Prime 1 Studio is pleased to announce the latest masterwork of collaboration with legendary comic book artist Jason Fabok for our Ultimate Museum Masterline Series: The 1/3 Scale Batman vs. The Joker!

With its design, concepted by Jason Fabok, and expertly executed by Prime 1 Studio, Batman vs. The Joker is the ultimate fight brought to life between Good & Evil, Order & Chaos, Reason & Insanity!

Our talented and dedicated artists have devoted their time and efforts to create this legendary match-up. Batman’s iconic look has been recreated and no detail of his costume has been left to chance. His perfect physique has been rendered with anatomical precision. His cowl, cape, gloves, and boots have been imbued with a leather-like texture. His eyes and facial expression exhibit a deep, but focused rage. His scalloped cape billows with the rushing wind as damage has been strategically added to elicit a battle-worn look. His fabled suit is completed by his finned gloves and famed utility belt.

The Joker is not to be outdone! Falling backward into a toxic vat of death, The Joker is still dapper as ever in his classic purple ensemble, wingtip shoes and bolo tie. Hardly his first time in a chemical bath, The Joker seems the least bit concerned as he flashes Batman his trademark ghoulish smile and trains his signature long-barreled revolver on Batman’s scowl!

And speaking of scowls, the Deluxe Version includes two additional swappable heads…one each for Batman and The Joker, to expand the emotional storytelling!

Excitingly, if you order your Batman vs. The Joker statue from our Prime 1 Studio Online Store and as well some of our authorized retailers. You will have access to this Deluxe Bonus Version which gets you swappable head part for The Joker!

Batman and The Joker have been at odds before, but never has it been more dangerous than this moment: unfolding over an unbelievably involved base. With caustic steam billowing from its scorching hot pipes, this dangerous chemical factory is further jeopardized by a large amount of dynamite… and The Joker has the detonator! Has the Dark Knight Detective miscalculated? Or is this classic confrontation headed for an explosive conclusion?

Whether you are a fan of Batman, The Joker or Jason Fabok, this is one piece you won’t want to miss!