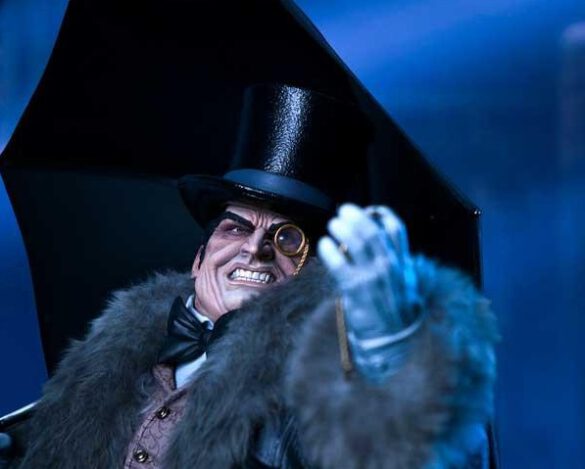 Prime 1 Studio has released details for their latest Museum Masterline statue, which features Penguin based on a concept design by Jason Fabok. The one-third-scale statue measures about twenty-five inches tall. The deluxe version includes three additional head sculpts, multiple swappable hands, and three different umbrella tips. As with most Prime 1 Studio statues released, there is an exclusive item available if ordered directly through Prime 1 Studio in the form of an additional head. The statue starts at $1,199 for the standard version and $1,449 for the deluxe version. It is expected to ship between October 2023 and January 2024. You can preorder the statue directly from Prime 1 Studio.

Everyone knows that Batman has the most colorful, and prolific Rogue Gallery out of any superhero out there. And among the top three, Gotham City business mogul and crime boss, Oswald Cobblepot, is a constant thorn in Batman’s side!

Our talented sculptors and painters at Prime 1 Studio enjoyed bringing Jason Fabok’s latest statue come to astonishing life. They have imbued this 24.8-inch-tall statue with as many real-world textures and as much realistic detailing as they could. The Penguin looks ready for a night out on the town! Decked out in his top hat, fur-lined leather coat, and one of the many umbrellas in his arsenal, Mr. Cobblepot looks like a man at the top of his game.

Prime 1 Studio has gone to great lengths to make sure The Penguin is dressed to the nines, by lining his coat with fur, and making everything else in his ensemble look like how it should feel. The thing about The Penguin, is that you almost never see him dressed down. He looks fantastic in his bowtie, waistcoat, and gold accoutrements.

Surrounded by his blatant display of wealth, The Penguin looks sharp on his own rooftop base, adorned with a light dusting of snow, which is telling of which season this famous Gothamite is celebrating.

And while this statue may be impressive on its own, this statue is even better when displayed together with MMDC-57S Batman Triumphant Concept Design by Jason Fabok!