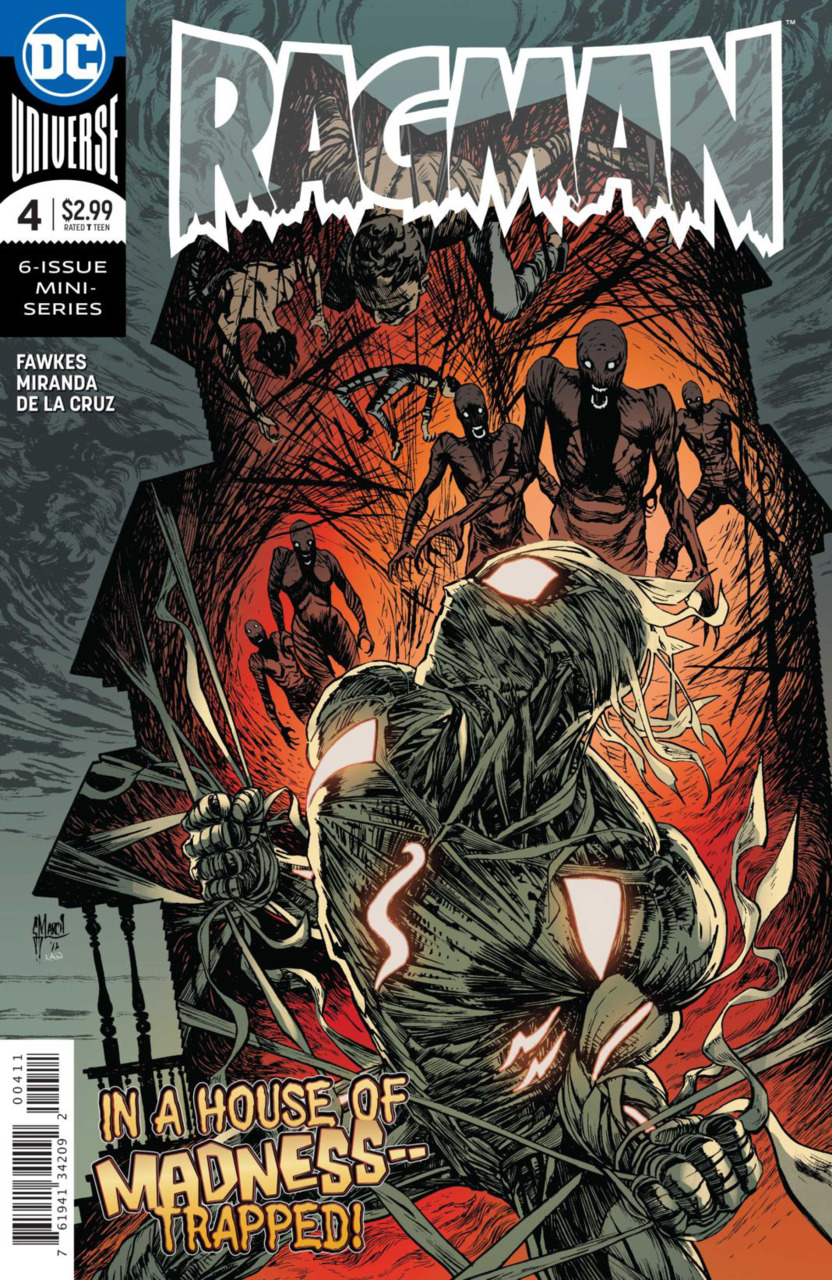 Overview: Etrigan recalls the origin of rags, and tells it in a rhyme. Frank’s son becomes an Anchor, so the demons continue to have a time.

Synopsis (spoilers ahead): Ragman and Etrigan are making their way through the city, fighting demons as they go… well, Ragman is. Etrigan keeps heading off to the sidelines and grins as he watches Rory take them on by himself. When Rory calls him out he helps, but Rory (as well as his best friend, Frank) believes that Etrigan is playing him.

We cut to another part of Gotham City, where the head demon tells the others that he needs more sacrifices and that they need to provoke Ragman further in order to reopen the gate that Etrigan ruined for them. He gives them an address, telling them that an Anchor is awaiting them there.

Etrigan reveals to Rory his knowledge of the rags. They came from Hell, and the Templars got ahold of them. They used them to destroy evil itself, but the owner was killed and the rags sealed away, until Rory and his team found them. Rory connects that Fanshawe was working for the demons as their Anchor, but that first they went after Rory’s father and they know who he is. Rory uses his powers to track the demons throughout the city, and Frank realizes they are headed for his house. Rory races away and Etrigan attempts to stop him, but Rory breaks free and continues on.

He finds the house filled with bodies tangled in a giant web, but it’s no one he knows. He fights off many demons in the house, and stumbles across Frank’s wife, Mandy. He asks if Frank Jr. is alright, but he’s not because he was the one that did all this. He’s their new Anchor.

Analysis: Ray Fawkes’s script continues to just drag. The plot moves at a snails pace, and we continue to not have reason to care about Rory. This whole series feels like a missed opportunity to me. Is feels as though it wants to reach a new audience, while it wants to cater to the old fans of Ragman, but it accomplishes neither. I see nothing in here that an old fan would love, and there is nothing interesting about the character to capture the imagination of a new reader. I just don’t care if I ever see Rory again once this series wraps up. The most interesting thing is Etrigan, and I’m not even that familiar with the character myself.

Inaki Miranda’s art is okay. The character design for Ragman is still very weak, and I’d welcome a change in look well past the halfway mark. At least it would no longer be an eyesore. His storytelling is serviceable, but could use some improvement. It’s just very basic in some moments, while in others characters overlapped multiple panels and it jumbled up the reading order. It also just doesn’t look good on a page when the panels bleed into the others for no apparent reason.

Eva de la Cruz’s colors are great when she over saturates the page in minimalist colors. The standouts to me were the pages with the demons speaking to their leader, and the following page with them making their way to Mandy and Frank Jr’s house. The reds and greens looked great together, and the blue added a creepy factor in the neighborhood. The rest of the time, I feel like it’s too much. The city looks too bright to be Gotham. The city glows as if it is the owner of a Green Lantern power ring. Yes, city’s have lights, but it needs to be toned down by a lot. The final scene inside the house was saturated with a lot of violets which clashes with Ragman’s weird glowy parts, as well as the yellow word balloon. It just wasn’t working for me there. I think the blues that were used outside the house would have worked better inside as well. Josh Reed letters this and does a fine job. His letter placement helped me find the flow of the page when the panels bled together. His yellow balloon choice helps you know when one of the rags is speaking to Rory, but there are too many different voices in there. It’s hard to tell when Frank was talking until after the fact.

Final Thoughts: This series continues to struggle to find its footing. The bogged-down storytelling along with the under-utilization of the art team’s skill set make this a disengaging read.