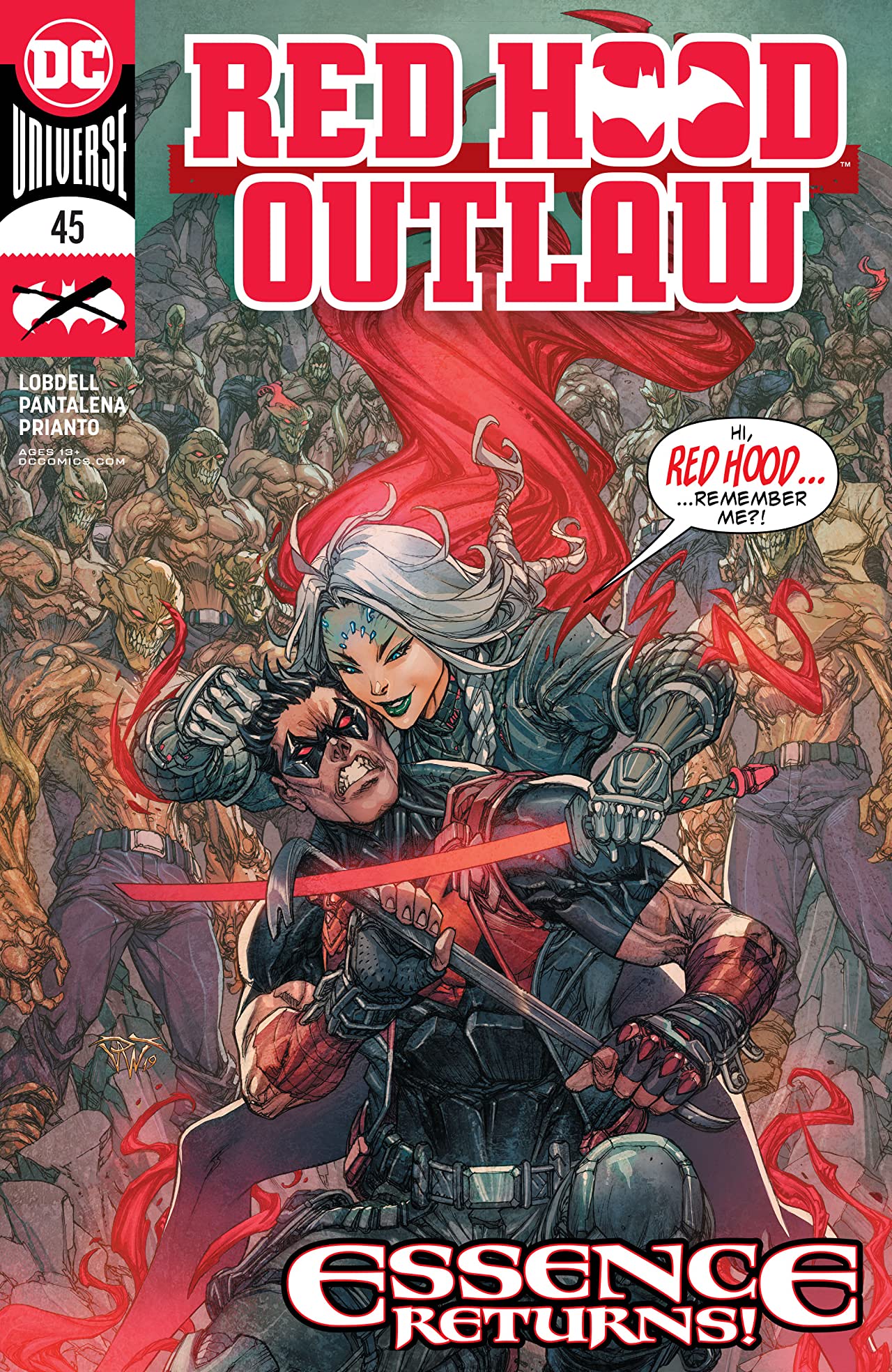 Overview: The Outlaws battle hordes of the Untitled, discover the purpose behind the obelisks, and things quickly go from bad to much worse.

Synopsis (spoilers ahead): Our issue opens up with a flashback to the time when Jason trained under Ducra. In the scene, he’s hanging off a ledge on The Mount of Eternal Despair, shouting up at Ducra that he’s going down into the pit and will bring Essence back alive (also, P.S., Ducra should be helping). Standing above Jason on the peak of the mountain, Ducra states that she thinks Jason is being an utter idiot and shouldn’t throw his life away for a worthless cause; her daughter failed her final trial and is deserving of her fate.

Jason smirks, listening to her with about as much consideration that he’s given every other authority figure in his life. He retorts that they’ll finish this conversation when he gets back. With that, he let’s go of the ledge and vanishes down into the pit below.

The story then jumps back into the present, where Jason, Bizarro, and General Glory are in the midst of a chaotic battle in Abul, the capital city of Qurac. Moments ago, the city was filled with peaceful student demonstrations but was suddenly taken over by an ancient race called the Untitled, who were hiding among the people.

Between the shooting, shouting, and fighting, Jason thinks back to the time when Ducra and the All-Caste taught him how to hunt and kill the Untitled. In his opinion, this bad-but-currently-getting-worse situation is his fault; Jason chose to walk away from Ducra and her instruction to seek revenge on Batman and the Joker. Jason thought that the Untitled had all been killed off. In his opinion, the only good thing about their situation is the fact that Artemis is bound to be having better luck than him and Bizarro.

Artemis…isn’t really having better luck than Jason and Bizarro. She’s facing off against Essence, swords drawn, and demands to know how Essence escaped from her blood blade (which Jason trapped her in a few issues ago). Essence says that she didn’t, not really, and in a flash of light reveals the woman whose body she’s possessing. Artemis is shocked to see Isabel, a friend (and on-slash-off again girlfriend) of Jason’s, who begs Artemis to save her.

Using this surprise to her advantage, Essence reappears and stabs Artemis right in the gut.

Just as General Glory’s bodily transformation into the Unspoken is completed, six obelisks burst from the ground, forming a circle. As Jason tells Bizarro that, hey, at least they’ve found the obelisks, he realizes he might know what they’re for. (Hint: nothing good).

Jumping back to the ladies, Essence (with her blade freshly out of Artemis’s stomach) is enraged when Artemis not only disbelieves her theory that Jason would threaten the world but retorts that Essence of all people should know better. Going in for the final kill, Essence is stopped by the sudden appearance of a woman wearing glowing armor.

Artemis stares in hope and amazement; Mistress is back.

Halfway across the world in Marlboro, New York, The Generation Outlaws lounge in the living room of Ma’s Home for Wayward Children, voicing their thoughts about Monsieur Mallah. He and The Brain showed up in the last issue to apply for the open job position at Ma Gunn’s home. The panels zoom out to reveal that Ma Gunn and The Brain are assessing the kids’ capabilities and watching them through a security camera. The Brain tells Ma Gunn that this is the most poorly conceived idea in the world and really, what could go wrong? Ma Gunn says that they deserve a chance, for the kids might still surprise them.

Back in Qurac, the ‘this-is-the-end-of-the-world’ vibe has really taken off as magic bursts forth from the obelisks, connecting each to the other. The ground cracks open and then implodes, revealing an entrance to The Chamber of All—a mystical labyrinth that the Untitled use to travel virtually anywhere in time and space. Jason tells Bizarro that this should be impossible as the (supposed) only entrance to this labyrinth is in the Himalayan Mountains, protected by the All-Caste.

Jason stares at the disaster below their feet. “Way worse than bad, B.”

Finally, we’re left with a one-worded teaser for issue #46; Trigon.

Analysis: On the whole, I think this issue was engaging and the art was well done. Similarly, to the last issue, there aren’t many character moments or interpersonal interactions between them, which is my jam, so I’m sad we don’t really get that in this issue. The plot is moving along and the writing (for the most part) flows nicely. I’m also a big fan of the coloring and the way the panels are laid out (kudos to Paolo Pantalena).

While this isn’t my favorite issue or story arc of Red Hood, I think it did a good job of leading the conflict to its climax. The Untitled have opened a gateway to their Chamber of All, (which should be impossible). They’re clearly trying to achieve something (which is still unknown), and the head honcho of the Untitled, the Unnamed, has joined the party (and is possessing the body of another hero).

One thing I was hoping for in this issue was an Essence/Isabel and Artemis team up and the chance to see how them working together might reveal more of themselves and their relationship with Jason. I am, however, excited for the return of Mistress; It was pretty apparent during the fight between Artemis and Essence that the Amazon’s strength is not what it was in past issues. I’m curious to see how that will change now that she’s reunited with her weapon and how it’ll affect her character.

Furthermore, while it was nice to get back to the Generation Outlaw, I don’t think this scene fit well with the flow of the issue. I’m assuming that they’ll have some role to play in future issues (as it’s insinuated that Ma Gunn has a plan for them), but I think the story would have been smoother had the scene been placed at a different moment.

Overall, this issue was eventful with a deepening plot and good art. I’m looking forward to seeing how the story progresses, specifically how it will further grow the Outlaws and their dynamic together. Also, a tease at Trigon coming into the picture? Sounds gnarly.

Final Thoughts: The plot picked up, and the story is reaching its climax; I’m interested to see what happens next and how it will affect the Outlaws!