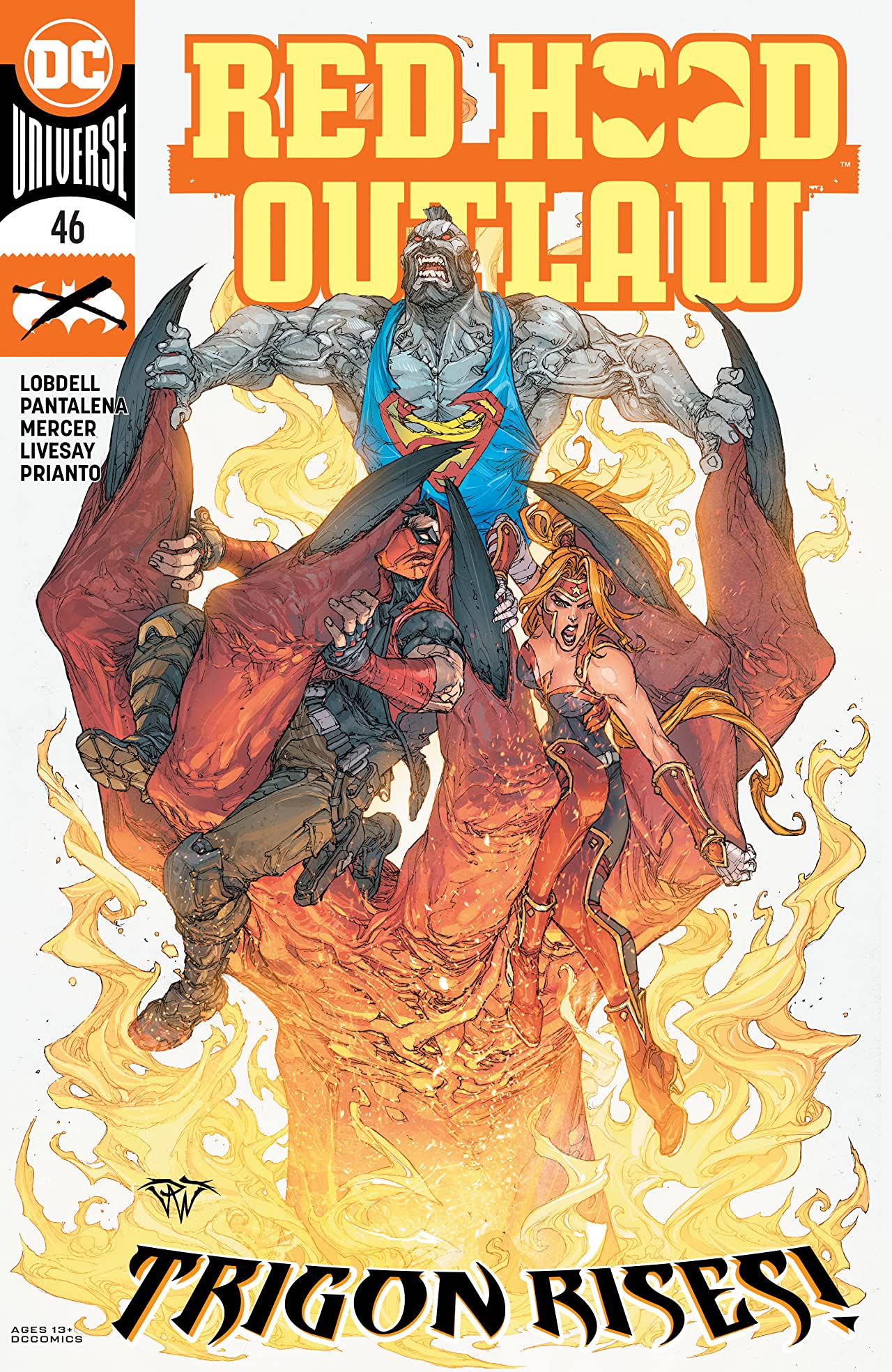 Overview: The Outlaws team up to journey into the Chamber of All and save the world.

Synopsis (spoilers ahead): The issue begins with a flashback to Artemis’ past. It illustrates a time after she had left the Amazon of Bana-Mighdall. Before becoming a gun for hire, it was a time when she simply traveled the globe in search of herself.

In a house in Cape Town, South Africa, Artemis runs through a room as explosions sound behind her, cradling in her arms a baby. She’s there as a Red Cross nurse, helping other first responders rescue people from the burning building.

Artemis declares that she is going to stop the invading aliens to protect the lives of those fleeing and hands the baby off to another nurse. As she goes to reach for a MacGyver-ed weapon (a table leg) to fight back with, she moves away rubble and is shocked to find Mistress. She remembers what Nephthys (the goddess of the armory) told her, “your weapon chooses you.”

Jumping back to the present in Abul, Qurac, Jason and Bizarro stare at the Chamber of All and their former handler with the U.S. government, General Glory. The older hero is currently infected by an ancient entity known as the Unspoken, the leader of the Untitled. At Bizarro’s questioning look, Jason explains that the Chamber of All is an ancient labyrinth that can take you anywhere you can (or can’t) think of. By taking control of someone with power (i.e. General Glory) they’re using him as a ‘metaphysical piggyback’ to stay in their reality.

Thankfully, Jason knows exactly how to handle this particular problem and rams his all-blade right into the general’s gut. About thirty seconds later, the general is saved, freed from the infection of the Unnamed, and preparing to get back in action.

Switching scenes, Artemis, Mistress (still in her human form), and Essence kind of hash things out and join up. After a touching reunion between Artemis and Mistress, the two of them and Essence have a short conversation that clears the air and puts them all on the same team. Mistress, with an ability Artemis is amazed to discover, then teleports them all without an explanation to an alley…somewhere. The alley is deserted except for a homeless man, huddled against one of the walls and begging for salvation. Essence quickly recognizes the voice and to her shock identifies the man to be S’Aru, the protector of the Chamber of All.

Back in Qurac, Jason, Bizarro, and General Glory attack the Untitled as General Glory recounts what he learned while he was infected with the Unnamed. The Untitled has been around since the dawn of man and were quite numerous until the All-Caste rose up and started killing them. Fleeing, the Untitled went underground, so far that they made a deal with the devil. Finally, the fruit of that bond is being born.

The ladies, plus S’Aru, then meet up with the others presently fighting the Untitled. It’s quickly sorted that Essence is not their enemy, the traitor she thought was Jason is actually S’Aru, and said traitor/really old protector of the Chamber of All isn’t actually the traitor because he never thought the Untitled’s plan would work.

Unfortunately, the Untitled’s plan is working; S’Aru explains that Trigon of the Dark Dimension is trying to get through the chamber to rule over an infinite number of realities. The good news is that S’Aru has been preparing for this all along by gathering all the heroes present to stop Trigon and the Untitled by destroying the Chamber of All.

As Jason states that they can accomplish their mission by closing the ante-chamber, Bizarro and General Glory come up with a strategy to attack.

After a few moments of game-planning, Essence approaches Jason and apologizes for believing that he was the traitor. Jason tells her no harm, no foul and that he’s happy she was able to escape from the blood blades, which he didn’t think was possible.

Artemis, preparing to join the others, turns to speak with Mistress and is surprised to see that her weapon is once again just that. She calls it to her and once the ax is in her hands, her disguise disappears, and Artemis in all her red hair and Amazon costume is back.

Prepared for battle, the group descends into the Chamber of All, led by S’Aru who opens a doorway and ushers them through. As the others enter through the opening, Jason hangs back to check in with Bizarro one last time. Jason says that he feels like he’s abandoning him and asks if Bizarro is sure that he’ll be able to handle Trigon by himself. Bizarro brushes off the concern, shoos Jason away, and declares that he’s got this as a massive clawed-hand surrounded by fire rises up to seize him.

Analysis: I’m going to kick this review off with the positives. First, similarly to the previous issue, I enjoyed the artwork and the layout of the panels. I also really liked the moment between Jason and Essence near the end of the issue, and I did get my wish to see Artemis and Essence team up (well, more or less). On top of that, I’m super happy that Artemis is back in her costume from past issues. It’s been a minute since the Outlaws really looked like themselves, and I think Artemis regaining her look from the beginning issues is bringing the story back to its roots.

On the whole, however, I didn’t think this issue showcases Lobdell’s strongest writing as the flow of the story felt a bit disjointed and some of the moments were anticlimactic.

For example, the scene with General Glory. I was definitely expecting the whole “infected-with-the-Unnamed-shoot-this-is-really-bad” thing to be a big issue, but it was solved basically within a page and had no consequences. (If only all of my life problems worked out that smoothly and quickly).

Additionally, while it was fun seeing Mistress interact with Artemis and Essence, I had to make quite a few assumptions about her character. For instance, I’m assuming (unless I missed something) that Mistress was able to heal Artemis from the wound Essence dealt her in the previous issue, as she’s perfectly fine in this one. I’m also assuming that Mistress knew who and where the true traitor was (a.k.a. S’Aru) and transported them there. Also, I’m still confused about that little piece because the whole “traitor to the All-Caste” issue doesn’t seem to be a concern to Essence anymore.

That aside, I do really like the friendship between Jason and Bizarro and how it’s clearly illustrated, but I am really hoping we’ll get more scenes that show all three of the Outlaws interacting together. I feel like it’s been a while since that dynamic has been focused on in recent issues, and it would definitely be neat to see how Lobdell develops it.

Final Thoughts: Although this issue didn’t really satisfy me, I’m still very much interested in seeing what Lobdell has imagined for the next few issues and how the story will end!